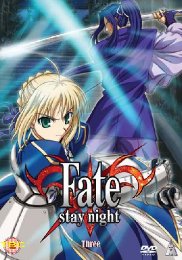 Synopsis:
Ten years ago a secret war was fought by master Mages with their Servants in order to obtain the Holy Grail and the powers it was believed to possess. The result of the bloody conflict proved to be devastating to everyone. Today, another Holy Grail War is about to begin, but this time with new masters raging to win the hallowed prize.

One such master is Shirou, a self-styled champion of justice who eschews the mask and cape get-up of most heroes in favour of being himself - a quietly helpful, self-sacrificing and principled individual. The only survivor of a tragedy that cut a swath of destruction through his home town ten years earlier, Shirou recently witnessed an altercation between two supernaturally skilled warriors and was soon drawn into a battle between seven Magi and their seven Servants, a group of resurrected legendary warriors from around the world.

Obsessed with obtaining the Holy Grail at any cost, Shinji and his servant, Rider, press their attack on a still weakened Saber. Thus it becomes imperative for Saber to begin training Shirou to improve his martial skills and aid her in the battles to come. When the final confrontation with Rider comes along, Saber is forced to reveal her hand. Who is she really? Saber's true identity is finally exposed, but which Epic Hero is she?