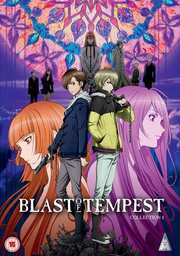 Synopsis:
One day, a sorceress princess was stuffed into a barrel and banished. One day, a single girl was suddenly murdered, and the culprit still runs free. And one day, a battle spanning time and space over magic and revenge began! Sanity and madness, sense and intelligence, self-confidence and convictions. The tragic tale of this irrational world starts now.

The Kusaribe family is a family of sorcerers under the protection of the “Tree of Origins”. Their princess, Hakaze Kusaribe, was the greatest sorceress of their family. But Samon Kusaribe, a member of their family seeking to resurrect the “Tree of World's End”, a tree that opposes the “Tree of Origins” and controls the power of destruction, stuffs her into a barrel, and banishes her to a deserted island. From the deserted island, she sends a message out to sea, which is picked up by Mahiro Fuwa, a young boy who's sworn vengeance upon the criminal who killed his little sister, Aika. Mahiro agrees to help Hakaze under the condition that she find Aika's killer with her magic. But once Mahiro's best friend and Aika's lover, Yoshino Takigawa is rescued from danger, he too gets dragged into this tale of revenge.