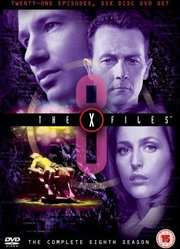 Synopsis:
The start of Season Eight sees Scully and Skinner desperate to start the search for Mulder. New Deputy Director Kersh however has different thoughts and has assigned a special taskforce to take over the search, headed up by Special Agent John Doggett (Robert Patrick). As the search for Mulder intensifies Scully slowly begins to open up to Doggett whom she must work alongside. With Scully assuming the role of believer and Doggett that of confirmed sceptic, the pair become partners....