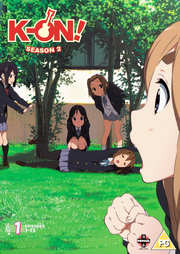 Synopsis:
For two full years, Yui, Mio, Ritsu and Tsumugi have worked together to keep Sakuragaoka Girl's High School's struggling Light Music Club alive, and along the way they've begun to build a reputation as real rock musicians... especially since the previous year's addition of underclassman rhythm guitarist Azusa. But as a new school year begins, there are new and scary challenges ahead.

With four fifths of the club graduating at the end of the year, replacement members have to be recruited. There are college exams to prepare for, colleges to choose, and friends to prepare to say goodbye to. But no matter what happens, they'll have their faculty adviser and secret former death metal guitar/vocalist Sawako Yamada there to help them in her own unusual way, especially since she's now their homeroom teacher as well!

Most of all, they'll have each other. The group of amateur musicians who barely knew each other has become much more than just a band, and by the time this school year is over, they're going to achieve something so amazing it requires multiple exclamation marks!!