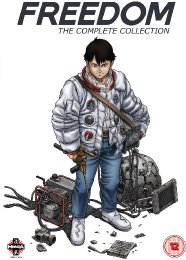 Synopsis:
The year is 2267 and, following a global catastrophe that rendered the Earth uninhabitable, mankind has settled in a vast, domed moon colony originally intended to be a stepping stone for manned space missions to Mars. Known as Eden, this artificial environment provides a peaceful, albeit heavily regulated, existence for millions of people. Among them is 15-year-old Takeru, who, along with many other boys his age, spends most of his free time racing souped-up Lunar Terrain Vehicles for fun. As a punishment for crashing his LTV on a public road during one particular race, Takeru is sentenced to several hours of "volunteer" work, which involves doing routine maintenance checks on equipment on the lunar surface outside Eden's dome.

During one of his "volunteer" shifts, Takeru witnesses an object falling from the sky and goes to investigate. At the crash site he discovers the remains of a small capsule bearing several relics seemingly sent from Earth, including a photograph of a pretty girl and some younger children and bearing a cryptic, handwritten message on the reverse. Immediately infatuated with the girl in the image, Takeru is convinced that the photo is evidence that the Earth is once again supporting human life and begins a voyage of discovery that will not only send him flying across the vast reaches of space but will also shake the Republic of Eden to its very foundations.

Special Features:
Introduction Trailer
Freedom Digests
Talking About Freedom Session 1
Talking About Freedom Session 2
Freedom In The USA 1
Freedom In The USA 2
Another Vehicle Race
Nissin Cup Noodle TV Commercial Digest
Freedom: The Hope
Fly Me To The Moon 1 (The Apollo's Journey)
Fly Me To The Moon 2 (From The Apollo To Freedom)
Next Episode Trailers
Messages From The Characters
Opening Credits
Closing Credits