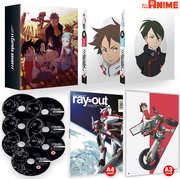 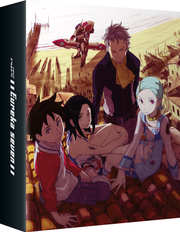 Synopsis:
Relive the classic era of anime with the studio that brought you Escaflowne, Fullmetal Alchemist, and Wolf’s Rain. Returning to the spotlight after almost a decade, Eureka Seven – the greatest anime love story ever told – makes its long-awaited arrival on Blu-ray!

Renton is a teenager trapped working as a mechanic in a backwater town. He dreams of joining up with a daredevil group of pilots known as Gekkostate and following in his father's heroic footsteps.

When a mysterious beauty named Eureka shows up asking for a tune-up, Renton soon finds himself drawn into a high-flying mecha dogfight that makes him a target of the military. When the dust settles on the spectacular battle, Renton is invited to join Gekkostate, but he soon discovers that even a dream come true has a dark side.

Special Features:
The entire series, 50 episodes, in both English and original Japanese with subtitles
The discs will be housed inside two separate digipacks (both exclusive to this Ultimate Ed.) and those digipacks will then be housed inside their own rigid case (that is also exclusive to this Ultimate Ed.)
Also included an exclusive A3 sized poster (pictured bottom right) that will be house on arrival inside its own poster tube inside the same box as all the other contents.
An exclusive A4 sized 144-page Art Book that has art split into 5 sections -
Part 1: Characters
Part 2: LFOs
Part 3: The World of Eureka Seven
3.1: Settings
3.2: Props
Part 4: Animation in Action
Part 5: Artworks

On-Disc Extras across the 6 x Blu-rays and 1 x DVD disc: