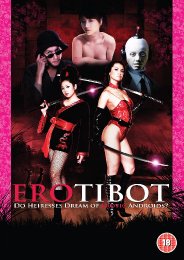 Synopsis:
Can love prevail over sex, money, androids, and ninjas?

Tamayo (Mahiro Aine) is so adorable! From the time she was small she has been treated as the ultimate princess! Tomayo, is heiress to her wealthy family's fortunes. In order to protect her from outside danger she is looked after by three android bodyguards. The first android is masterful and good looking. The second has beastlike strength, and the third is a clumsy misfit who can't seem to get anything right. He fantasises over his mistress and is adored by her. Together, the three androids help detect danger, and serve Tomayo during the day, and occasionally engage in after-dark 'bedroom protection' as well... Life is good!

Meanwhile another family member, Tsukiyo (Japanese AV star Maria Ozawa) who is jealous of Tomayo, hires a private detective to spy on her. He uncovers a dark secret that Tomayo is in fact the "bastard daughter" of a servant. When Tsukiyo discovers this, she is consumed by rage believing Tomayo to be an embarrassment to the family and not 'pure blood'. Along with her servant Azami (Asami, The Machine Girl, Robogeisha), she plots to regain the inheritance she believes to be hers!!! Can she distract the three Androids long enough to exact her plan?! Who will the Androids serve in the end?! Which Android will win Tamayo's love??!!