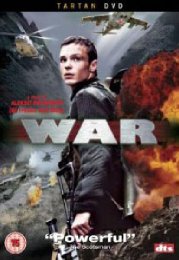 War. What is it good for? Absolutely nothing. Say it again...

If there's one thing that the human race has proven to be good at over the time of its existence, it's war. Not necessarilly good at the actual art of war, more at starting wars and then just letting them fester. The Chechen conflict is one such festering war, initiated really by a dying Russia as its Warsaw Pact started to collapse in the aftermath of the Berlin Wall coming down. Chechnya was one of the states that attempted to break away from the Soviet Union, a move opposed by Russia who stated that Chechnya was not an actual state or independent entity and therefore did not have the right to secede. The first Chechen War was fought between 1994 and 1996 as Russia attempted to take back control of the fledgling nation, brought to a halt by a proposal of a ceasefire by Russian President Boris Yeltsin. The second and current Chechen conflict was controversially started in 1997 by a series of domestic bombings in major Russian cities that killed 300 Russian civilians. This bombing campaign was blamed on Chechen separatists but is thought by some to have possibly been the work of the Russian secret service in an attempt to justify a new campaign.

War, a 2002 film by Russian director Aleksei Balabnov, looks to examine this conflict a little. The story centres around the events that occur when British actor John (Ian Kelly) and his girlfriend Margaret (Ingeborga Dapkunaite) are kidnapped by Chechen rebels during a tour of Shakespear's Hamlet. Transported along with some Russian prisoners, John and Margaret are taken to a remote village in Chechnya and thrown into a hole containing some Russian conscript soldiers. The British couple are held to ransom, but Chechen rebel leader Aslan (Giorgi Gurgulia) starts to get frustrated and irate when the ransom of £2 million doesn't materialise. Thanks to some rather deliberate dodgy translation by the young Russian Sergeant called Ivan (Aleksey Chadov), Aslan is convinced that John can gather the £2 million and decides to let both him and Ivan go, giving John two months to get the money back to him or all his men will rape Margaret before cutting off her head. Ivan is convinced that its a trick and that Aslan will kill them all, and is therefore quite surprised when the Chechen leader keeps his word.

Back in the UK, John is frustrated by the inability of both Government and his friends to help him rescue Margaret. Selling everything he has, John can only raise £400,000 but following a televised appeal receives an offer of £200,000 from Channel 4 on the condition that he takes a handheld camera from them and films everything that happens, identifying everyone involved. John then heads to Russia and mets with the same blocks he did in the UK and is unable to either raise further money or get any kind of help. Tapping into previously unheld resolve, John traipses across Russia and finds Ivan in his home town. Ivan is keen to rescue a wounded Russian officer from Aslan and decides to help John. But the plan now isn't to deliver a ransom but to launch an assault on the Chechen lair...

**This is a Sainsbury's exclusive**

The cinematography is quite special in this film, highlighting as it does the beauty of the Chechen scenery and juxtaposing it against savage imagery of war. This was recognised by the Russian Guild of Film Critics who awarded this film an award for Best Cinematography.

A rather fascinating mid-length featurette that not only explores how the film was made but also the background to the story and the difficulties in getting co-operation from the authorities and military. Balabnov is rather scathing about technical advisors from Moscow who he says "know nothing", preferring to use local men who actually fought in the conflict to provide the expertise on how things should look and be filmed. It's also clear that a huge amount of bribery is involved to get the Air Force to allow the filming of their equipment, with the money being paid not necessarilly guaranteeing co-operation, as the agreements could always be overruled by senior commanders. Not sure how much they paid for the two strafing runs by jets as they were very fleeting, but the use of helipcopters towards the end of the film looks rather good.

There's also some trailers for the film and a Tartan trailer reel.

Sometimes it takes a while for foreign films to make it to the UK for DVD distribution, and just sometimes the wait is worth it. War is one such film, bringing with it a different perspective on a real conflict in a foreign land and refusing to either sugar coat actions or motives and also refusing to succumb to the movie tradition of big bangs and bigger explosions.

Let's look at the action first. It's been described in some places as either boring or anti-climatic, but it's neither - simply realistic. The problem is we're used to celluloid action set pieces where shootouts are more like choreographed dance pieces with bullets. Balabnov shows us action as it really is. Sometime quick and brutal with civilians caught in the middle, sometimes slow and tense with endless shooting from a defensive position against advancing forces that does nothing in particular and then maybe takes out one or two men. This is how it is, as those on the front line in Afghanistan can attest, probably the nearest example I can focus on where people can relate. It feels real and looks very realistic, with the majority of those involved not being trained soldiers.

The acting is rather good from the main cast with both Aleksy Chadov and Ian Kelly standing out in their respective roles as Russian conscript and bewildered actor. They have good support from the rest of the cast in a film where despite the depiction of the Chechen rebels as a rather savage group of soldiers (beheading prisoners for the internet and raping women for their own amusement), the tag of bad guy falls where you least expect it - landing as it does on the head of Ian Kelly's character who has filmed everything that has happened. This selfish act of not editing any of his footage makes his character a very famous person, but places the one man who helped him in a lot of trouble with the Russian authorities. Ivan bears no grudges against John for doing what he did, but it's telling that he narrates that he hasn't heard a word from John since they parted after their escapades. I'm just wondering if Balabnov was using this in a wider context of criticising those foreign correspondents who make their names from embedding themselves within various factions around the world. Do they ever think about the people they left behind after delivering their news footage to their editor?

Quite a thought provoking film in the end, this one. And rather fun to watch as well. I think director Aleksei Balabnov could be someone to keep an eye on...