DVD
Through A Glass Darkly (UK) 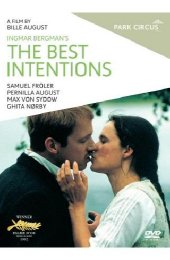 Synopsis:
The Best Intentions is the story of a family and a bygone era played out against a backdrop of a Sweden stifled by a rigid class system and in the throws of a General Strike. Poverty stricken young Henrik (Samuel Fröler) meets a beautiful and vivacious upper class girl, Anna, (Pernilla August) who is adored by all, especially her father, the affectionate but ailing Johan (Max von Sydow). They fall in love despite the opposition of Henrik's mother, the pitiful and asthmatic Alma (Mona Malm), and Anna's mother, Karin (Ghita Nørby), the real ruler of the family.

With love and not a little pain, Ingmar Bergman depicts his parents and their complex love story over a decade of upheaval - from 1909 when they first meet to the summer of 1918 when Bergman was in his mother's womb, about to embark on his own journey through life. As the author writes, it is all a game but a game that nevertheless requires considerable effort.