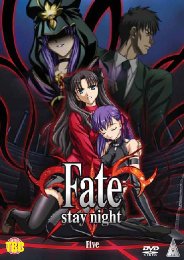 Ten years previously, a secret war over the possession of the Holy Grail raged between mages and the powerful servants they had summoned. It was a conflict that laid waste to Fuyuki City, and the sole survivor, Shirou was rescued by a mage and adopted as a son. Shirou Emiya has an instinctive rapport with machines, and can sense how things are supposed to fit together, but before his father died, he was told that he had no magical talent at all. Having inherited the Emiya estate, he now lives alone, and goes to high school in New Fuyuki, but his past has left a mark on him. His ambition is to help people, and become a champion of justice. He's unprepared for the havoc that is to come. New Fuyuki will be the battleground for a new Holy Grail War, as seven mages will draw forth their servants and clash. He's also unprepared for the fact that he will be one of the mages, and he's totally unready for summoning the most powerful servant of them all, a cute girl named Saber. Now it's up to him to prevent the destruction that previously devastated his home.

The next four episodes of Fate/Stay Night are presented on this MVM disc.

13. Mark of the Witch
You'd think that following the difficult battle against Berserker, Shirou, Saber and the others would have had time to catch their breath, but even their breakfast is interrupted by the news of another 'Gas leak' incident. It means that Caster is up to her old tricks, sapping mana from random citizens, and it's only a matter of time before a fatal incident occurs. Saber, Shirou and Rin get together to plan their next move, but it's actually Illya who has a vital piece of information. Caster is a mage type Servant, meaning she has the power to call a servant all of her own, and kill her own Master in the process, replacing him with an easy to use puppet. Her own plans to obtain the Holy Grail are in full swing, and Shirou's playing catch up. They are surprised to learn the identity of Caster's new Master, but the shock is that Caster is prepared to summon the Grail, and all she needs is a Magus to sacrifice. Shirou's house is full of Magi, or potential Magi. 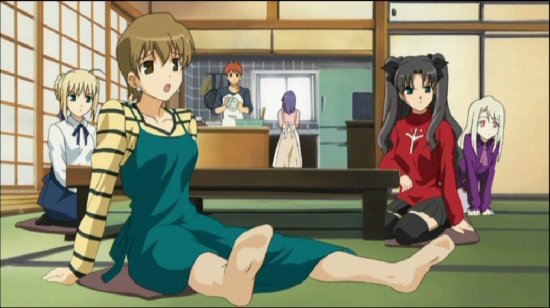 14. Decisive Battle
Shirou, Rin and Saber head to the Ryudoh temple on a rescue mission, before Caster can sacrifice her victim. But the true temple is one that Caster has magically constructed underground, and there are foes aplenty for them to face, not counting the Harryhausen skeletons raised from the dead. Saber comes face to face with Assassin once more; Rin has to face Caster herself, while Shirou has to face his… schoolteacher?

15. The Golden King
No one was expecting the battle to be decided by another Servant, one with completely different goals from everyone else. He's there for one reason, and one reason only, Saber. This Golden Servant isn't even part of this round of the Grail Wars, he's a survivor of the previous one ten years ago, and he has power that outclasses even Saber. When Shirou wonders whether it's through winning the Grail War that the Golden Servant is now able to live in the real world, it becomes time for Saber to tell Shirou what truly happened ten years previously, and what kind of man Kirutsugu Emiya, Shirou's father, actually was. 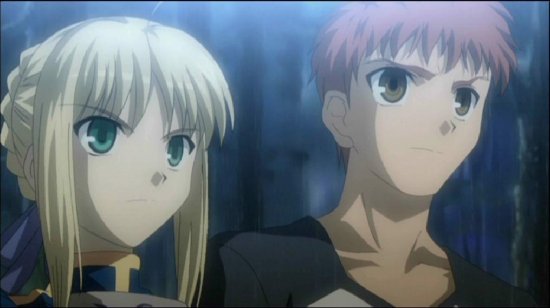 20. Distant Trace of a Dream
Shirou's finally realising the depths of his feelings for Saber, and although he started this in the hope of ending the Grail Wars for good, he would now rather use the Grail to grant his wish and have Saber stay with him. The trouble is that Saber's sole thought is to use the Grail to get back to where she belongs, and fulfil her duty to her people. The way to solve this of course is to go out on a date. Rin offers to help Shirou 'plan the battle', but you know when two people are of such different mindsets that it will end badly. Just not for the reason that you were expecting though.

Fate/Stay Night gets a 1.78:1 anamorphic transfer. It's an NTSC-PAL standards conversion of course, but it's the best one that I have seen in a long time. The animation is smooth, there's certainly no ghosting, judder, or problems with aliasing, despite all the dark scenes and well defined edges. In fact the only indication of a conversion that I can spot is an overall but not excessive softness to the image. The anime is impressive, well animated, with good, memorable character designs, a pleasant world design, and fluid and energetic motion. 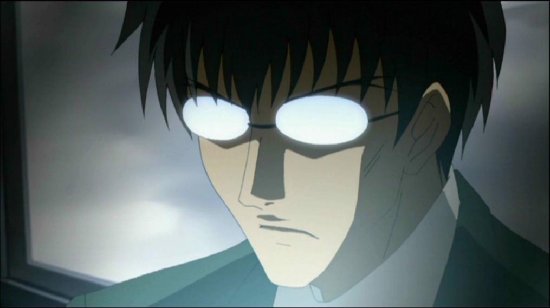 We have just the basics for the audio, with DD 2.0 English and Japanese soundtracks, with optional translated subtitles or signs. The dialogue is clear in both versions, although I must state that I found the dub to be surprisingly inferior given the current state of anime dubbing in the US. It's been a long time since I watched a dubbed anime that actually sounded cartoonish, and it was a shame to see this particular blast from the past. The music itself is fairly innocuous and forgettable, despite Kenji Kawai's name over the end credits.

It's your usual anime disc treatment, with animated menus and a jacket picture for when the disc isn't spinning.

This time, we just get a two-minute promo video, and two minutes worth of television adverts for the show. The trailers on this disc are for Black Lagoon Season 2, and Daphne in the Brilliant Blue. 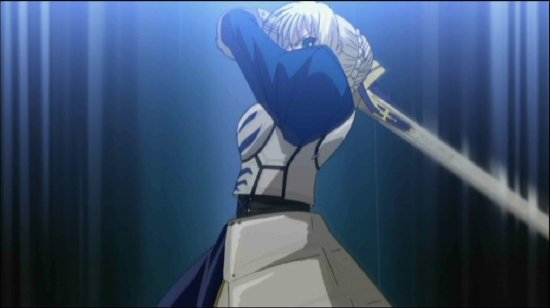 The penultimate volume of Fate/Stay Night arrives, and suddenly I'm feeling ambivalent about the whole thing. This volume is certainly entertaining and exciting as it stands, but taken as part of a whole, a chapter in an overall story, I'm getting that sinking feeling that all isn't well in the world of Fate/Stay Night. We have further developments in the Grail War, more battles to fight, more sacrifices to be made, and several unexpected twists and turns. We also have the Shirou Saber relationship develop, and take a decidedly romantic turn, which threatens to bring back the harem silliness of the first half of the series, but wisely pulls back before it gets too ridiculous. But then it takes it a twist too far, and in the cold light of day, I'm asking, if this is the story that I set out to watch, or something else entirely? The answer isn't a reassuring one. 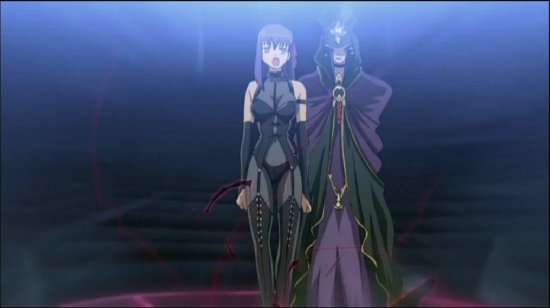 As we begin this volume, it looks like we are about to enter the endgame of the Grail Wars. Certainly, with the battle traditionally consisting of seven mages and their servants, we've pretty much seen the lot at this point, Saber, Rider, Lancer, Archer, Berserker, Caster, Assassin, Sneezy, Grumpy and Dopey. So you think that when Caster kidnaps Shirou's friend to use as a sacrifice to summon the Holy Grail, that there isn't much more that the story can throw at us. The big twist here is the identity of Caster's Master. He turns out to be Shirou's teacher from school, Mr Kuzuki. And Mr Kuzuki is one spanner short of a toolkit to say the least. It looks to be shaping up to be a suitably climactic confrontation, Saber versus Assassin, Shirou versus Kuzuki, and Rin versus Caster, the sort of three-way confrontation that takes place at the end of a Star Wars movie. 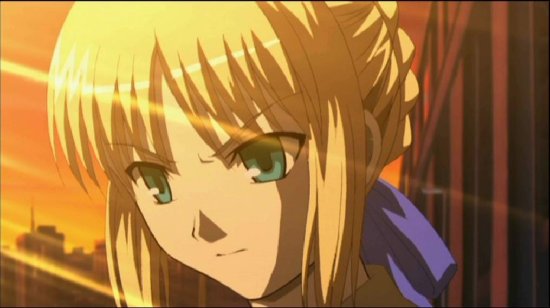 Then we take an almighty detour, as the Golden Servant shows up, looking for his ex-girlfriend Saber, he's so powerful that he ends the battle in the blink of an eye, and now we're exploring a new paradigm where the Grail actually doesn't matter anymore, and it's all about winning the heart of Saber, the traditional way for Shirou, and through excessive violence on the part of the Golden Servant. At this point consistency and continuity seems to take a back seat. We finally get to hear something about the battle that destroyed the city ten years previously, it seems that both Saber and Golden Servant were combatants in that fight, and for some reason Golden Servant stuck around in the mortal realm afterwards. It could be because he drank from the Grail, which offers an opportunity for Shirou, who has now realised that he is in love with Saber. He's so much in love in fact that when she tells him about the events ten years previously, detailing actions on the part of Kirutsugu Emiya, Shirou's adoptive father, that paint him in a new and wholly malevolent light, that his response is pretty much, "M'Okay… will you go out with me?" Four volumes ago he would have sunk into despair and depression at such a revelation. 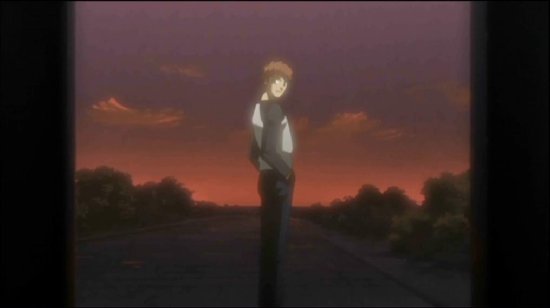 Also, incidental character syndrome strikes in this volume. The Golden Servant is random and unmotivated enough, but the sudden presentation of Mr Kuzuki as a sociopath serial killer type raised my eyebrows to the point of muscle strain. That he's Shirou's teacher is curious enough, but I'm hard pressed to recall if he is actually in the earlier episodes at all, or if they just made him up at this point, and pretended that, yes, we actually know who he is. Then there is poor Sakura, kidnap victim, making breakfast for her brother's murderer, and occasional romantic interest and general comic relief for Shirou. Her character never really came to life for me, she was always the subservient stereotype, and it was hard to care when she got nabbed in this volume. But, at least we get to see her in bondage gear… 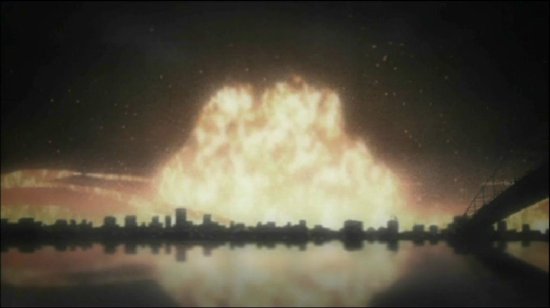 Fate/Stay Night did entertain me. There is a sense of fun and energy to it, the characters are likeable, and there is a degree of interest in seeing how the story will pan out in the end. But with this fifth volume, the impression is that the creators are making it up as they go along, and consistency is not even a priority for them. It is a mess of a story at this point, and it's down to the next volume to salvage a worthy conclusion. But at this point I fear that it will either be a conclusion that satisfies what the series started out to do, or a conclusion that deals with the Shirou, Saber and Golden Servant triangle, leaving the Grail War and Shirou's past out of the equation completely. To expect it to do both would be ambitious beyond belief.