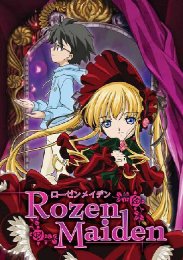 I've barely started with Rozen Maiden, and already it's coming to a close. The vagaries of anime release schedules are such that this 12 episode series, split into two volumes, is being released over two months, but the review discs turned up in the same fortnight. On the strength of the first volume, it's an interesting if unremarkable light comedy drama, with a hefty dose of the harem romance trope. I categorised the first half as the equivalent of comfort food, heavy on the calories, but light on the nutrition. But if the first half of the series is about setting the tone, exploring the world, and introducing the characters, this second half is usually where things get a little more serious and dramatic. Maybe this half of the series is where all the vitamins are.

Jun Sakurada is a wimpy teen, who after being bullied at middle school simply came home, pulled the covers over his head, and refused to leave the house again. That's despite the best efforts of his sister Nori, who keeps trying to coax him back to school. He's become a shut-in, a recluse, whose only joy is Internet shopping, and only thrill is keeping the stuff for the trial period, and then sending it back before he becomes liable for payment. Then one day he answers an ad that is unconventional to say the least. Instead of e-mail, he has to write a letter, place it in an envelope, and then put it in the second drawer of his desk. As if by magic, a trunk appears in the middle of the room, and within the trunk is a clockwork doll, and a key. After checking for underwear (well he is a boy), he winds up the doll, only for it to come to life and slap him. Shinku is awake now, and insolent though he may be, Jun is now her servant. A whole new world awaits… 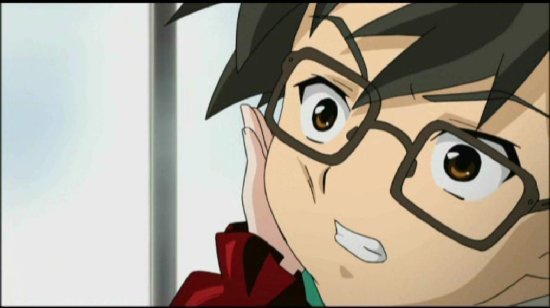 The second half of Rozen Maiden is presented on this disc from MVM.

7. Traume
When last we left the world of Rozen Maiden, Shinku had fallen unconscious, following a traumatic battle with Suigintou to rescue Hina-Ichigo. Now Jun is concerned, as Shinku refuses to wake up. Suiseiseki has an idea, dolls respond when their servants are put in danger, and she has a few perils for Jun to experience. Things only get worse when Hina falls unconscious as well (she was drawing her energy from Shinku). It's time for desperate measures; it's time to turn to the Internet. It turns out that there is a book on Rozen Maiden, and there is a copy in the local library, but the library is being remodelled, and the books are in storage in other municipal buildings. If Jun wants to help Shinku, he'll have to go back to the one place he hates and fears the most, he'll have to go back to school.

8. Lapislazuri Stern
Suiseiseki has a twin sister named Souseiseki. For years they were inseparable, Suiseiseki and Souseiseki both gardeners that complemented each other's abilities. But when they came into the ownership of a watchmaker named Shibasaki, all of that changed. The loss of his son Kazuki, and his wife's subsequent illness left Shibasaki emotionally damaged, and he started seeing Souseiseki as his missing son, treating her as such, and wholly overprotective. Suiseiseki wanted to leave, but her sister felt loyalty to the old man, and so the sisters separated for the first time. Now a chance reunion offers Suiseiseki the opportunity to 'free' her sister, but Souseiseki is still adamant. And where there is strife, Suigintou sees an opportunity. 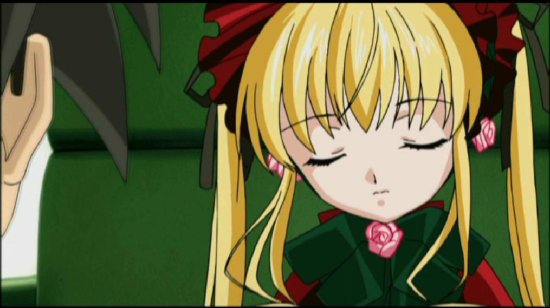 9. Die Gefangnis
Suiseiseki comes clean to the others about her sister's predicament, but rather than the ridicule she was expecting, she's surprised to see Jun willing to help her. It means going through the looking glass once more, but more than that, the doorway to dreams has been re-opened, and Souseiseki is trapped within. Suigintou has already taken Souseiseki's Lempicka power, but the real plan is more insidious, she wants Suiseiseki's Sui Dream ability as well.

10. Abschied
It's a pleasant day at the Sakurada household, at least for some. Poor Jun has to put up with four dolls in his home now, and Nori insists that they all have to help her practice for a forthcoming kindergarten play. She's the narrator, and they have to take on all the roles so that she can get the timing right. Suddenly Jun is blushing, as Shinku takes on the role of Snow White, and he has to be the Prince Charming who wakes her with a kiss. But Shinku is being remarkably genial and accommodating about the whole thing. She isn't punishing him at all, she isn't aloof, and she isn't being abusive. Maybe it's the fact that Suigintou has challenged her to a battle, to settle the Alice Game once and for all, which has changed her outlook. 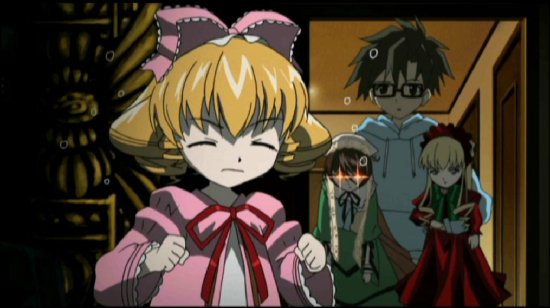 11. Schicksal
Shinku enters Suigintou's world, but it's all a trap. Suigintou has separated Shinku from her servant to deprive her of power, and she means to make the state of affairs permanent by using her recently acquired powers and sending Jun back into his dark dream world. With Jun forced to relive those moments that sent him into despair and isolation, he may wind up more broken than any doll. It will be up to Nori, Hina-Ichigo, and the sisters Suiseiseki and Souseiseki to save both Jun and Shinku, but they may already be too late.

12. Reiner Rubin
Jun made a promise to protect Shinku, but how can he do that if he's overwhelmed by his own doubts and fears? He'll have to face his demons once and for all. 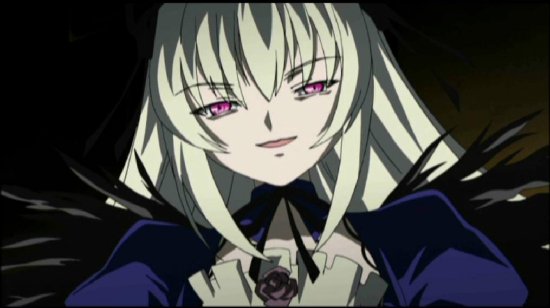 Rozen Maiden gets the, by now wearyingly familiar treatment for anime. It's a 1.78:1 anamorphic transfer, with the usual NTSC-PAL standard conversion applied. For Rozen Maiden that means a pretty clear and colourful transition to the DVD format, with little of the ghosting or judder associated with such conversions. That said, the bright and shiny animation isn't one to invite such issues, and the more important observation is that despite this disc having a decent six episodes to it, none of them are particularly marred by compression artefacts or the like. Rozen Maiden is an expressive enough animation, although not that full of energy and is occasionally quite static. There is an odd dichotomy with the way that the dolls are depicted in exquisite detail, while the human characters are a lot more rough and ready, simplistically designed, and with bold outlines. It all works well enough for the show however. 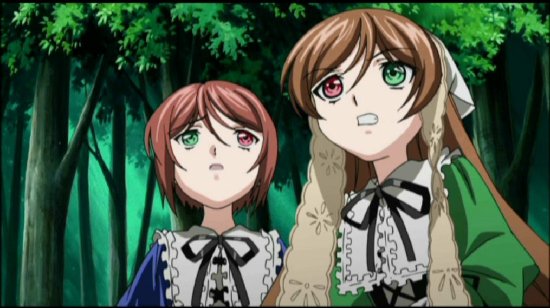 You have a choice between DD 2.0 English and Japanese, with optional translated subtitles or signs. The dialogue is clear, and the opening theme from Ali Project is by equal parts catchy and annoying, but perfectly suits the show. I found the Japanese track to be acceptable but uninspiring, although compared to the English track it's a godsend. Yes, this is one of those English dubs that are best avoided, even by dub fans.

While the Region 1 extras were distributed across 3 discs, we get them all here on volume 2. It's not much though; amounting to the textless credits, a couple of TV commercials, a promo video, and trailers for Fate/Stay Night, and Aquarion.

I like Rozen Maiden. I was pleasantly surprised by the first volume, which was light, fluffy, frilly and all the shades of pink you would expect from a show about living dolls, but also had a delicate shade of darkness to it as well, a sense of depth, and a story that managed to hold the attention. This second volume is even better, as it builds on these things, while still keeping the light and fluffy stuff for those who appreciate the finer things in anime. This second set of six episodes rounds off the main story arc with a very satisfying conclusion yet holds enough open for the inevitable second series. It also has enough room for some more silliness and frivolity as well. 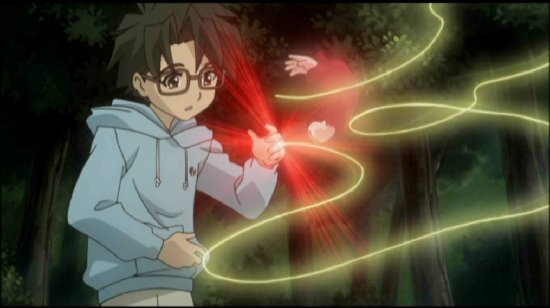 The dolls may initially have been unwelcome houseguests, but the first episode on this disc shows how Jun has become accustomed to them, when it appears that he may be losing Shinku. It's a nice way to show character growth, and that leads on into the next story, where we meet Suiseiseki's twin sister, Souseiseki. Souseiseki is trapped in a situation because of her loyalty, a situation that her more flighty sister simply walked out on, but her conscience nagging, she wants to help Souseiseki anyway. Suiseiseki is the most infuriating of the dolls in Jun's eyes, and the fact that he wishes to help her anyway elevates his character in Shinku's estimation, who usually berates him with accusations of insolence and uselessness. The twin sisters are interesting contrasts, with Souseiseki tomboyish, resolute, loyal and likeable, while her sister as we know is shrill, annoying and mischievous. The final three episodes are devoted to the series conclusion, although it begins with an episode of relaxation and light comedy, before the relatively big drama guns are brought out. 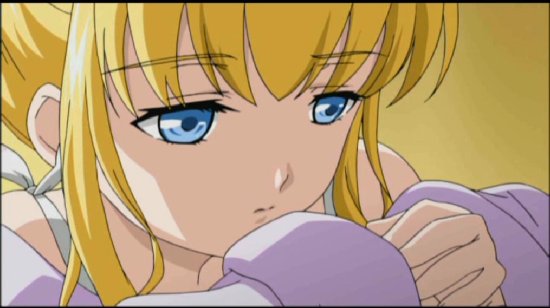 If I could have one criticism of Rozen Maiden, it's that it has been pretty thin on the ground when it comes to the story. That is if you consider the story to be the Alice Game, the various dolls that are fighting for the ultimate prize to be human, the mysterious 'Father' who set all this in motion, and the details behind the rules and methodology of this strange magical world. There are hints and asides as to what is going on, tiny little smidgens of back story, and there is even a development with Jun, intimating that he has certain mystical abilities of his own, that tantalise and promise much, but that promise is never delivered upon. 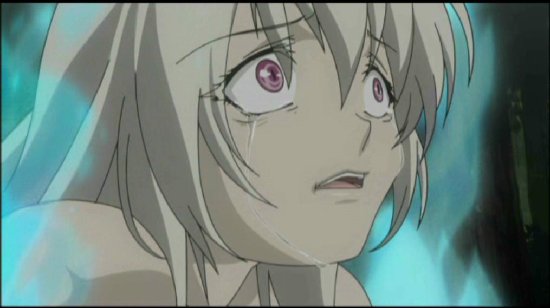 But that isn't the story of Rozen Maiden at all. It's all about Jun Sakurada, an introverted and emotionally damaged boy, who has taken refuge in his home when he became incapable of dealing with the real world. It's through the magic of the dolls that he encounters and the world that he is introduced to, that he begins to heal and re-engage with the world. This series is about his first faltering steps back to normality, and the balance of tough love and tenderness that Shinku provides, to help him take those steps. The Alice Game, and the affection that he develops for Shinku and the other dolls is what starts to heal him, and showing his progress from recluse to reformed character is what makes this show so appealing. In a story that is utter fantasy, it's a very strong, human element, one that gives this show a little relevance and realism. 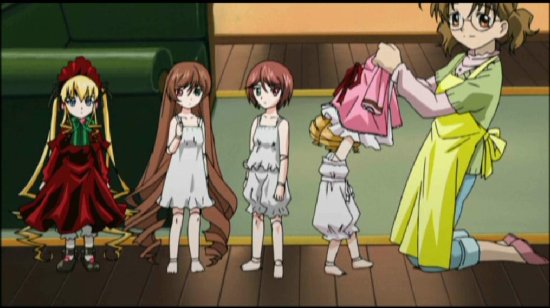 Rozen Maiden has turned out to be a very likeable and entertaining series. I may have had a couple of misgivings about MVM delving into Geneon's back catalogue once more, but this certainly isn't scraping the bottom of any barrel. On the contrary, this is a series that should appeal to a broad audience, and offer plenty of relaxing entertainment. Now all that's left is for MVM to announce when it will release the second series, Rozen Maiden: Traumend, and we may learn some more about this elusive Alice Game.