Last month it was Navarre looking to offload Funimation, this week it's the turn of Starz looking for a buyer for its entertainment properties, among them Anchor Bay Entertainment, which happens to be Manga Entertainment's parent company. Actually Anchor Bay bought IDT, which originally bought Manga from Palm Pictures and Island Records, and Starz bought out… Sod it, I can't figure it out!

So what should anime fans expect from this? Nothing if it all works out as planned with a seamless transition. This is one of those administrative exercises that makes a bunch of lawyers work overtime drawing up contracts and making lots of money. Manga Entertainment will continue on as before, and we won't notice a thing. Except of course unless the new owners are micro-managers who don't understand the anime business, decide to cut corners to 'economise' and we wind up with dubtitles on all our anime DVDs. Seriously what are the odds of that happening? Oh… right…

MVM have put a whole heap of their series boxsets on sale, and at ridiculously attractive prices, starting from £9.99 onwards, and with many six or seven disc collections going for £19.99. When you can get a show like R.O.D. The TV, or Samurai 7 in their entireties for £19.99 each, you'd be crazy not to take advantage of the opportunity. Go to MVM's online store, Anime On Line to empty your bank accounts. 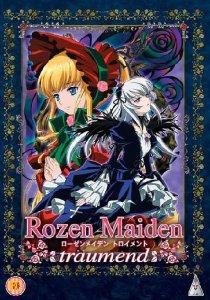 Two reviews for you this week, one old and one new. First up was the review for Rozen Maiden Traumend: Volume 1. If you recall, the first series Rozen Maiden was released in two volumes earlier this year, telling the story of a reclusive teenage boy named Jun, who came into possession of a magically animated doll named Shinku. Shinku and her similarly imbued sisters take part in a battle called the Alice Game, to become the one true Alice, and to finally meet the one that created them, their father. Except the first series was really more about Jun dealing with his reclusive tendencies by becoming the servant of the haughty Shinku, and being verbally and physically abused into sorting his life out. This second series finally turns to the Alice Game itself, and the dolls' destinies. Click the link to read more. 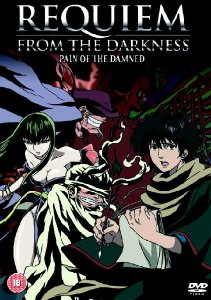 You've probably guessed what's coming up based on past form, and to tell the truth, I've been sort of dreading it myself. I really don't know what to say about Requiem From The Darkness: Volume 3, really I don't. It was bad enough watching and reviewing it, and now I have to introduce the review as well. Click the link and read for yourself of my shock when I found that a series that I didn't think could get any more tedious, actually did get more tedious.
MVM release Rozen Maiden Traumend: Volume 1 today, and it's a delightful series worth seeking out. MVM also released Requiem From The Darkness: Volume 3 some years ago. I may not forgive them for that.