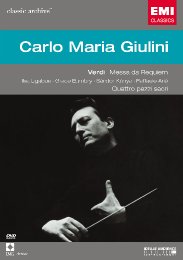 The great Italian conductor, Carlo Maria Giulini, began working with the Philharmonia Orchestra in London during the 1960s, making several highly acclaimed recordings during his tenure.

Two works which were close to his heart, and which he recorded with these forces (albeit with different soloists) were those on this DVD, filmed by the BBC. These are two of the Beeb's finest moments. 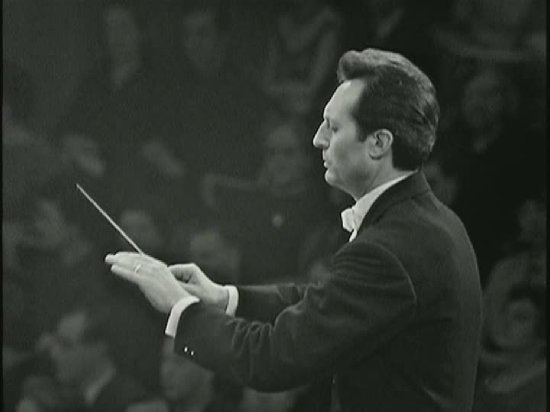 The Requiem, being the larger work, is on first, and there's always going to be a special feeling about a performance when the soloists walk on for their applause before the conductor takes his alone, and he stands in front of everyone, including the soloists. This is someone who obviously wants to be in control over everything that happens.

Here, the solo quartet are some of the best you will come across. All have completely different styles of singing and delivery, but everything blends perfectly.

I enjoyed Raffaele Arié's style the most. He is first of all a communicator, taking one or two brief looks at the score, before lowering it and singing to the audience as if everything he 'said' was the most important thing they were to hear that evening. And what a voice!

Grace Bumbry, the wonderful pioneering black-American mezzo soprano (and who turned 73 last week) takes a conservative London audience by the scruff of the neck and leaves them gasping for more.  The beginning of the 'Lux Aeterna' is where she shines the most, and is just one reason to watch this over and over  again. 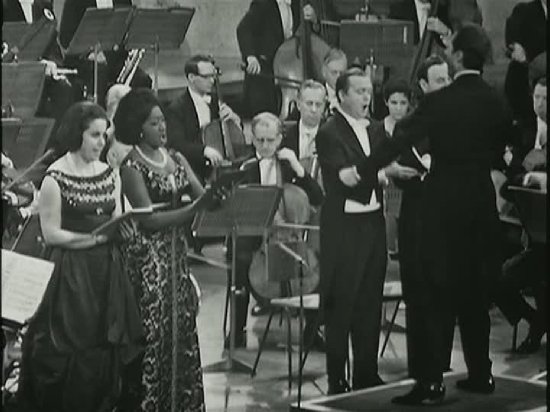 Ilva Ligabue is not the most commanding of sopranos I've heard in this work, and is often taken to the cleaners by Bumbry (in the nicest possible way of course), but her voice is clear, bright and with exactly the right amount of punch for the climaxes. The unaccompanied section within 'Libera me' brings a lump to your throat, which is exactly the feeling you would want.

It's great to see Sándor Kónya live on stage. He was a greatly admired Italianate-Wagnerian tenor, but who only made two commercial recordings. Here, his style and voice are perfect for carrying off Verdi's operatic lines, which I think are far more operatic for the tenor than any of the other soloists.

The choir sing as if their lives depend on it, and it's quite clear they have a great respect for Giulini, who conducts without a score (he probably memorised it by the time he was ten) and doesn't miss an entry, cueing even the smallest thing, making sure whoever performs it feels as if it's rather more important. 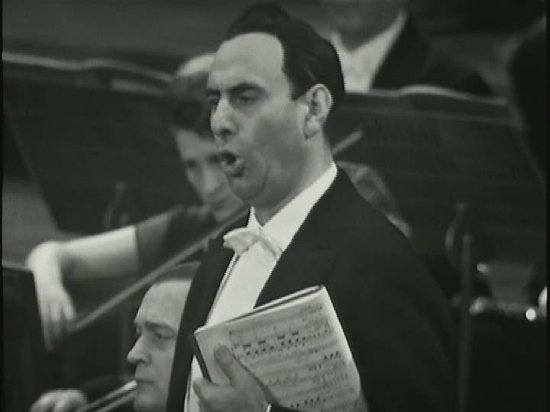 Nothing goes perfectly however, most noticeably at the beginning of the fugue of  the Sanctus, which is taken at a cracking pace, but it's ony a second or so before the choir are  back into the swing of things.

Giulini's overall interpretation is not one which hangs around. The music flows as if every melody is more lovely than the one before it, but it never becomes stuck in the sentimentality that can often appear in this work. There are certainly no prisoners taken for the Dies Irae, which is perfect for the dry acoustic (as it was then) of the Festival Hall. 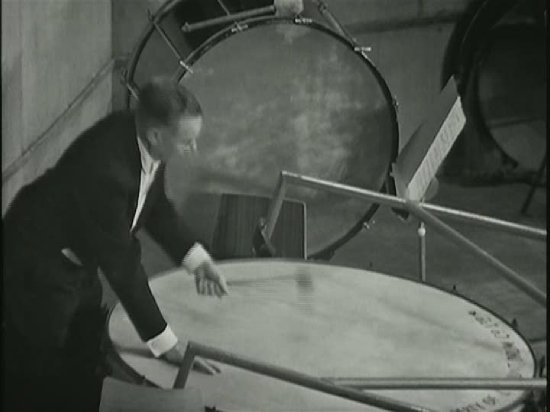 Overall, the orchestra play superbly. There are some things that go a little awry, and which may grate on repeated hearings, such as the split trumpet note at the start of Tuba mirum and the scrappy beginning to the second half when one or two cellos hadn't quite prepared for the frighteningly difficult start to the Offertorio.

These are the only things I noticed though, and when you see and hear the brass at the end of the Sanctus, admire the bass drum being destroyed, and seeing the timpanist continually checking the tuning, everything is forgiven. The orchestra is as committed to this as are everyone else. 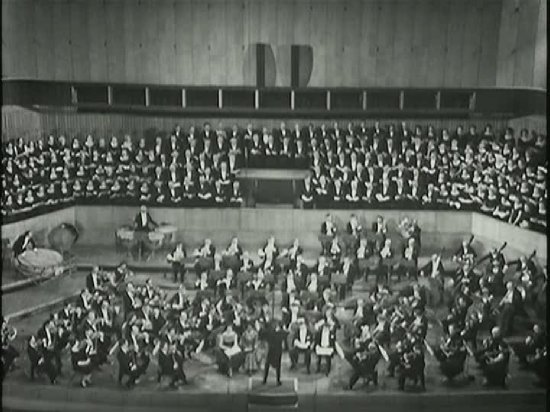 The Four Sacred Pieces, recorded 4 years later (in the Fairfiled Halls) were composed over an 8 year period, and don't necessarily have to be performed together. They all come from Verdi's last 20 years, and contain some of his most peculiar, almost 'experimental' music, notably in the first piece (Ave Maria), which is composed around the 'enigmatic scale'.

The performances are given by the New Philharmonia Orchestra and Chorus. This is exactly the same group of musicians as before (but perhaps with a few more younger mebers of the choir), however one month before the Requiem was filmed, a meeting had taken place to try to prevent Walter Legge (the founder of the orchestra in 1945) disbanding the band.

The orchestra continued until being officially renamed in October 1964, acquiring the rights to the 'Philharmonia' name again in 1977...but this is all by the by. 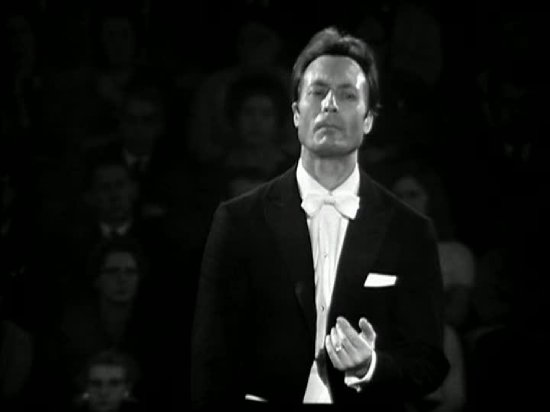 Again, Guilini dispenses with a score. If it's possible, this is the best way to work with a large group of musicians. There is no 'comfort zone' for the conductor, and if he (or indeed she) doesn't know the work well enough, then there are two options. Either the performers will carry on regardless, or the whole thing will fall apart, but when someone such as Guilini is at the helm, there's only one way to do things, and that's to pay attention. This man is sheer class.

There is nothing really in the way of extras, although for some reason, the notes which would normally be supplied in the booklet are now available in .pdf format on the disk itself (perhaps routine for the later release in this series?) This is no good when I'm playing the DVD on my normal setup, and may not be able, or indeed want to print a copy off so I can read it while watching the performances.

Being a TV recording from the 60s, the audio-visual qualities are obviously going to 'suffer' somewhat, but it's always good to have clear, vibrant mono sound (and many of the best classical recordings I've heard are mono). The musical detail is quite incredible, and puts many modern recordings to shame. PIcture-wise, things are not so good, but if you turn the volume up and close your eyes, you will experience something rather special.