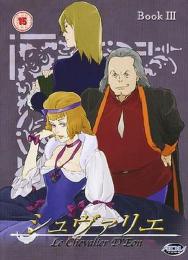 Synopsis:
Created by Tow Ubukata (Pilgrim Jager) and produced by Production I.G. (Otogi Zoshi, Ghost In The Shell), the supernatural anime series Le Chevalier D'Eon is a masterful fictionalization of the real life Charles d'Eon de Beaumont, a diplomat, writer, spy, and Freemason known as one of the best swordsmen in France, whose true gender was a source of speculation well into the late 18th century.

After meeting with the Russian royalty, D'Eon and his comrades find themselves in the Empress' favour. Yet she has partners who want to cut in, cut them out, and cut her throat. And as the tempo of this political waltz speeds, grows darker and more dangerous, grave missteps are made. Secret sorcerers show their true faces. Powerful players make desperate moves. And D'Eon, at last, comes face-to-face with the traitor to his cause and, quite possibly, the one responsible for his sister Lia's demise. The music of madness reaches a crescendo. Join the dance.