DVD
Strip Nude For Your Killer

Though these days, the show may have its critics, you can`t argue the facts of either the success or the longevity of World Wrestling Entertainment`s flagship TV show, Monday Night Raw.

As of this writing (13th March 2008), Raw has aired 772 episodes, but unlike almost all of its fellow shows, it has done so uninterrupted, without season breaks. And while its ratings have fluctuated - in 2008, American TV ratings for Raw are almost half of what they were at their 2001 peak - the show is still seen as extremely important in the key youth demographics.

This four-disc set then, is a look back at the best moments from Raw`s 15 years on television, all the way from 1993 and the show`s modest beginnings at the Manhattan Centre in New York, all the way to 2007`s beginnings of HD production. 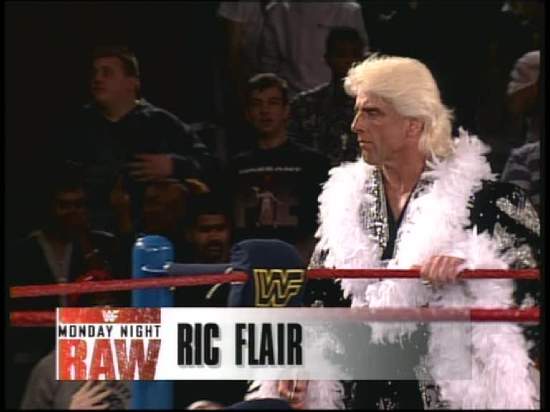 Video is presented in 4:3 fullscreen PAL, and is very good for a DVD of this genre. The archive footage, albeit from only as early as 1993, looks very good indeed, although the late-90s footage doesn`t look quite so pristine. That`s a source issue, however, as this looks just as it did on the original television broadcasts.

Annoyingly, there are censorship issues here, with the WWF "scratch" logo being blurred out, due to legal action from the World Wildlife Fund (also WWF).

As you would expect, the transfer here is very good indeed. There are only minor compression artefacts noticeable, none of which will spoil your enjoyment of this release. 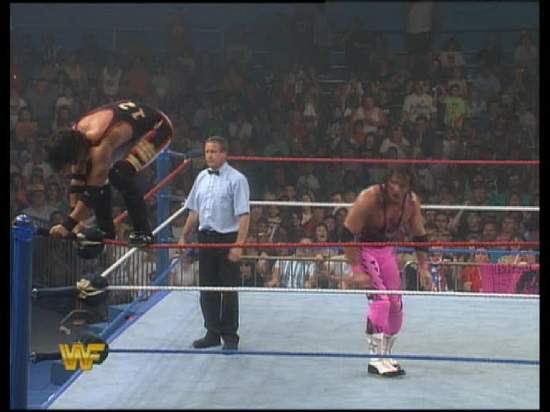 Audio is presented in Dolby Digital 2.0, and is also very good for a DVD of this genre. Everything is well mixed, for a good balance of wrestler entrance music, in-ring action, and commentary.

Censorship issues also reign here, with the phrase "WWF" not allowed to be uttered for legal reasons. In these cases, the "F" is simply silenced.

There are other 2.0 tracks available in German and French. 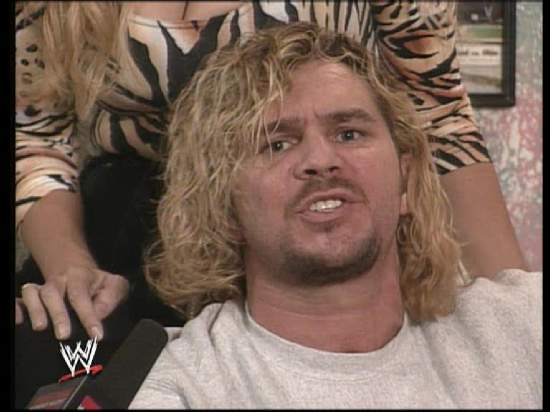 The fourth disc here, which is exclusive to the UK and Walmart in the USA, contains the entire first episode of Raw, aired on 11th January 1993. It`s a fun look back at what wrestling used to be - before the rise of World Championship Wrestling changed TV wrestling forever - although fans who weren`t privy to the show when it originally aired, probably won`t delight too much in the wacky characters of Max Moon and Damien Demento. That said, Shawn Michaels, The Undertaker, and The Steiner Brothers all wrestle, too.

The one thing that`s particularly notable about this inaugural episode of Raw is its pacing. It`s more focused, some would say slower, than today`s product, which is a likely positive if you`re an older fan, and maybe a negative if you`re not.

Overall, though, it`s a nice piece of history to have on DVD. 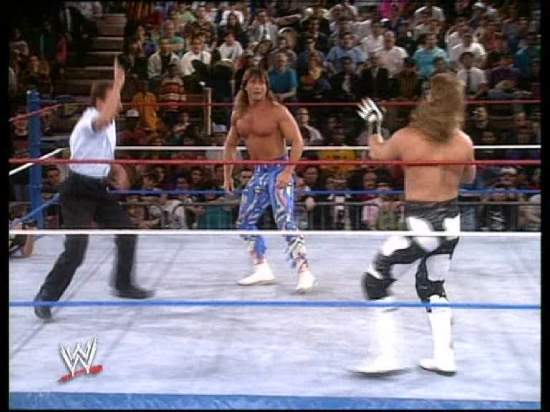 With the main feature of this set lasting almost nine hours, there`s both good and bad available here, although it must be said, the former far outweighs the latter.

Looking at just the matches, to begin, there are some truly superb bouts here, in Ric Flair vs Mr Perfect, Shawn Michaels vs Marty Jannetty, Bret Hart vs 1-2-3 Kid, Owen Hart vs Davey Boy Smith, and Michaels vs Kurt Angle. Sadly, a generous helping of the Flair vs Perfect match is left on the cutting room floor, which is infuriating considering that it was a tremendous bout. Several of the other bouts are clipped, as they were on television for adverts, but in general, this doesn`t ruin them.

Four of these bouts appear on Disc One, but that`s not to say that there are not great moments available there, too. We have the memorable 1-2-3 Kid win over Razor Ramon, the ridiculous but brilliant angle in which Brian Pillman threatened Steve Austin with a gun, and a look at the few weeks in which ECW appeared on Raw. For all of that, be prepared to be embarrassed in recollecting Leslie Nielsen`s "Search for The Undertaker", and William Shatner beating up Jerry "The King" Lawler.

It`s notable that once Disc Two kicks off (beginning 1998), there are far fewer matches here, but many more interviews and skits. Many of these are great - especially if you remember their original airing - particularly all of Steve Austin`s tussles with Vince McMahon, Chris Jericho`s debut promo with The Rock, and Eric Bischoff becoming the General Manager of Raw. Less great are those like the Big Boss Man`s poetry, Stephanie McMahon`s wedding, and the just-too-long "This Is Your Life" with Mankind and The Rock.

Disc Three is a similar story, with some brilliant moments in the Rock concert (which perfectly shows why Dwayne Johnson is too talented to be pigeon-holed as a wrestler), as well as two Shawn Michaels` moments, in which he encounters Edge in a street fight, and returns to the ring in October 2007, in a confrontation with Randy Orton. Although they might have been memorable moments, I was less taken with Edge & Lita`s wedding, and subsequent "live sex celebration".

Throughout the entire main feature, there are some interesting comments from those in the know, about how and why things occurred on the show. Furthermore, there are Pop-Up Video-style comments on-screen, which provide tidbits of information which help to either jog the memory, or inform those who weren`t around for the original broadcast.

If there is negative to be noted, perhaps it is that some of Raw`s notable characters aren`t given the time here that you might expect. Bret Hart`s superb 1997 feud with Steve Austin doesn`t get the credit it deserves, and The Undertaker is largely missing, considering the fact that he has been a WWE stalwart since 1990.


Overall, "The Best of Raw - 15th Anniversary" is a great look back at many of the memorable things that have occurred during the course of the show`s 15 years. The segment and match choices can`t possibly please everyone, but Disc One in particular is tremendous for those who remember that time in wrestling, Disc Two captures the company in their most successful period, and Disc Three brings us relatively up to speed, with the best moments of the last five years.

With the additional fourth disc a further treat, this set comes much recommended.