DVD
Love Goddess of the Cannibals

DVD
The Beast in Space

Love Goddess Of The Cannibals out on DVD in June 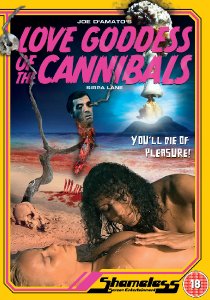 When big business geologists threaten her people and their ancestral lands with their plans to build a nuclear reactor, it's up to Papaya to seduce and then kill those who threaten her ancient way of life.