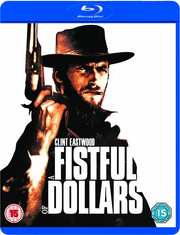 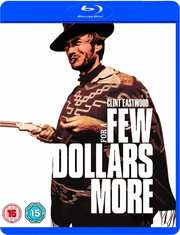 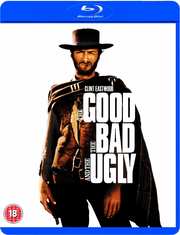 DVD
Fistful of Dollars, A (UK) 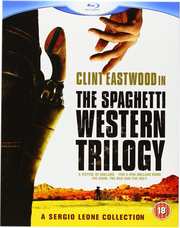 Synopsis:
The Sergio Leone "Spaghetti Westerns" did not simply add a new chapter to the genre... they reinvented it. From his shockingly violent and stylized breakthrough, A Fistful Of Dollars, to the film Quentin Tarantino calls "the best directed movie of all time," The Good, The Bad And The Ugly, Leone's vision did for westerns what talkies did for all movies back in the 1920s: it elevated them to an entirely new art form. Fully restored, presented with their best-ever audio, and including audio commentaries, featurettes and more, these films are much more than just the definitive Leone collection... they are the most ambitious and influential westerns ever made.

A Fistful of Dollars

The first of the "spaghetti westerns", A Fistful Of Dollars became an instant cult hit. It also launched the film careers of Italian Writer-Director Sergio Leone, and a little known American television actor named Clint Eastwood. As the lean, cold-eye cobra-quick gunfighter - Clint became the first of the "anti-heroes". The cynical, enigmatic loner with a clouded past is the same character Eastwood fans have been savouring ever since. A Fistful Of Dollars is the western taken to the extreme - with unremitting violence, gritty realism and tongue-in-cheek humour. Leone's direction is taut and stylish, and the visuals are striking - from the breathtaking panoramas (in Spain) to the extreme close-ups of quivering lips and darting eyes before the shoot-out begins. And all are accented by renowned film composer Ennio Morricone's quirky, haunting score.

For a Few Dollars More

Clint Eastwood had proven so successful in his first foray into European Westerns with A Fistful of Dollars that a follow up sequel was inevitable. Superbly scripted by Luciano Vincenzoni, featuring an unforgettable alliance between ruthless gun-slingers Eastwood and Lee Van Cleef. For a Few Dollars More tells the tale of a ruthless quest to track down the notorious bandit El Indio played by Gian Maria Volonte. The film is also noted for its array of weaponry, a veritable arsenal of rifles that became so operatic and Ennio Morricone's atmospheric score keeps the tension taut as the action moves from Jail breaks and hold-ups to spectacular gun battles.

The Good, The Bad and The Ugly

The third and last western in Clint Eastwood's spaghetti trilogy. Director Sergio Leone substitutes for the upright puritan Protestant ethos, so familiar in Hollywood westerns, a seedy cynical standpoint towards death and mortality, as a team of brutal bandits battle to unearth a fortune buried beneath an unmarked grave. Joining Clint, clearly "The Good", is the irredeemably "Bad" Lee and the resolutely "Ugly" Eli Wallach. The complete plot of bloodshed and betrayal winds its way through the American Civil War, filmed to resemble the French battlefields of World War One, to end in the climatic Dance Of Death. Arguably the quintessential Italian Western, this 1966 film boasts a fine Ennio Morricone score featuring a main theme that reached No. 1 in the world's pop charts.

Special Features:
A Fistful of Dollars:

A New Kind of Hero
A few weeks in Spain: Clint Eastwood on the experience of making the film
Tre Voci: A Fistful of Dollars
Not ready for Prime Time
The Network Prologue
Location Comparisons
Radio Spots
Trailer

For A Few Dollars More:

The Good, The Bad and the Ugly: