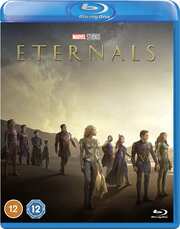 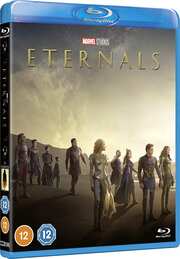 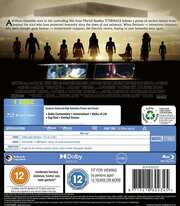 Blu-ray
Doctor Strange in the Multiverse of Madness
Related Articles

I’ve said it before, but I’m not the greatest Marvel aficionado out there, and to be honest, most of my experiences with the comic book characters have come from the MCU movies and some of the spin-offs. When it comes to my childhood, I got about as far as Spider-man, The Hulk and The X-Men. Most of the other characters were new to me when I started watching these films. But there comes a point where a person might start wondering if Marvel are running out of characters to adapt, and just how many comic book properties they have to begin with. I read the blurb of Eternals, and at first glance it felt like a cross between Von Daniken’s ancient astronauts, and one of those original series Star Trek episodes where they wind up meeting an ancient God, like that one with Apollo and his green space-hand.

Seven thousand years ago, the Celestials sent the Eternals to Earth to protect humanity from the scourge of the Deviants. Their mission was strictly defined though, eliminate the warped beasts only, and avoid interfering with the natural development of humanity. Still, they came to be worshiped as gods, entering mythology, and might have nudged progress here or there, but otherwise they blended into the background, inclined to stay undercover until the day the Deviants returned.

And now they have indeed returned, with powers and abilities never before seen, taxing even the strongest of the Eternals. Scattered across the world, the Eternals will have to reunite and come up with a new plan, but before they can even start, they have to deal with a tragic loss. And finding out the true nature of their mission sows the seeds of conflict between them.

Eternals gets a 2.39:1 widescreen 1080p transfer with DTS-HD MA 7.1 Surround English, DD 2.0 Stereo English Audio Descriptive, and Dolby Digital Plus 7.1 Surround French and German, with subtitles in these languages and Danish, Dutch, Finnish, Norwegian and Swedish. The image is clear and sharp, with the slightly subdued colour palette that I’ve come to associate with most of the Marvel movies, giving their comic book style a realistic feel. No issues with the image quality, and none with the audio either, with a nice, action packed, and immersive soundtrack. The dialogue isn’t the clearest, and I did have to skip back on occasion for some subtitles to cut through the mumbles. And I also realised early on that I am tiring of CGI in these films. A rubber band CGI Angelina Jolie kicking CGI critter ass might as well be a cartoon. And I wasn’t expecting a Bollywood number...

You get one disc in a BD Amaray style case, and the one I got still had the o-card slipcover. They obviously haven’t sold out, and I think they might take their time doing so. The disc boots to an animated menu, and there are the following extras.

You might remember an episode of Doctor Who, where the moon hatched into a giant space lizard, which laid an egg that took the place of the original moon. It wasn’t very well received at all. Marvel only went and took that plot for the Eternals movie. I thought Thor: The Dark World was the worst of the MCU, but Eternals trumps that by quite some margin. It’s really not that good at all. It’s overlong, with a ridiculous story, and doesn’t really do much with its characters. Certainly none of the characters had the kind of charisma or screen presence of a Thor or Captain America. There are too many of them to begin with, ten of them to try and invest in, ten character arcs that work to varying degrees of success. But when the main characters in the story, Sersi and Ikaris, whose love story down the millennia is supposed to be the backbone of the movie, don’t light up the screen, then it begins to feel like a film by the numbers.

I know that these comic book movies don’t deserve the expending of brains cells, but there are choices made in the story that only cause consternation, and serve to distract from the already weak narrative. Early on, they address the point as to why the Eternals didn’t join the battle against Thanos, explaining that their mission was too strictly defined. But once you raise the issue, you’re only left wondering why by the end of the film, when the world is about to end, only the Eternals are there to deal with it? Were the Avengers taking the day off? Also, a superhero shouldn’t just be comic relief, but that is what Kingo is in this film. He shows up, fires off a few energy blasts at some Deviants, has a lot of comic byplay with his side-kick, but when it comes down to brass tacks, he decides not to be involved, and leaves the climactic action scene to everyone else.

Not that I really care about spoiling this film, but fair warning... The whole Maguffin of the film is a giant Celestial gestating at the heart of the planet about to hatch, and we’re given the impression that it’s so big that the planet will be reduced to rubble in the process. But once again, Hollywood shows that its sense of scale gets out of whack once it reaches planetary proportions. I had a whinge about the second Independence Day movie on just this nerdy topic, and Eternals does the same thing, as when the Celestial is revealed, gargantuan though it is on the human scale, in comparison to the planet that it’s hatching from, it’s barely a pimple. And the whole Deviant evolution subplot is effectively squandered as a red herring.

Eternals is the worst of the MCU, and it doesn’t bode too well for the upcoming Phases, when you think that these new characters are going to bear the weight of the story, the way Hulk, Thor, Iron Man, Captain America and the others did for the Infinity Stones saga. There are moments in the film that might grab the attention, but overall a weak and ludicrous story with insipid characters, makes Eternals eternally forgettable.