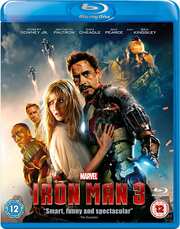 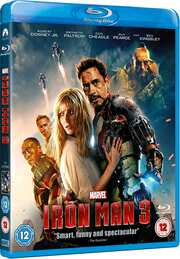 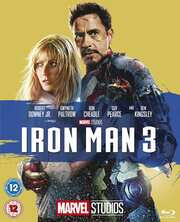 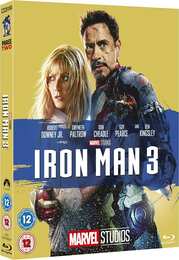 As I write, we’ve just had the San Diego Comicon, and Marvel have been busy, announcing films and TV series, and setting forth the direction of the Marvel Cinematic Universe to come. If you thought that Endgame was a mega-event full-stop to the franchise, with what follows merely an epilogue, then you thought wrong, as Marvel have a long term game plan in effect. We’re currently in Phase 4 of the film series, and they’ve now announced films that will take us through Phases 5 and 6. Yet when it comes to filling in the gaps in my collection, I’m only just starting out on Phase 2, with the third Iron Man film, imaginatively titled Iron Man 3. But there is something worth noting about this film, in that it’s a superhero film where the directorial reins were handed to Shane Black, creator of Lethal Weapon and better known for comedy action thrillers set in the ‘real’ world.

Following the events of Avengers Assemble, the battle of New York, where Tony Stark helped save the world by throwing a nuclear bomb through an interstellar portal, he’s been dealing with the trauma of that event by throwing himself into his work, his ‘duties’ as Iron Man, and creating more and better powered suits. But Tony Stark’s past is about to bite back in an ominous way; an innocuous night back in 1999 in Switzerland, where he blew off a meeting with an odious looking geek with a tech start-up, in favour of a one-night stand with a bio-geneticist with an interesting theory on cellular regeneration.

Even putting superheroes and aliens aside, the world is pretty dangerous today, with a terrorist known as the Mandarin attacking US assets around the world, and taunting the nation, and the president in particular with his pirate TV broadcasts. And the odious geek, Aldrich Killian, has transformed himself into quite a hunk, is trying to make a deal with Stark Industries again, and he’s putting the moves on Pepper Potts.

Iron Man 3 gets a 2.40:1 widescreen 1080p transfer with DTS-HD MA 7.1 Surround English, DTS-HD HR 5.1 Surround French, Dolby Digital 5.1 Surround Flemish and Russian, and DD 2.0 Stereo English Audio Descriptive, with subtitles in English, French, Russian, Arabic, Bulgarian, Dutch, Estonian, Greek, Latvian, Lithuanian, and Ukrainian. It’s another impeccable transfer, clear and sharp, rich colours, and excellent detail. It’s a big budget Marvel movie to be sure, but a surprising number of action sequences and stunts are accomplished practically. The kind of egregious CGI of Avengers Assemble is absent here. The audio too is impossible to fault, bombastic and immersive, perfect for an action film, while keeping the dialogue audible throughout.

You get one disc in a BD Amaray style case, which after previews for Thor: The Dark World, The Iron Man & Hulk animated movie, Lego Marvel Superheroes and The Lone Ranger boots to an animated menu.

On the disc you’ll find the following extras...

So Shane Black gets the keys to a superhero franchise... and he goes and makes a comedy action thriller. And surprisingly, this is as good as Iron Man gets. Giving a well-worn genre a change-up like this makes it feel fresh and original, and given Tony Stark is Marvel’s Batman, a normal human being motivated by higher concerns, and funded by personal wealth, powered by high technology, it makes the character feel right at home in this genre, especially given the way the story develops, effectively stripping Tony Stark of his tech and his wealth, leaving him just his smarts and quick wits to survive.

The Tony Stark character is perfect to begin with for this particular genre, but giving him the aftermath of the previous film to deal with, a degree of PTSD, makes him the kind of broken hero that you usually get in these films, having to work through his issues as well as dealing with the bad guys. The villains too are nice and human, down to earth and abrupt with their brutality, despite some genetically enhanced super abilities. Their motivations are simple greed and revenge; once again more action thriller than comic book.

Shane Black also references the first two Lethal Weapon films like crazy here. There’s an action sequence in a Christmas tree lot, and a helicopter attack on a cliff-top mansion as in the first Lethal, and said mansion comes crashing down the cliff, and the film’s denouement takes place aboard a container ship (there’s even a Maersk container crashing down at one point) as in the second Lethal Weapon. There are plenty of moments of glee if you’re a fan of eighties and nineties action cinema.

This is as good as Iron Man gets for me, which given that I don’t really have an affinity for this character is saying something. The genre switch is perfectly judged, the action is visceral, the characters are grounded in realism, indeed, this is about as grounded a superhero film as you can imagine. The film’s sense of humour is spot on, and the pacing works brilliantly, making a 2 hour plus film feel significantly brisk. The story is well constructed, with more than a few twists along the way, and ultimately is very satisfying. And as usual, with a modern film on Blu-ray, I have nothing to complain about when it comes to the technical aspects of the disc.