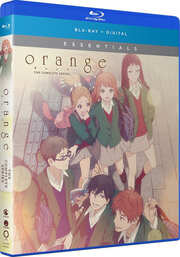 Review for Orange: The Complete Series

Celebrity interviews are weightless fluff at the best of times, and usually the conveyer belt of press junkets tend towards utter vapidity. Interviewers tend to have a set arsenal of lightweight, inoffensive questions, and your eyes may glaze over. One of those questions, which I have seen shot indiscriminately at countless famous and semi-famous people is “If you could give your younger self a piece of advice, what would it be?” A totally pointless question, which won’t challenge the interviewee, but might evoke a modicum of attention from your semi-comatose audience; it’s the kind of question an HR department psychology graduate will come up with to annoy job applicants. But what if that question actually had meaning? What if there was actually a way to communicate with your younger self? That is the premise behind Orange, a teen drama that I imported from Funimation US. It’s another one of those shows that will probably never get a UK release... 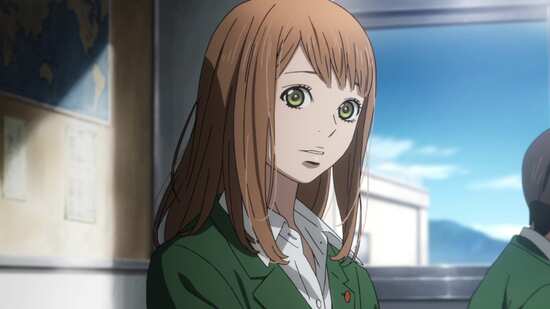 Getting a letter from your past self can be an illuminating experience, as five friends in their twenties find out, when they uncover a time capsule they buried when they were in high school. Most telling is the absence of the sixth member of the group. But then the reverse happens. High school student Naho Takamiya gets a strange letter one morning, a thick sheaf of regrets from her future self. It would be easy to dismiss as a prank, only it accurately predicts what happens to her that morning, including the arrival of a new transfer student from Tokyo, Kakeru Naruse. And it’s with regards to Kakeru that Naho’s future self has the most regrets. He joins her group of friends, and seems to be fitting in well, but her future self tells that Kakeru’s future will be tragic. The letter is also a guide to changing that future, and fortunately Naho has her friends to help.

13 episodes of Orange are presented across two Blu-rays from Funimation in a 9-4 distribution. Note that the final episode is double length.

Orange gets a 1.78:1 widescreen 1080p transfer on these discs. The image is clear and sharp, detail levels are good, and colours are consistent. The animation is smooth and detailed, and there are no issues with visible compression, aliasing or the like. I didn’t notice much in the way of digital banding either, except in darker, night-time scenes. Orange is a story which looks to be aimed at the shojo demographic, those titles aimed at female audiences. Certainly the character designs have that aspect to them, while the colour choices are gentler, almost pastel. It’s a good looking show, presented well on Blu-ray. 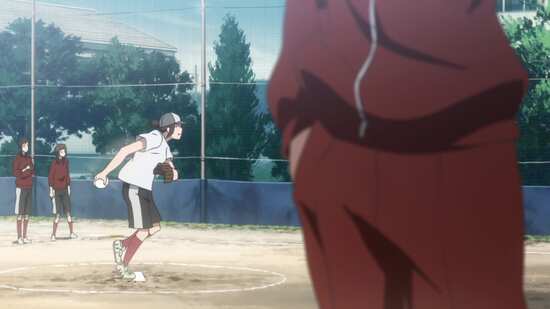 You have the choice between Dolby TrueHD 5.1 Surround English and 2.0 Stereo Japanese with translated subtitles and signs locked during playback. I stuck with the Japanese audio throughout, and was happy enough with the experience. The actors are suited to their roles, and deliver performances that match the melodrama of the story, suitably emotionally effective. The music is what you would expect with this genre, plenty of power ballad hitting theme songs, while the incidentally music is effective enough. The subtitles are accurately timed and are free of typos. 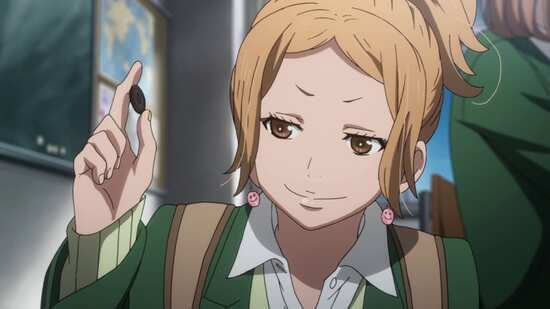 You get two discs in a thin BD Amaray style case. The sleeve is reversible and you also get a digital code. The discs boot to animated menus. 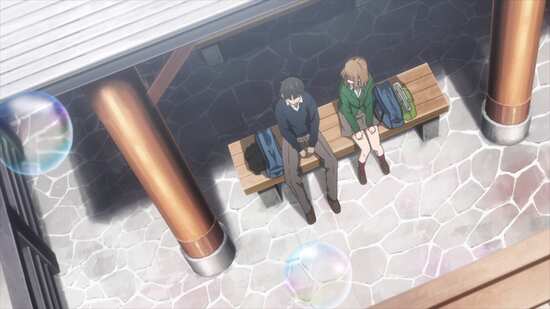 Disc 2 autoplays a trailer for In Search of the Lost Future.

Here you will find 3:52 of Promo Videos for the show, the textless opening and three textless closings, and trailers for the original Fruits Basket, Gosick Part 2, Ultimate Otaku Teacher Part 2, and Your Name. 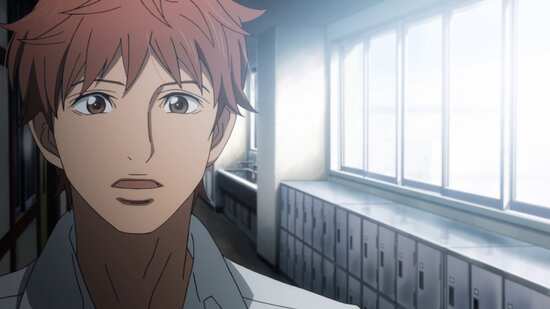 Orange is a really effective and well done light drama, which takes the viewer on an emotional ride, with plenty of ups and downs, and a suitably cathartic conclusion. It has just one real problem. Anohana told a very similar story, and ultimately did it much better. The problem with Orange is that the Maguffin adds a layer of complexity to its story that works against the emotion of the piece. It’s a comparative problem, and certainly not worth avoiding the show over. It’s just that comparisons are bound to be made. 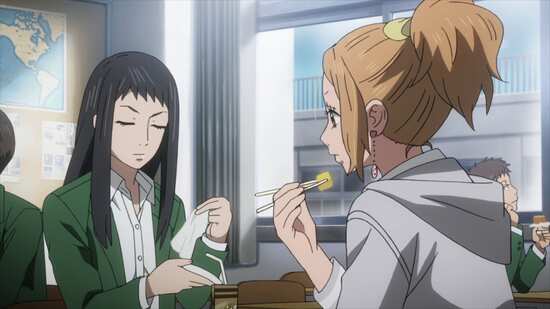 Both shows are about regret, and about loss, with groups of friends dealing with the loss of one of their number, years after the fact. In Anohana, five friends had drifted apart, and it took the return of their dead friend in ghostly form to finally start the healing process. In Orange, it becomes about changing the past with the aid of a form of time travel, when a girl gets a letter from her future self, warning that a new transfer student will join her group of friends, but will commit suicide soon after. The letter goes on to list all the regrets that she wants her younger self to address. The thing is that Orange has two perspectives, the high school story interleaved with scenes of the five surviving friends, ten years in the future, discussing their missing friend, and what caused him to kill himself. 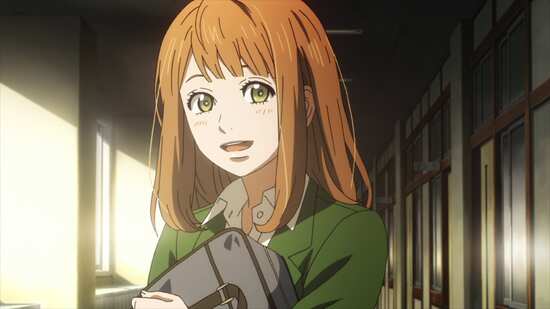 The future scenes are useful in establishing the regret that the five surviving friends feel, and also as they investigate what their lost friend was going through, we learn more of what caused his depression. It also follows them as they decide to try to do something about it, which introduces some distracting technobabble as they figure out the mechanics of sending a letter to the past. And also because we get to know the future friends, and learn of their interrelationships that have developed in the ten years since high school, it introduces ambiguity, and questions of the ethics of changing the past. You start wondering whether they are right to effectively sacrifice their lives to change history, and this serves as a distraction from the main thrust of the story, and also means that episode runtime has to be spent on time-travel logic to resolve the debate for the audience, time which could have been better spent on the high school story. It might have been better if Naho just had the letter from the future to act on, with no reference to the future beyond the opening scene. 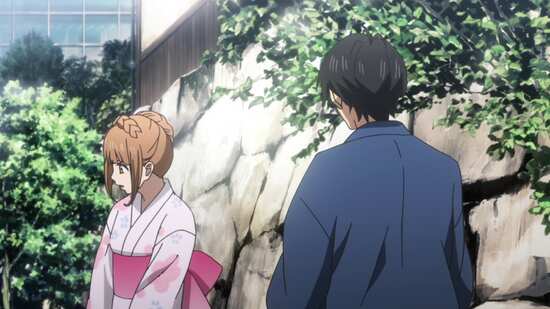 That is really where the heart of the story is, with Naho receiving a letter full of regrets from her older self, warning that the new transfer student Kakeru suffers from a depression that will ultimately lead to his death, and that she is to change the things that she originally did, that she believes exacerbated his depression. Of course no one would take a letter like that at face value, which makes it all the more unfortunate that the first regret that she chooses to ignore, concerns the event that causes Kakeru’s depression to begin with. Subsequently she follows the letter’s advice to become closer to Kakeru, made harder by her typical teenage awkwardness. But slowly, as they become friends, and as the school year passes, they become closer, changing the future as predicted by the letter, but consequently making it harder to predict what will actually happen, as it seems that becoming friends with Kakeru does nothing to deal with his underlying depression. It seems that the future will still come to pass, just not in the same way as described by the letter. 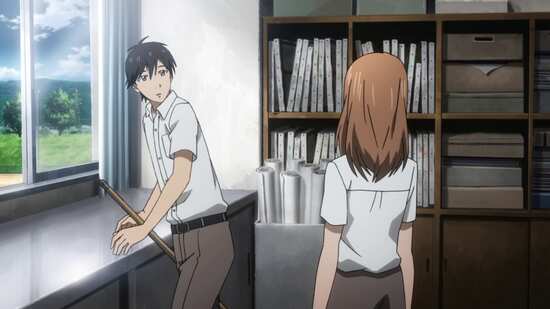 Fortunately she has her group of friends to rely on, even if she can’t tell them of this unbelievable letter from the future, as they all embrace Kakeru as one of the group. Suwa is a gentle giant who persuades Kakeru to join the soccer club, and the first complication is that he’s sweet on Naho, but the letter tells Naho that she’s supposed to date Kakeru. Not that it matters as an upperclassman named Rio has her eyes on Kakeru, threatening to derail the whole thing. Takako is an outspoken girl, and Azusa is a cute bundle of energy that both support Naho however. Hagita is the final member of the group and he has a quirky personality that belies an inner warmth. He and Azusa always deny any interest in each other, which ensures that they are destined for each other. 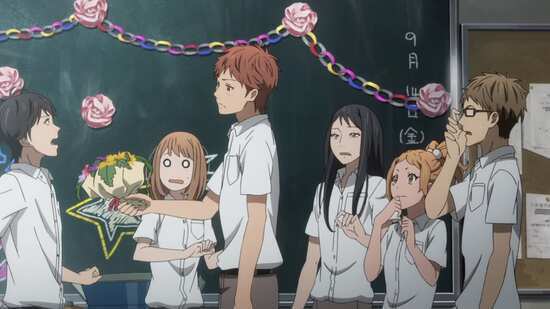 Orange is a good show, even if its tale of regret and atonement through time travel can let its contrived nature interfere with its emotional impact. On top of that, it presents a story with the delicate grief and poetic anguish that bears little resemblance to reality, but is guaranteed to touch the hearts of the audience demographic. And in the end, Orange pulled all the right strings in my heart as well. I was also tickled by the physics teacher character that showed up to exposition out the rules of time travel in this world, as he bears no small resemblance to mad scientist Okabe “Okarin” Rintaro from Steins;Gate, the definitive time travel anime. The Blu-ray presents the show to good effect, and given that it’s Region B compatible, there’s no reason why you shouldn’t import a copy.