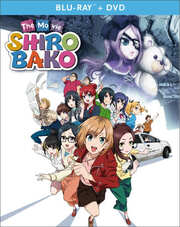 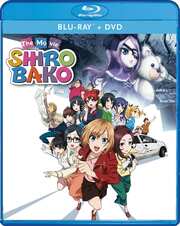 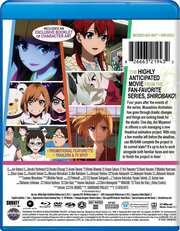 Review for Shirobako The Movie

A few years ago, when I was in the middle of reviewing the Shirobako series, my collector’s mania was triggered by the announcement of a feature film spin-off. That was back in 2018, and the film finally was released in 2020. Back then I hoped that just like the TV series, it would get a Region B compatible Blu-ray release. Alas, Sentai didn’t get the rights to the feature film to complement their series release, and in the end, it fell to Shout Factory in the US to release it. And they locked it to Region A, although thankfully, given that there’s no sign that Shirobako will ever get a UK release, Shout Factory unlike dedicated anime distributors, still releases content on DVD, and I can at least play Region 1 discs through my TV. The screencaps in this review are taken from the Blu-ray, but I just can’t watch movies on a laptop screen. 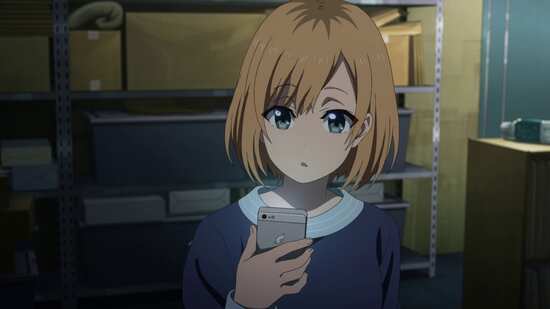 Shirobako is a story about the process of anime creation, following its characters at work in an anime production studio. The 24 episode TV series was all about how TV anime is produced. When the movie was announced, I facetiously opined that the movie would be about the making of an anime movie. It turns out not to be as facetious a comment as I first thought. 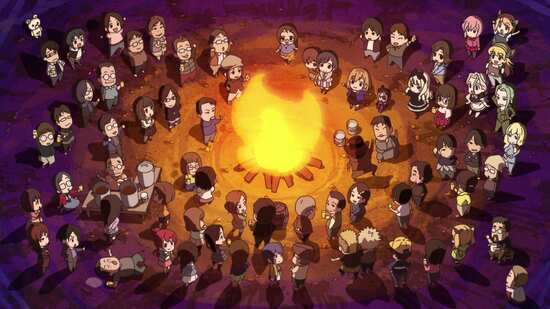 In high school, five girls worked together to create an anime film to show at the school culture festival. Aoi Miyamori, Ema Yasuhara, Shizuka Sakaki, Midori Imai, and Misa Todo together made a vow to work together on an anime feature film. Two and half years later, only Aoi and Ema had managed to get their foot in the door of a struggling animation studio, Musashino Studios a.k.a. Musani, and they were finding that doing something you love for the joy of it, isn’t the same as doing something for a career. It took some effort, and a lot of hard work and dedication, but eventually all five girls got the chance to live out their respective dreams of making anime, and in the process rehabilitated Musani as well. 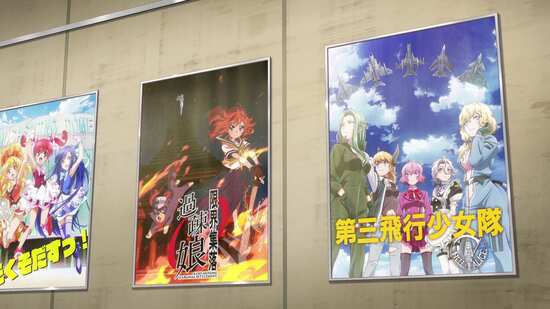 That was four years ago, and things didn’t work out too well. A poor production deal ruined the reputation of Musani, and most of the staff went their separate ways to other companies. Aoi Miyamori is the last of the friends working there, and her heart isn’t in it anymore, not in a company left doing outsourcing work for other studios. But then a chance arises to put Musani back on the map once more if they make a feature film. The problem is that they have just nine months to make a feature film from the ground up, a process that normally takes two years, and they don’t have a choice as to what movie to make. They’ll be picking up a project dropped by another studio, and the trailers have already been released. Aoi will have to get the Musani team back together again, but first she’ll have to rediscover why she loved anime to begin with.

This release from Shout Factory is a BD/DVD combo, and for the purposes of this review, I watched the DVD. 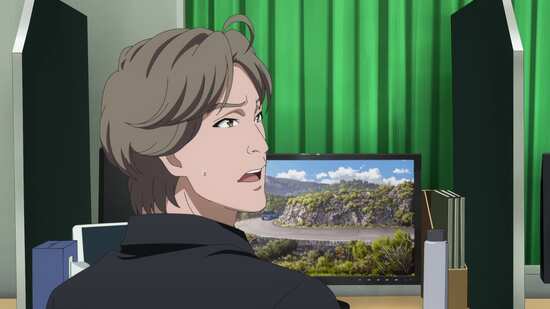 On the DVD, you get a 1.78:1 anamorphic widescreen NTSC transfer. It’s progressively encoded for 24fps playback on compatible devices, but the line detail gains a degree of shimmer and moiré alongside the smoother playback that might be off putting. The 60Hz playback might not be as smooth but I found the better detail preferable. The image is clear and sharp otherwise, free of significant compression and with consistent colours, although banding is prevalent. Naturally I wish I had a Region A Blu-ray player at this point. If you’ve seen the TV series, you’ll find the character designs familiar, while the settings and the quality of the animation has an uptick for the theatrical presentation. PA Works tend to produce high quality animation to begin with, so the leap from TV to feature film isn’t quite as pronounced as for lesser TV shows, but that’s just a complement to PA Works rather than a criticism of the film. 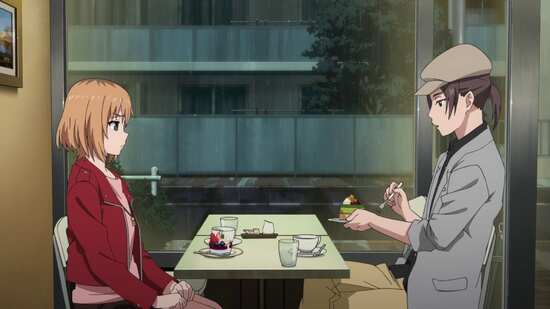 You have the choice between Dolby Digital 5.1 Surround and 2.0 Stereo Japanese, with optional English subtitles. Just like the TV series, there is no English dub for the film. The audio is immersive, a nice expression of surround design in a film which is ostensibly a drama, light on action. The dialogue is clear, and other than a couple of early typos with Miyamoto’s name early on, the subtitles are accurately timed and legible throughout. The songs also make an impact as well. Yes... songs. 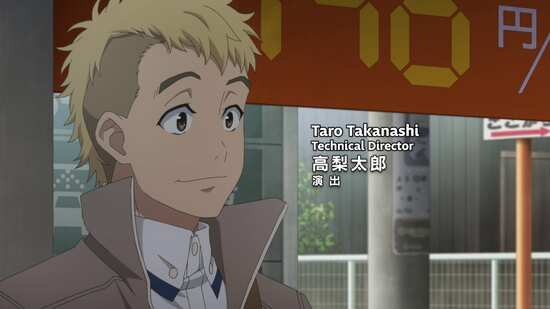 You get two discs on each inner face of a thin BD Amaray style case. There is an o-card slipcover and the sleeve is reversible. There is one sheet of paper, folded in half with characters from the film presented on three pages, setting art on one. The case lists this as a booklet. 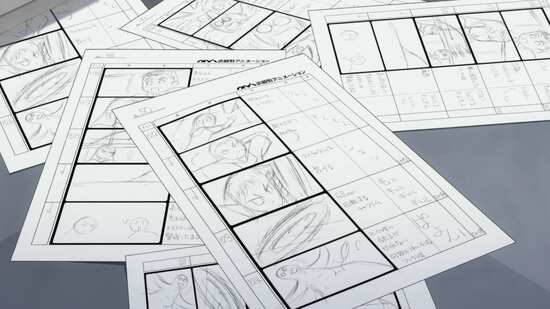 The DVD (and the BD) boots to static menus, and the extras are common to both discs. 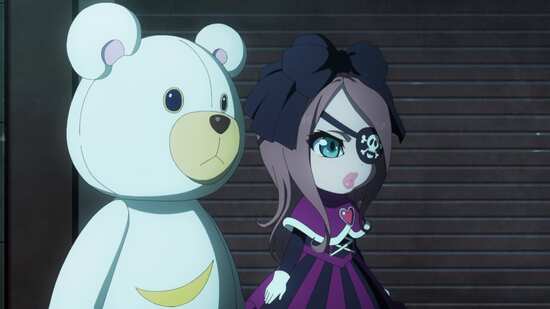 Shirobako the Movie is manna for fans of the show, a chance to see these quirky characters once more, and experience their particular world of work. I loved the film and had a great time watching it. I got drawn into the characters and their particular travails. As a fan, I am very happy. But taking a step back from my fervour for the franchise, I have to say that this is a wholly unnecessary film. It adds nothing to the story or the characters, and really just recycles the TV storyline, making it about a creating a feature film instead of a TV series. A space of four years separates the TV series from the movie, and the characters haven’t changed, not their hairstyles, and not their life circumstances (except where the story demands). 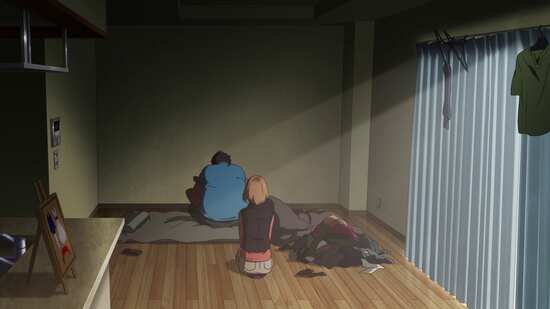 At the start of the TV series, Musani was in the doldrums, and the characters had to come together to rebuild its fortunes, and in the process take a fair few steps towards achieving their dreams. As the movie begins, Musani is back in the doldrums, actually worse off than it was at the start of TV series, and while the characters each have four years of experience in their respective fields (Aoi’s the company’s main production supervisor now), they’re all facing a degree of disillusionment and really all need to be reminded of why they wanted to work in anime to begin with. 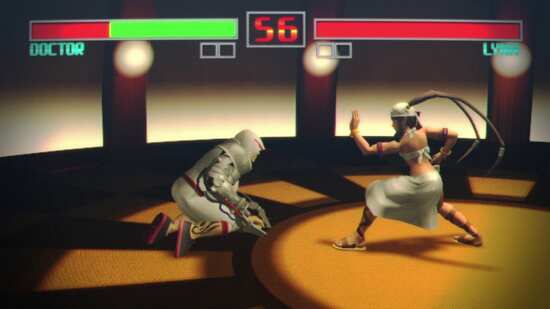 Musani gets the chance to work on a feature film, a chance to claw back its reputation, and the film follows the characters as the reunite the band, all pitch in to make this feature film a reality, go above and beyond to make it stand out. Naturally there are impediments along the way, personality conflicts to resolve, and external brickbats to dodge. If you’ve seen the TV series, you know exactly what to expect. 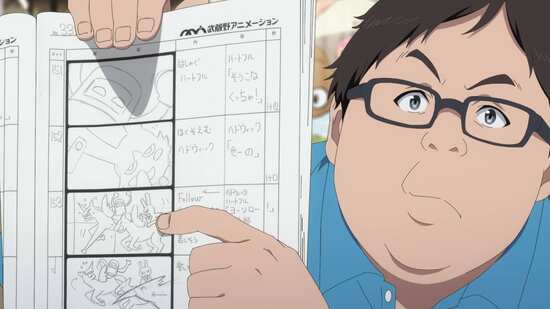 And Shirobako the Movie will defy your expectations in the unlikeliest of ways. For the first half hour, I was sitting there, enjoying the experience, but getting a satisfied complacent feeling as I reacquainted myself with the show’s characters, and the familiar problems they faced. But then there’s Aoi’s sense of ambivalence about her job, and her search for motivation. There’s a greater degree of melancholy to the character in the movie, until her mascot characters appear, Roro the bear and Mimuji the Viking Pirate girl, and the three sing a song. Yes, Shirobako the Movie is a musical. It’s not packed with songs, but it’s such a jarring change from the TV series that all of a sudden I was at the edge of my seat, paying attention to every frame of the film. It’s really well done too, catchy tunes with wonderfully choreographed animation. 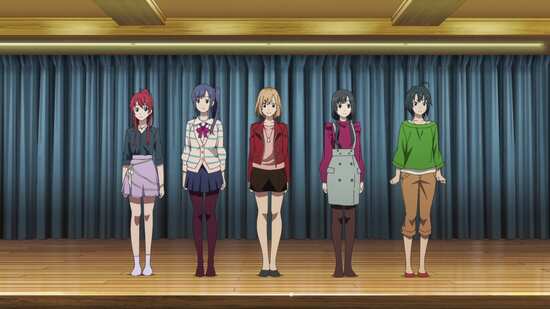 Shirobako the Movie contrives to tell much the same story as the series once more, and despite a 4 year time skip, these characters don’t feel four years older. In any lesser anime, this would be a detriment, but Shirobako is so good, the characters so engaging and easy to invest in, that the movie is just a delight, another chance to visit this world. And in the end, the movie adds just enough that is new and different to justify its existence. It’s still a franchise that I wish a UK company would get behind, as it demands a local release.