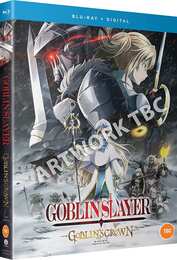 If you’re one of those people that get triggered by spine mismatch, you may be in luck this month... kind of. In 2019, the first Goblin Slayer series came as quite the surprise, what seemed on the surface like another RPG style anime, turned out to be a very satisfying, character focused dungeons and dragons anime show. But in 2019, it was released by Manga Entertainment. The feature film spin-off now comes to us in the UK from Manga Entertainment’s new owner, Funimation. But if you’re going to get all OCD over a Manga logo next to a Funimation logo, the Goblin Slayer series has just had a re-release with a Zavvi exclusive steelbook from Funimation UK. Now you’ll just be triggered by an o-card wrapped Amaray style case next to a steelbook. But the logos are the same now. 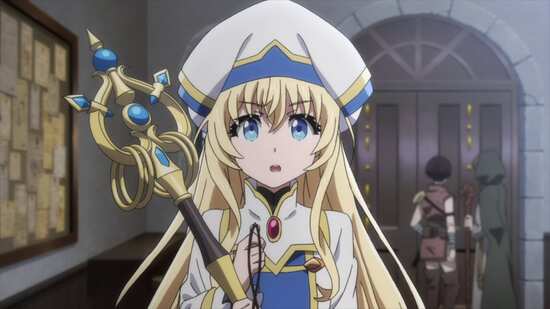 When a newly qualified Priestess adventurer, with a lowest ranked porcelain class tag around her neck walks into a guild looking for a quest, she’s quickly recruited by three others looking to make a quick mark by wiping out a nest of goblins. Goblins are the lowest of the low, the weakest enemies, and an easy way to pick up a reputation and experience. Except that goblins are wily, cunning, evil and smart, and with her new found allies dead, injured or worse, the Priestess’ career as an adventurer looks to be a short and fruitless one.

That’s when the Goblin Slayer walks into the cave. This armoured man has a silver ranked tag, the highest rank for an active adventurer, but he’s earned his name and reputation by his single minded mission to slaughter all goblins, and he has the experience and ability to deal with these vermin. Even still, he’s looked down upon by other adventurers as incapable and unwilling to deal with a real challenge, and his rank and attainments are constantly questioned. But when he rescues the Priestess, he gets a new follower on his adventures. 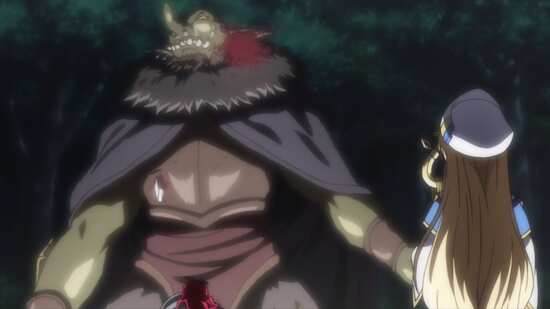 The film begins with a recap of the series, detailing how the Priestess first met the Goblin Slayer, and the adventures that ensued. It gets you caught up with the meat and bones of the story before moving on to the main arc detailed in the film. Goblin Slayer gets a new mission from the Sword Maiden, to find and rescue a party of adventurers who took on a mission to deal with a nest of goblins, and who have gone missing. Led by a noble, her family are particularly insistent on having her returned. The trail leads north, further north than they usually go, and alongside High Elf Archer, Lizard Priest and Dwarf Shaman, Priestess and Goblin Slayer find a goblin threat unlike any they have seen before, one which will tax their skills and stamina. 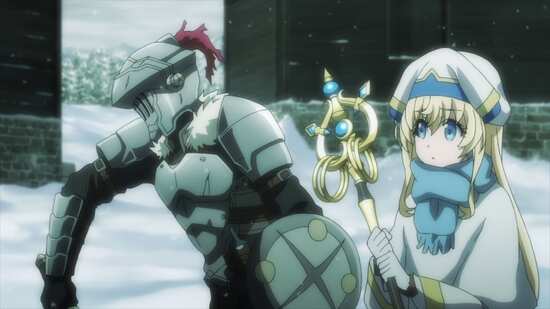 The 1.78:1 widescreen 1080p transfer is clear and sharp, detail levels are good, and the animation comes across well. The creators had to find a balance between moody horror and clarity, and they may have opted to lean towards clarity a little too much. It takes the edge of the creepy tone of the story. One bit of unnecessary cheapness is the cut and paste on this world’s moons, which both have the exact same craters. It’s one of those trivial niggles that you can’t un-see once you’ve noticed it. But the rest of the world design is strong; the character designs are appealing when needed, hideous when it comes to the goblins. It’s a very watchable film that ups the production values as you would expect from a feature film spin-off. That’s very noticeable when you have the series recap to compare with before the new story starts. 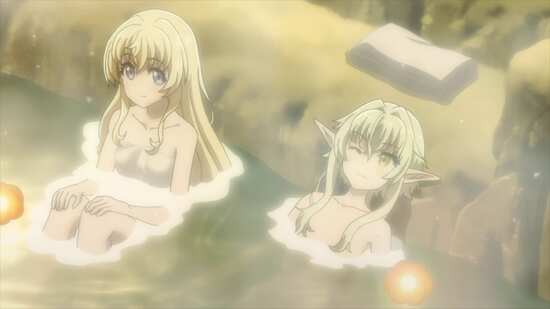 Goblin Slayer offers you the choice between Dolby TrueHD 5.1 Surround English and 2.0 Stereo Japanese with subtitles and signs this time unlocked during playback. The audio is fine, without issue on these discs. The actors are suited to their roles, and the action and music comes across well in the Japanese stereo that I watched. The subtitles are timed accurately and are free of typographical error. It’s a little odd to hear a feature film without a 5.1 Surround Japanese track, but the stereo is on a par with the TV series, with plenty of action to partake of. 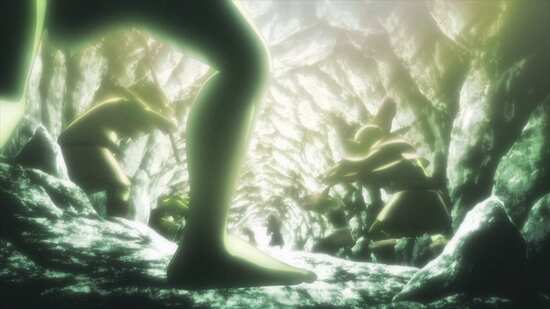 You get one disc in BD Amaray style case, wrapped in an o-card slipcover. The inner sleeve offers artwork as well. There is a digital code to use and the disc boots to an animated menu after playing a trailer for Attack on Titan: Final Season.

The sole extras on the disc are three Promo Videos running to 4:35 in total. 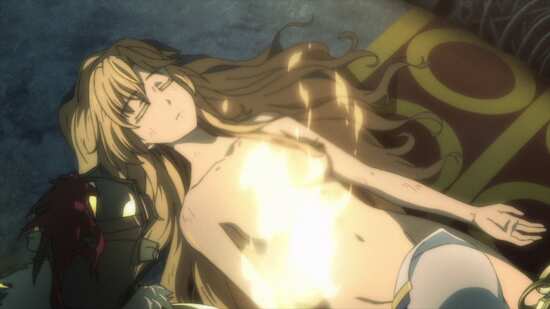 This is just what the doctor ordered if you’ve been hankering for more Goblin Slayer action, since the series was released two years ago. With a second series on the way, this film will do much to fill that void, although you might be left with an unsettling feeling that maybe more Goblin Slayer isn’t what the world needs. That first series was a breath of fresh air, departing from the usual ‘isekai’ lost-in-another-world tropes, and also offering more than just the usual RPG clichés. And the film gives you more of the same, which is very much a good thing. And at the same time, it might be considered a detriment too. 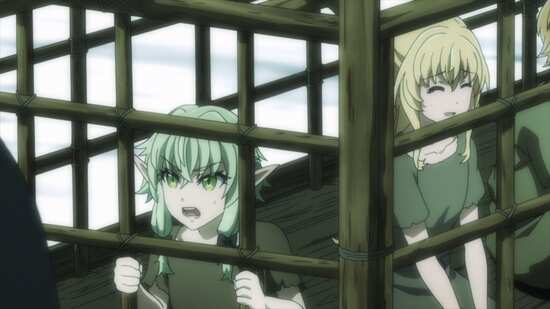 When it comes down to it, it takes those familiar characters established in the series, Goblin Slayer, Priestess, Dwarf Shaman, Lizard Priest, and High Elf Archer, and gives them a new goblin threat to deal with. If you want the film to move things on, and develop the characters further, then you’ll be disappointed. If the second series does the same... well I’m really just borrowing trouble at this point. 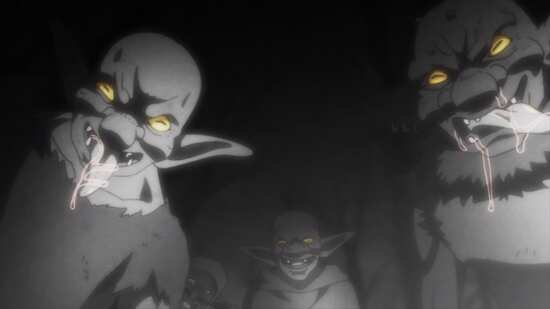 One good thing is that the film starts with a 20 minute recap, with some recycled footage from the series, as Priestess relates their adventures to this point, hitting the highlights, and making sure that newcomers to the franchise have enough familiarity to engage with the film. A cynic might say that the recap offsets the fact that the main story just isn’t meaty enough to sustain for much more than an hour. But I’m not that cynical, especially as the story we do get turns out to be pretty good, especially in terms of character, narrative, action, and indeed animation quality. 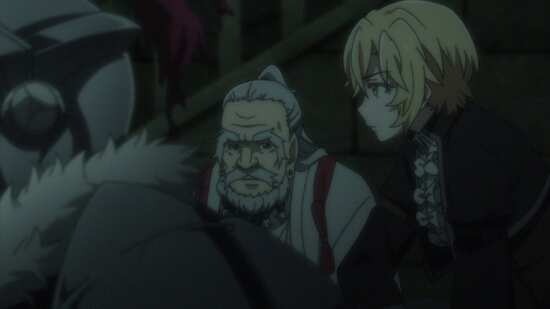 The mission to rescue the band of adventurers takes the group north into an arctic climate, with plenty of cold, forbidding snow. The new batch of goblins is wily and adaptable, and they have a leader who had the muscle and presence to intimidate even our protagonists. They’ve taken over a former dwarf stronghold, so they’re behind castle battlements, and have access to a lot of weaponry as well, and they have plans. 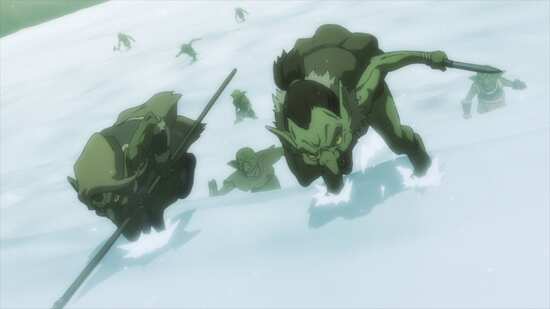 When Goblin Slayer and the others find the objective of the mission, it also presents an opportunity for character analysis and retrospection. For Priestess, she sees herself in the girl they rescue, a leader who confidently decided to take on the goblins, and wound up facing the same fate that Priestess once did, having severely underestimated the foe. But the victim is no priestess, she’s a warrior, and in that regard, it’s Goblin Slayer who empathises with her more, a survivor with PTSD, having suffered greatly at the hands of the goblins, and now walking the line between succumbing to trauma, and seeking revenge. In his own, monosyllabic way, Goblin Slayer gives her the sympathy, and the room to falter that she needs to begin to heal. 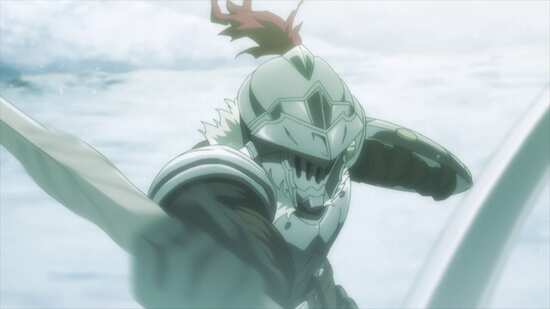 Of course there is a whole army of goblins to kill, and the film delivers on the promise of blood and gore, and even ups the level from the series. So while Goblin Slayer: Goblin’s Crown doesn’t offer much that differs from the original television series, it does look at that familiar material with a new perspective, which makes the feature film spin-off a worthy continuation. Of course that approach won’t be enough for the second series when it comes out, but as I said previously, I’m just borrowing trouble. This Blu-ray release of the film presents the feature with the quality that you’d expect, although the absence of a 5.1 Japanese track was noticeable. Goblin Slayer fans will be very happy though.