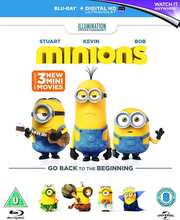 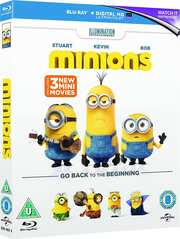 I think my usual scepticism about modern Hollywood family animation may in fact not be challenged by my appreciation of the Despicable Me films. When you look at the talent behind the films, it transpires that these are really more French productions than American. That’s how I’m justifying it, and feel free to criticise my obvious hypocrisy. Meanwhile, I’m taking a look at the feature film spin-off from the Despicable Me series, the one with the cute Minions, which turned out to be way more successful than the original property. 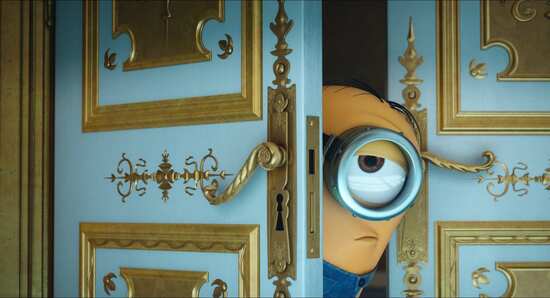 Long before the cute little yellow pill people found their natural employer in Gru, they had to search long and hard for their ultimate boss. With a history stretching back millions of years, they’ve tried serving all manner of terrifying beasts. It’s when a new species appeared on Earth, humans that they found the epitome of villainy that they would be perfect to serve. But through human history, the Minions’ innate silly clumsiness would be more dangerous to their erstwhile bosses than their evil schemes. It got to the point that for their own safety, the Minions left civilisation, and found a quiet, isolated cavern to found their own kingdom. 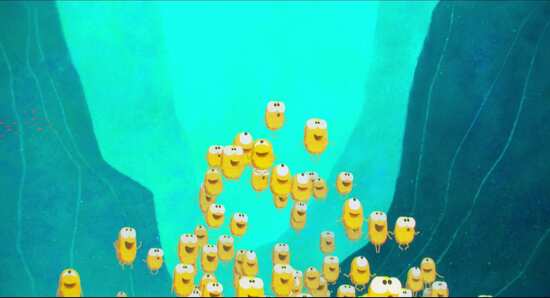 Yet without a boss to serve, the life and joy left the Minions, depression and apathy took hold. An aspiring Minion named Kevin came up with a plan to change all this. He’ll leave the cavern and go and search once more for the perfect boss, and with his friends Stuart and Bob, the three set forth. It’s 1968, and they arrive in New York, finding the world has finally developed to the point where the Minions can fit in. There’s a secret convention for villains being held in Florida, and the world’s most infamous super-villain, Scarlet Overkill will be there. And she’s looking for henchmen. 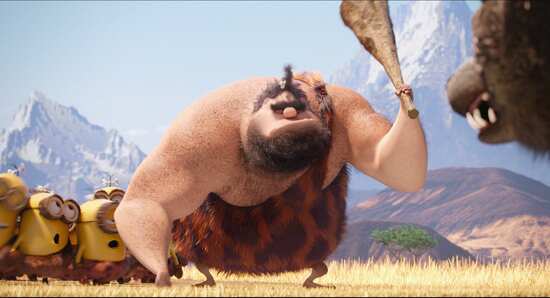 Minions gets a 1.85:1 widescreen 1080p transfer with the option of Dolby Atmos English, Dolby Digital 5.1 Surround Arabic, Spanish, Hindi, Hungarian, and Polish, as well as DD 2.0 Stereo English Audio Descriptive, with subtitles in these languages. It’s digital CG animation of course, so you’d be justified in expecting a pixel perfect transfer. You won’t be disappointed here, and Minions allows you to marvel at the wonderful and quirky characters, the detailed world design, and the delightful imagination that has gone into crafting the various comic action sequences. The audio is excellent, nice and immersive and making the most of a great, 60s era music soundtrack. The Minions aren’t keen on intelligibility, but the dialogue is clear throughout. 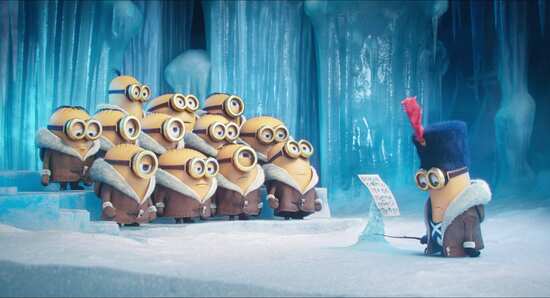 You get one disc in a BD Amaray case, and there is a UV code within. The disc boots to an animated menu.

There are more Minion goodies within beginning with three Mini Movies offering more with the characters. 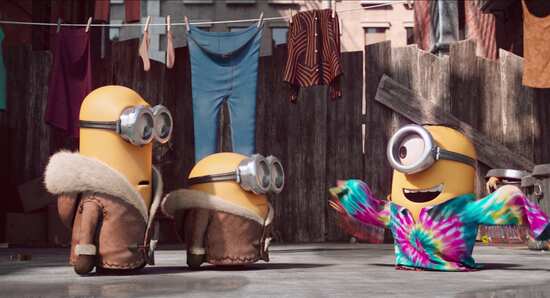 There is also the Jingle Bells Minion Style karaoke animation (1:52).

Around the World: Interactive Map presents the globe, offering clips from the film’s characters’ globetrotting, storyboards for deleted scenes of the same, and little bits of global trivia. 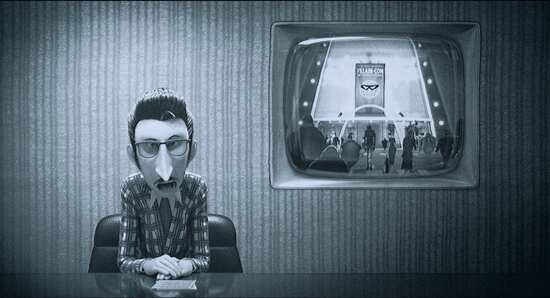 Behind the Goggles – The Illumination Story of the Minions takes a similar approach, presenting a visual representation of the Illumination studio hierarchy, from writers, actors, to the directors and producers and the like. Select any of these rooms, and the furniture within and you’ll get short 2 or 3 minute interviews, image galleries, animatics and storyboards. This feature will have you pleading for a Play All option. 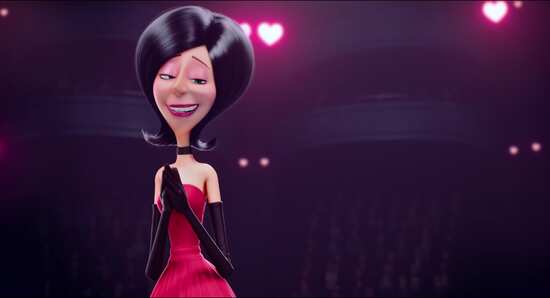 Minions is a whole lot of fun. It’s ninety minutes of entertainment that doesn’t let up, with delightful characters and a whole lot of imagination. You can see why the Minions movie outperformed the Despicable Me films that spawned it. With the characters essentially speaking their own specific gobbledegook, they attain a universality that transcends borders, and they become silent movie stars in their own movie, even if the human characters around them supply the exposition and clarify the plot. With the Minions themselves, the focus is on their physicality and the comedy. 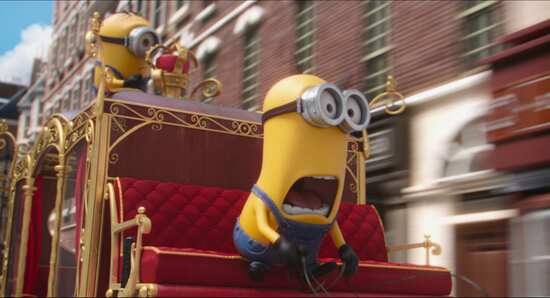 It’s a simple story as well, with the history of the Minions narrated, revealing them as natural born henchman eternally seeking an evil genius to serve. Their first potential boss is a Tyrannosaurus Rex, and they scupper the relationship with their own clumsiness, which sets the pattern of their lives to come in stone. It takes until the 1960s for them to find a potential villain worthy of their service when three of their number go on an adventure to find a boss. 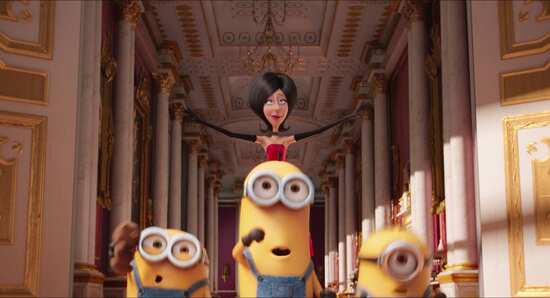 We’re introduced to adventurous and forward thinking Kevin, the comparatively level headed one of the group. I say comparatively, as he’s still prone to goofs and mishaps. Bob is the eager young space cadet of the three, most childlike and cute, and something of a dreamer. Stuart on the other hand is the wise guy of the group, not quite as invested in the mission, with aspirations towards being a musician. 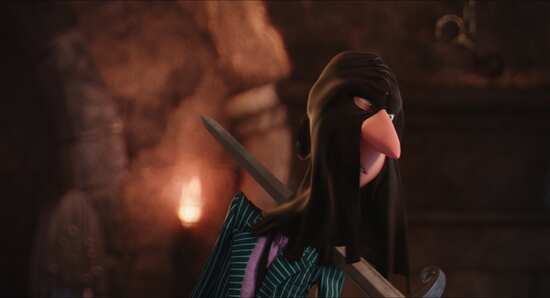 They encounter quite a few villains on their adventure, but it’s when they meet the world’s most infamous villain Scarlet Overkill that they think they’ve found their ideal boss. In this aspect, Minions follows on from the Despicable Me films, giving a Bond flavour to the characters, with grandiose evil schemes, and a reliance on fancy gadgetry. Scarlet has designs on the Crown of England, and decides that the Minions will raid the Tower of London for her. Only this time, their clumsy tendencies result in them being over-successful, incurring her wrath. 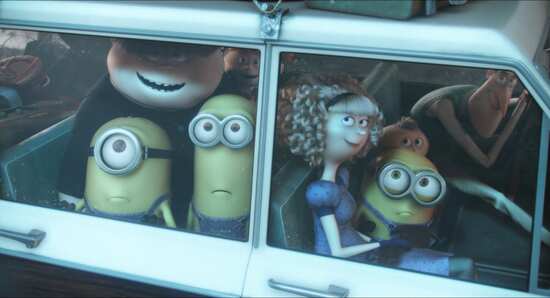 Better than the Despicable Me films that spawned it, Minions is a wonderful ninety minutes that the whole family can enjoy, delightfully imaginative and charmingly funny and avoiding many of the clichés that drive most Hollywood animations. This Blu-ray presents the film to wonderful effect, even if the way the extras are presented is finicky and frustrating.