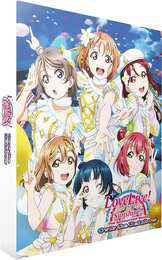 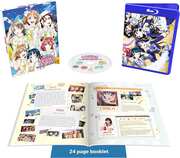 Review for Love Live! Sunshine!! The School Idol Movie: Over the Rainbow

The hardest thing I’ve made myself do is to quit being a fan. It’s especially hard with long running franchises. I stuck with Star Wars and its Expanded Universe years after the prequel trilogy gave warning of the direction of travel, and similarly with Star Trek, I held on for two TV series, one movie and maybe a hundred books past the time I should have given it up. You see, you keep hoping that the glory days will come back, that things will turn good again, never quite making the connection that when the people in charge of a thing change, the thing changes too, and rarely for the better. I say all this, as the Love Live franchise, the anime school idol phenomenon which appears to have more life to it than the CSI juggernaut, appears to have fired its first warning shot. If I’m smart, I’ll quit now. 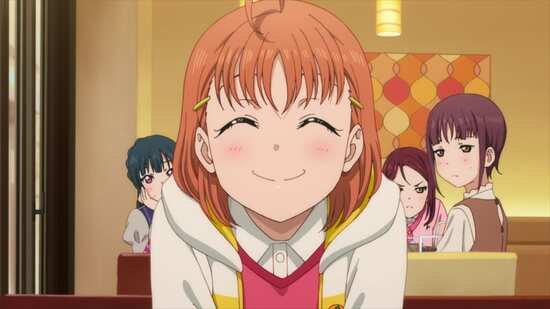 It took a while for the original Love Live series to grow on me; I wasn’t impressed by the original sub only release, but by the time the dub re-release happened, I was hooked enough to look for the Blu-ray as well. That came via MVM, but when it came to the feature film spin-off, that fell to All the Anime, and it happened rather belatedly, only a few months ago. The movie was a bit hit and miss as well, aping the K-On movie when it comes to the story, but on the bright side, it aped the K-On movie. I cared enough about the Love Live characters to enjoy the film regardless. It’s notable that the discs were all sourced from NISA in the US. 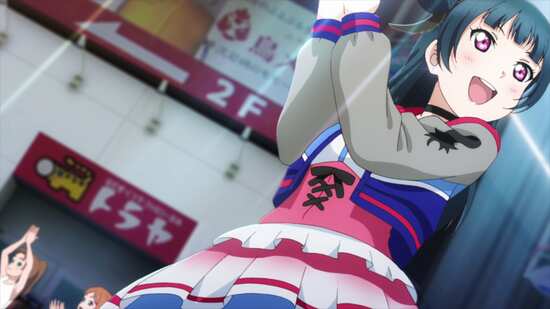 For the first sequel, Love Live! Sunshine!!, the franchise shifted from NISA to Funimation in the US, and from MVM to All the Anime in the UK. It has to be said that the release schedule from All the Anime wasn’t the greatest, and it took me a long while to get into the show, but in the end, Love Live! Sunshine!! did enough that was different from the original to make it a worthwhile sequel. μ’s, the group in the original Love Live! had a goal of winning the Love Live! competition, and saving their school, and while they managed the latter, they didn’t actually win. And as the year ended, with three of their number graduating, they decided to retire the group. 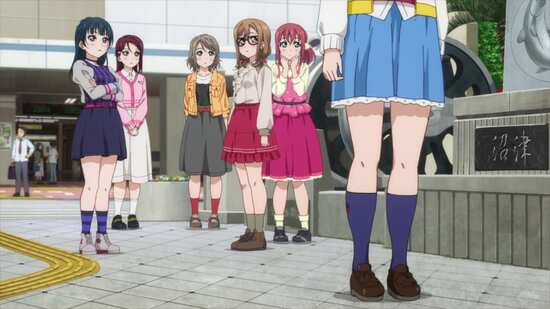 In the Love Live! Sunshine!! movie, the group Aqours actually won Love Live! but in the end couldn’t save their school from closure. And despite the three third-years graduating, they decided to continue the group in their new school. As the film begins, they’re having a hard time fitting into their new school, and an even harder time getting the group to work with six members instead of nine. Meanwhile, their three former members, Dia, Mari and Kanan are taking a graduation trip to Italy. Then Mari’s mother shows up, telling the girls of Aqours that the three have gone missing, and the six of them will have to go to Italy to find them. 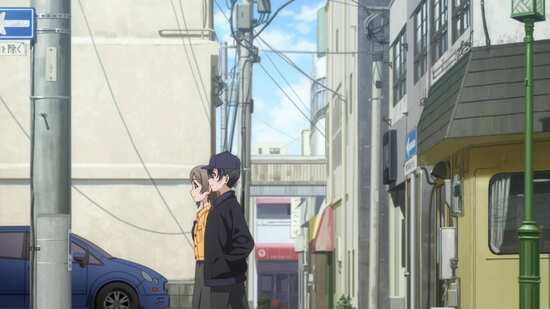 Love Live! Sunshine!!: The School Idol Movie - Over the Rainbow gets a 1.78:1 widescreen 1080p transfer with the choice between Dolby TrueHD 5.1 Surround English with signs, and Japanese with subtitles and signs, all locked during playback. The image is clear and sharp, with plenty of bright colours, and smooth animation, pretty seamlessly blending traditional 2D with 3D CGI for the song and dance numbers. The audio is nice and immersive, making much of the music, while the only nit to pick with the image might be the occasional and slight digital banding. Note that the songs are left in Japanese in the English audio. 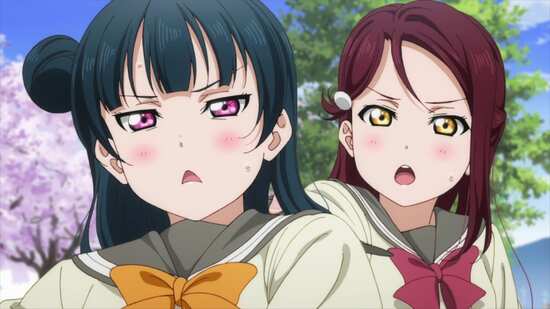 You get one disc in a BD Amaray case, with some nice inner sleeve art.

The disc autoplays a trailer for My Roommate is a Cat before booting to a static menu.

On the disc you’ll find 3:55 of the original Japanese trailers. 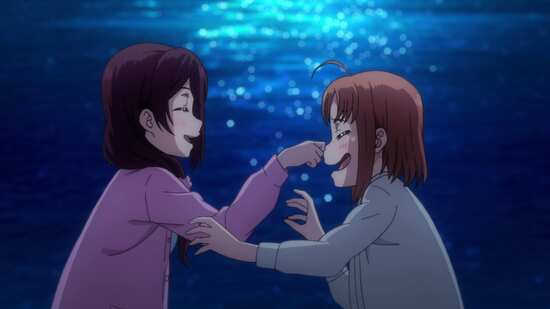 There is also the Love Live! Sunshine!! Photo Sessions, a little bonus for fans in the cinema, where picture dramas were projected on the screen featuring the characters, offering photo opportunities for fans, as long as they only used their phones to take the images. There are 10 slideshows here, running to a total of 42:06. 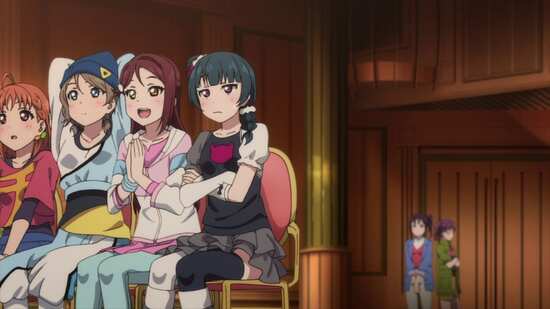 There is a 24 page booklet, with plenty of art and character guides along with voice cast interviews. And the whole thing is packaged in a rather gorgeous thick card artcase. The blurb sheet is held in place by the cellophane, and slides into the case as well. 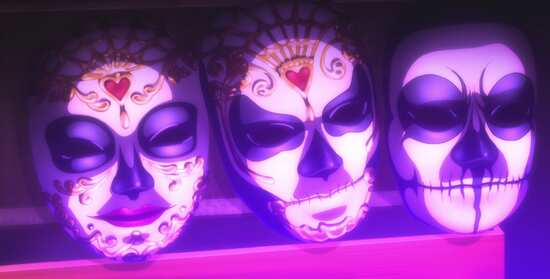 Another cute girls doing cute things series gets a movie spin-off, and once again there is a foreign trip allowing for an anime travelogue. In Love Live! Sunshine!!, the girls get to go to Italy, and do plenty of sightseeing as they search for their three former members. There are plenty of songs to while away the time, and plenty of character comedy as well. You might be expecting me to simply cut and paste the review for the first Love Live! movie and be done with it, only I can’t. Love Live! Sunshine!!: The School Idol Movie - Over the Rainbow is not very good, it’s not good at all and there are several problems that I need to note. 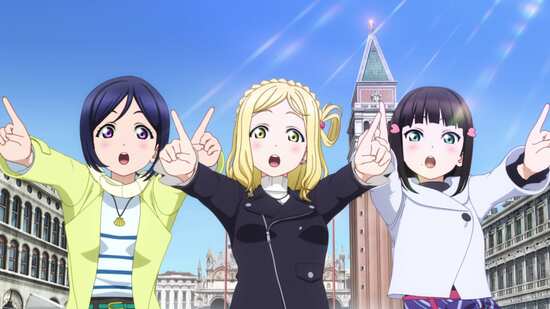 The first is that same problem I had with the original Love Live! Sunshine!! series, which caused me no end of problems getting into the series. The show was obviously a spin-off, with the same premise as the original Love Live! and much the same format, with a group with nine girls in. The characters in Love Live! were likeable, and felt comparatively natural in the way they were written and developed. In comparison, the girls in Love Live! Sunshine!! felt utterly contrived, shallow facsimiles of the originals, embodying many of the same character tropes but with the ‘volume’ turned up to eleven, they all seem rather forced. It took me the best part of 12 or 15 episodes to see past that, and appreciate the differences in the story, enjoy Love Live! Sunshine!! for what it is, and that turned out to be really quite good. 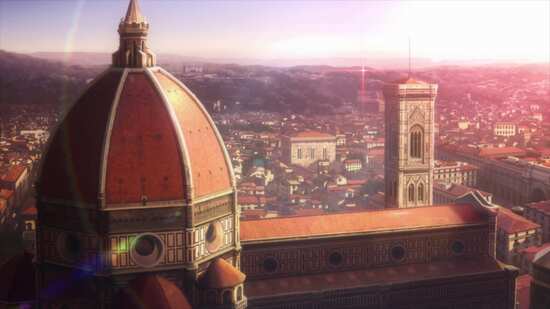 Here you have just 100 minutes, and that’s not long enough to get past the maxed out character settings, and they’re just annoying for the most part, annoying and screechy. Add to that, the story just isn’t good enough. While in the series, it was solid enough to transcend the characters, here the story is just as bad, put together quite clumsily, and never really gelling as a narrative. 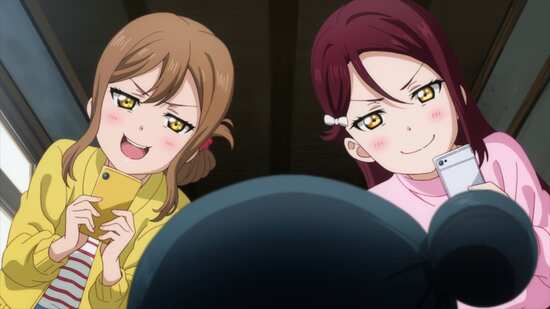 You have four story arcs at play here. The first is that of Aqours trying to find their place as a group of six, instead of nine, trying to figure out how much they have to change, and how much they need to keep. Their first attempt at doing this is apparently a failure. I say apparently as it happens off screen. We’re obviously not mature enough as an audience to see them fail. The second story arc covers much the same ground, but with their rival group Saint Snow, sisters Leah and Sarah, with Leah having to carry on alone, now that Sarah has graduated. The third storyline covers Mari, Dia and Kanan, who go missing in Italy, and need to be found, and have a problem resolved as well (with a song of course). Finally there is the difficulty for the girls of fitting into a new school, a school which might not appreciate what they have accomplished as school idols. 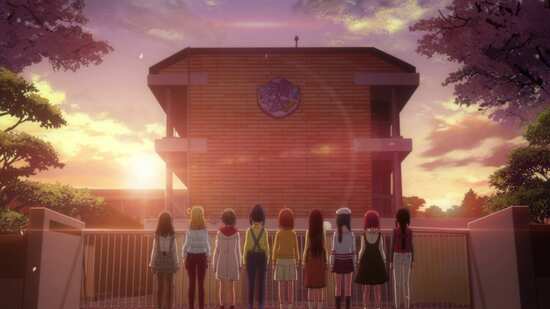 At least two of these story arcs are made to work together, and there’s no reason the rest of the narrative couldn’t have been as deftly constructed, but in Over the Rainbow, the film really does feel like elements of four separate television episodes, crudely shuffled together. It doesn’t work as a feature film all that well, and the ham-handed storytelling quickly gets tiresome. All the Anime’s package is just as impressive as for the first film, and the presentation on disc is pretty flawless. It’s just that after watching the film, I’m left with buyer’s remorse. My only hope is that it will work better off the back of the Love Live! Sunshine!! TV series, at which point extended exposure, will have inured me to the annoying clichéd characterisations, but as a standalone, this film is a disappointment.