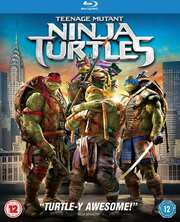 I know, I’m coming at these things backwards again. Last year, I found the sequel to this re-imagined Teenage Mutant Ninja Turtles feature film in a bargain bucket. I watched, and I quite liked it, even if I found it to be nothing special. It was better than the original Turtles movies, and it managed to entertain me enough to make me consider getting the first film. When you find that film in the same bargain bucket six months down the line, it’s time to stop considering. The thing that gave me trepidations about these films was the producer, Michael Bay. He’s reinvented one kids cartoon franchise to lucrative effect, but I’d rather watch Mark Kermode reviewing the Transformers movies on a loop for three hours instead of watching a Transformers movie. Thankfully, Out of the Shadows wasn’t a three hour orgy of noise and CGI. I’m hoping that the first film isn’t one either.

April O’Neil is a reporter for Channel 6 News in New York. Along with her cameraman/producer Vern Fenwick, she gets assigned all of the fluff pieces, but she wants to be so much more. She’s trying to be proactive as an investigative reporter, looking into the growth of the criminal Foot Clan in New York, but her description of a strange vigilante, thwarting one of the Foot Clan’s clandestine and illicit deals doesn’t garner any attention.

Her world changes when she finally encounters these vigilantes (for there are four), and they are like nothing the world has ever seen. She might have though, as a stray recollection sends her to industrialist and philanthropist Eric Sacks. Years ago, her late father worked with Sacks, experimenting with a strange mutagen, on four baby turtles and a rat that she as a child named Leonardo, Donatello, Raphael, Michelangelo, and Splinter. But the leader of the Foot Clan, Shredder has been looking for this mutagen to put his evil plans in motion, and April may have just led the Foot Clan to the last source of the mutagen on Earth.

Teenage Mutant Ninja Turtles gets a 2.40:1 widescreen transfer on this disc, with Dolby Atmos English, and DD 5.1 Surround English Audio Descriptive, German, Italian, Spanish, French and Hindi, with subtitles in these languages and Danish, Dutch, Norwegian, Finnish, and Swedish. The image is clear and sharp, pixel perfect and free of any visible compression or the like. It does wonders for the action, and the CGI is on a par with the sequel when it comes to consistency in character designs. The action comes across well, although it’s odd to see a film set in the winter months get the old orange and teal action movie colour grading. The audio is nice and immersive though, making great use of the speakers to put you in the middle of the action, while giving the film some Batman-esque themes. The dialogue remains clear throughout.

You get one disc in a BD Amaray case, wrapped in an o-card slipcover. The disc boots to an animated menu.

On the disc you’ll find the following extras. Note that the Turtles in 3D featurette offers two ways of viewing the extra, one which will only work if you are watching on 3D kit.

You might think that you’re getting that origin in the opening of the film, retelling that story in comic book form, before switching to live action. When the film begins, the Turtles are still in training under their sensei Splinter, told never to go to the upper world, which isn’t ready for mutant reptiles as saviours. Teenagers being what they are, they sneak into the city at night anyway, relying on their ninja skills to keep hidden, fighting the Foot Clan, and saving innocent lives along the way. But it’s clear at this point that they haven’t quite gelled as a team yet; four strong personalities pulling in different directions.

Meanwhile in the city, April O’Neil is looking to step up as a news reporter, and is investigating the Foot Clan in her own time, trying to earn enough brownie points to be taken seriously. Her credibility suffers when she encounters the turtles, but it also opens a door to the past, when it turns out that she’s familiar with these crime-fighting reptiles, and her father was indirectly involved in their creation, when researching a powerful mutagen. April rescued her ‘pets’ from the lab fire that claimed her father’s life, and set them free in the New York sewers, where the mutagen took effect.

That mutagen is key to Shredder’s plan to hold the world to ransom, and he and his Foot Clan had considered it lost in the fire. But now that the turtles have resurfaced, Shredder realises that the last of the mutagen resides in the turtles’ blood, and once he gets that, he can set his plan in motion.

What this boils down to in terms of the storytelling is that the origin story of the turtles is a key element in the overall plot. Shredder’s plan only makes sense if you explain how the turtles came to be. It makes for a much better narrative this way compared to the usual comic book adaptation, where you get the origin story first, then the superhero versus supervillain battle second, with at the most just a tenuous thread linking the two.

Teenage Mutant Ninja Turtles is fun. The turtles are brought to life very effectively, the characters are vivid and pop off the screen, and the film has a nice sense of humour to it, coupled with some well put together action sequences. It is a bit predictable though. I had figured out who Shredder’s partner in all this was before they had even said a word. There are some clichés that seem to be too strong to avoid in films like this, but at no point did the film make me roll my eyes. Compared to the Turtles movie trilogy of the nineties, these films are so much better.