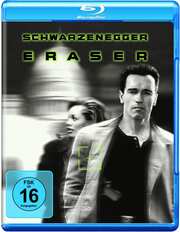 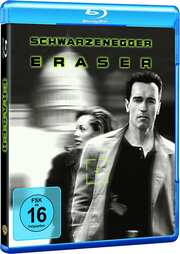 As I type this, there are two weeks until Brexit, finally, finally happens... probably, and we’ll have to start paying import duties and VAT on stuff we buy from Europe, although by the time this review actually goes live, it will probably be a moot point to advise getting this German Blu-ray release of Eraser. When I look at the DVD review I gave this film, the dismal grade makes me question why I double-dipped, until I remember that Eraser was cut for its UK theatrical release, and cut even more for its home video release. Those cuts were apparently waived in 2009, but no updated version was ever put out on disc. Right now in the UK, the only version available is the hacked and slashed DVD version, and for the Blu-ray, you’ll have to import from overseas, although this Warners disc is common for all territories.

Incidentally, when I clicked over to the BBFC to check just what had been cut from Eraser, I found that the BBFC had updated and dumbed down their website. They no longer list what films have been cut and how, which given what their raison d’être is, may just make it the most useless website on the planet now. It’s like going to the Amazon website with all the ‘buy’ links greyed out. The only solution now is to go to the Melonfarmers site and try and ignore all the porn ads while you search for the film you want to know about. Just when I thought 2020 couldn’t get any more 2020.

John Kruger is a US Marshall in the Witness Protection Programme with extraordinary latitude in discharging his duty. He makes sure that witnesses remain safe by ‘Erasing’ their identities, relocating them and setting them up in new lives. Usually his clientele consist of various criminal lowlifes who seek immunity from prosecution by testifying against their former comrades. But when Lee Cullen, an employee of Cyrez Weapons decides that her employers are up to no good, selling futuristic weapons to foreign powers, she volunteers to gather evidence and testify against them. John has to protect her but it isn’t easy, especially when they use their own products against her. And hiding her isn’t enough, when the conspiracy extends to the highest levels of the US government and even the agency isn’t above suspicion.

This German release of Eraser came out in 2013, but the disc dates back to the start of the BD era, 2008. The 2.40:1 widescreen 1080p transfer is getting long in the tooth and showing its age, but it’s good enough to watch. It does look like one of those discs that have the same source as the DVD though. The image is clear and relatively sharp. Colours are consistent, and Eraser still has the electric blue industrial feel that I remember. But the Blu-ray isn’t quite as sharp and as HD poppy as you might like, DNR has been liberally applied, grain is practically absent; skin tones don’t feel quite organic and there is a bit of black crush at times. Of course the CGI has seriously dated.

You have the choice between Dolby TrueHD 5.1 Surround English, DD 5.1 Surround English, German, Italian, Spanish, French, and Portuguese with subtitles in these languages and Danish, Finnish, Norwegian Swedish, Chinese and Korean. The disc autoplays the film with the lossy audio, so you’ll have to remember to switch. The action comes across well with the surround track, effective and immersive, while the music drives the pace of the movie without ever quite being memorable. The cheesy dialogue is clear throughout.

You get one disc in a thin BD eco-Amaray (the one with bits of plastic cut out of it). The disc will autoplay the movie on insertion, and the pop-up menu will let you change your audio options or navigate the film. After the film ends and the copyright screens flash by, the disc will throw up a static menu screen where you can start the film again.

There are no extras with this release. The DVD had a trailer and some text filmographies, but the Blu-ray couldn’t even manage that.

I was pretty unkind to Eraser when I reviewed the DVD, and not just because of the hatchet job applied by James Ferman to make it a ‘better’ film. In 1996, in the pre-Governator years, Arnold Schwarzenegger was in his prime, coming off Terminator 2 and True Lies, and he was also beginning to broaden his range as an actor. Against all that, Eraser seemed like a throwback to the wise-cracking, scenery chewing pop-corn action movies of the mid-eighties. Sure, Eraser had its high concept sci-fi plot elements, but the dialogue was as corny as hell, and the action was dumb, testosterone, chest-thumping cartoon silliness. That’s no less true today.

I wasn’t looking for that in 2002, but in 2020, I’m actually feeling nostalgic for the nineties. Eraser is actually the last gasp of those daft Arnie action movies that so enthralled me in my childhood and youth. This is perhaps the last time Arnold had as much cigar-chomping fun as he did in films like Commando, Raw Deal, The Running Man and Predator, and thereafter things would get edgier, less fun in films like The 6th Day, Collateral Damage and End of Days. This was probably the last time I saw the Arnie that originally hooked me on action cinema to begin with, and saying that, Eraser holds a warm, nostalgic place in my heart that I probably wouldn’t have given it even ten years ago.

Eraser is a ‘one man against the world’ action movie, with only John Kruger able to fight the world and win. This he does by dispatching bad guys in as many brutal ways as possible, one-liner-ing his way through fight sequences; the lone wolf in a team job. It’s when he has to protect a whistleblower against the company that she works for, an evil arms dealing corporation with ties to the highest levels of the US government, that they find themselves alone and on the run, and the only way to turn the tables against the bad guys is seeking help from some of the low-lifes that Kruger ‘erased’ in the past; enter the comedy cuddly mafia guy.

The Maguffin, the ridiculously large rail-guns and the overblown special effects that go with them look impressive on screen, but are dumb in the context of the story, and the dialogue is so corny (most of it delivered by James Caan looking like he couldn’t be asked) that it makes my teeth itch. All of this was reason to denigrate the film on DVD, and all of this is reason why I enjoy the film so much now. Eraser is in the so bad it’s good category, and perfect to switch your brain off and devour popcorn at. The Blu-ray is a little lacklustre, but it is uncut, and actually watching the movie instead of the shreds left behind on the UK DVD is infinitely better. I also doubt that this film will get another go around at HD, or even a UHD release but stranger things have happened.