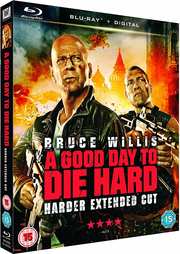 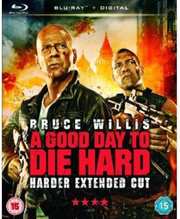 Review for A Good Day To Die Hard

It was going to happen. Having seen, and bought Die Hards 1-4 for my collection, I would get around to watching the fifth film in the franchise, despite all the dire reviews and the lack of fan appreciation. I only paid £2 for the privilege, and I have set my expectations at the lowest that they can go. This is after all a Die Hard film. No matter how bad it might get, it does have John McClane. He’s such an iconic character that I should be able to forgive any sins committed to celluloid in his name. I do have a soft spot for Die Hard 4.0, even though it was at the time, the worst rated of the franchise. The story may be pure cheesy rubbish, but the film got its central characters right, and it had a sense of fun to it. Let’s see if the fifth film is better than its reputation. Then again, it did get 10/10 from the Daily Star! 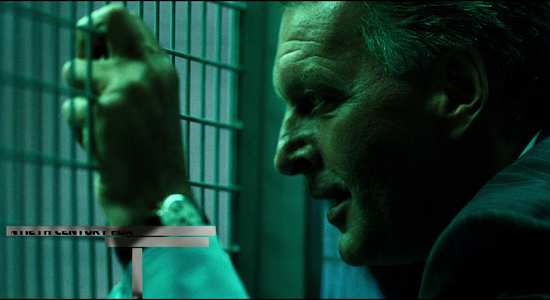 John McClane has never had a satisfactory relationship with his son, so it’s almost with a weary sense of resignation that he has to go to Russia when he learns that Jack is on trial for his life. It seems like the culmination of a life on the wrong side of the tracks, but things get more serious when the court building is attacked by a mysterious group, and in the mayhem Jack escapes, along with a political prisoner named Komarov. It turns out that there is more to Jack than just a delinquent son, and John McClane is about to be dragged into a fight for the future of the world. He’s going to have another bad day, if he can’t reconcile with his son.

The disc has the theatrical version of the film (97:39), and the Harder Extended Cut (101:11). For the purposes of this review, I watched the latter. 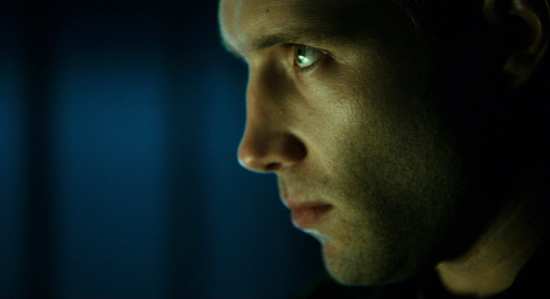 The film gets a 1.85:1 widescreen 1080p transfer, with DTS-HD MA 7.1 Surround English, and DD 5.1 Surround French and Spanish with subtitles in these languages. If you watch the theatrical version of the film, you can also access a DD 5.1 English Audio Descriptive track. It’s not a disc to pick holes at, the transfer is fine, free of compression and similar artefacts, detail levels are excellent and the colours are consistent. The audio too does just what the film needs to bring the action across, really immersing you in the middle of the story. About the only issue might be some mumbled dialogue. The problems lie in the film itself, not least some unmemorable and monotonous music, and a film that is colour graded to within an inch of its life, shaky cam action, and the kind of post-processing where you can’t really tell what is CG and what is live action (and not because the CG is that good). 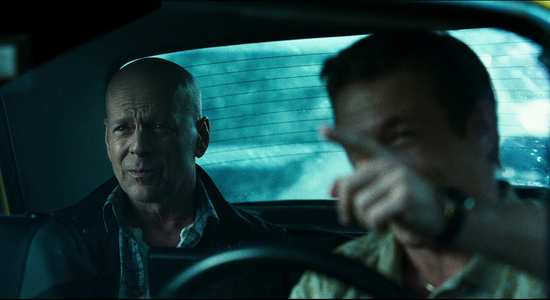 You get one disc in a BD Amaray Case, which after an anti-piracy thank you boots to an animated menu.

There are plenty of extras with this film, none of which I intend to watch, so here’s a simple list. 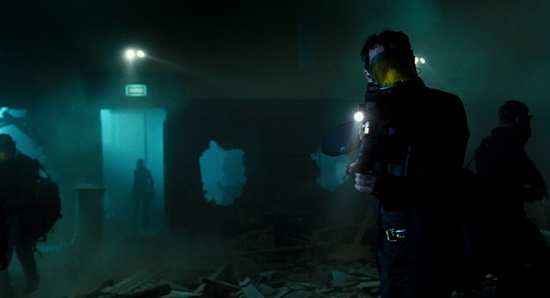 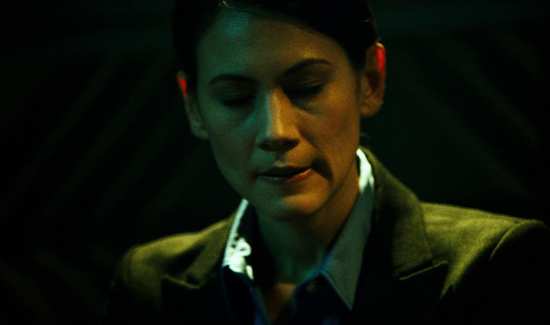 Apparently in the theatrical version, Mary Elizabeth Winstead reprises her role as Lucy McClane from Die Hard 4.0. I am not compelled to revisit this film just to see that. Watching the Harder Extended Cut was enough for me to realise that for once, the negative press about a film was deserved. My eyes did not bleed, I wasn’t forced to vomit, I didn’t scream into the night at the injustice of having 100 minutes of my life cruelly stolen from me. About the only effect this film had on me is the compulsion to write about it afterwards, and I get that with everything that I watch anyway, good or bad. A Good Day to Die Hard definitely falls into the bad category, however. 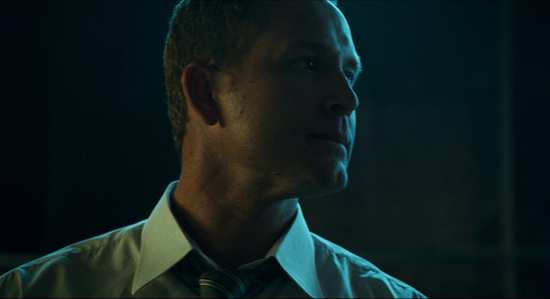 The penny dropped with the film’s first real action sequence, the car chase after the attack on the courthouse. It’s a masterpiece of shaky cam and bad editing. We have Jack and Komarov escaping in the van, the villains giving chase in an armoured truck, and John McClane grabbing the first beast of a truck that he can find and chasing after them both. It wasn’t long before I was utterly confused as to the narrative and the choreography of the chase, and when random cars started meaninglessly crashing from no visible cause, apparently out of some sense of solidarity, I gave up trying to figure out what was happening, and decide to just wait till the end to see who was left standing. Suffice it to say, this was a common complaint that I had with the action in the film. I wasn’t invested in any of it, didn’t care who won or lost, just waited for the dust to settle to see what had happened. 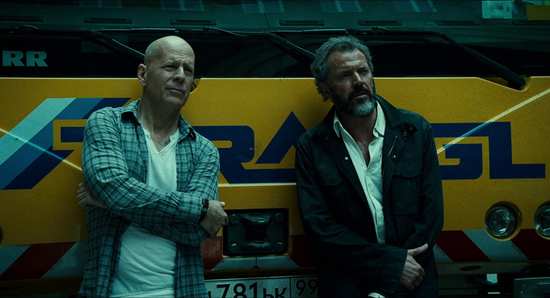 It’s Tex Avery, Looney Tunes violence and action. Often in old episodes of the A-Team, you’d see a horrendous crash, and the camera would cut to the aftermath to show everyone staggering away from the wreck, a little dazed and confused and none the worse for wear. That the McClanes get away from a couple of incidents like that is to be expected given the last film, but now the villains are surviving in that manner as well. It’s a joke. Once more we’re presented with super-McClane, a character who knows full well that he won’t die, as he is the hero. He can stand up while the bad guy empties a machine gun clip at him, safe in the knowledge that every bullet will miss. 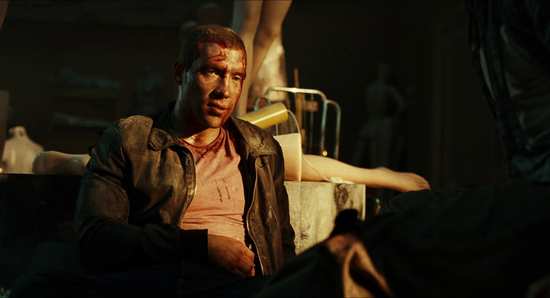 The stakes are higher than they have ever been in a Die Hard movie. Sure, it’s another cash grab by the villains, but this time its underpinned with global politics and stray nuclear weapons, which sees John McClane and son in James Bond territory, fuel for a couple of one-liners. But never have I been less invested in a Die Hard movie. Even the previous film offered some peril for Lucy McClane, and despite the virtual S painted on his chest, John did look a little worse for wear at the end. Not in this one. The narrative stakes may be higher, but the emotional stakes are non-present, with the action pausing only occasionally for some cheesy father son reconciliation, and with one particularly hackneyed scene, if not inducing vomit, still made me queasy. 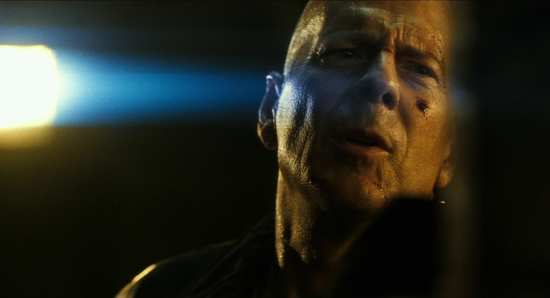 A Good Day to Die Hard is a stupid name for a stupid film. But I didn’t hate it. I may even have been entertained by it. It may not be the guilty pleasure that Die Hard 4.0 has turned out to be, but its Wile E. Coyote and Roadrunner antics managed to hold my attention for 90 minutes, and the rare moments that I could make out what was going on in an action sequence might even have entertained. I think the trick of it is to try not to remember any of the other Die Hard movies while watching it, and you might make it through without wanting to throw the franchise a wake.