Article
Alvin and the Chipmunks: Chipwrecked on DVD and Blu-ray this April 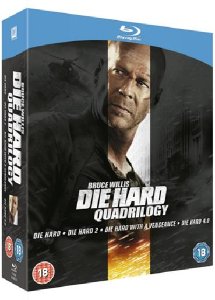 When Bruce Willis exploded onto the big screen back in the 1980's as John McCLane, a smart, funny, one-of-a-kind New York City cop who lands in one-of-a-kind predicaments, millions of cinema goers worldwide cheered him on and the bar for action films was raised forever

Can be pre- ordered now from Amazon or Play.com

Die Hard: Bruce Willis rocks as New York City detective John McClane, who's in Los Angeles to spend the holidays with his estranged wife Holly (Bonnie Bedelia). But while McClane waits for Holly's office party to end, terrorists take control of the building. As their sinister leader, Hans Gruber (Alan Rickman), and his savage henchman (Alexander Godunov) round up hostages, McClane gets ready to blast a few rounds of his own and launch a one-man war- as McClane can!

Die Harder: What is it about John MClane and the holidays?! Here it is, Christmas Eve, and McClane is off-duty in the nation's capital. But a team of terrorists, in town to rescue a drug lord from justice, having taken over a major international airport, holding thousands of traveller's hostage. Amidst a blinding blizzard, McClane must race against time to defeat the terrorists and their murderous leader (William Sader). And if that's not a big enough lump of coal in his stocking, he's also contending with an inept airport police chief (Dennis Franz), the stubborn head of the army's anti-terrorists squad, and the knowledge that his wife is trapped in a plane desperately low on fuel, circling overhead!

Die Hard With A Vengeance: Bruce Willis is back on duty as Detective John McClane about to face his greatest challenge ever in his action-packed blockbuster hit. In New York City, McClane's newest foe (Jeremy Irons) wreaks havoc in downtown Manhattan and then reveals that more destruction throughout the city will follow if his demands are not met. Caught in a twisted game of hid and seek, McClane and an unlikely hero (Samuel L Jackson) race against time and frantically attempt to stop further ruin. Dodging unforeseen danger at ever turn, Willis takes non-stop action and narrow escapes to the ultimate extremes to win the day.

Die Hard 4.0: New York City detective John McClane delivers old-school justice to a new breed of terrorists when a massive computer attack of the US, infrastructure threatens to shut down the entire country over Independence Day Weekend.