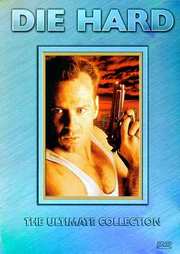 Back Cover of Die Hard: The Ultimate Collection

Die Hard: The Ultimate Collection (US) 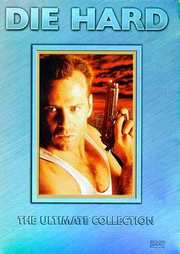 Synopsis:
Die Hard - Special Edition:
High above the city of L.A. a team of terrorists has seized a building, taken hostages, and declared war. But one man has managed to escape detection… an off-duty cop. He`s alone… tired… and the only chance anyone has.

Bruce Willis stars as New York City Detective John McClane, newly arrived in Los Angeles to spend the Christmas holiday with his estranged wife (Bonnie Bedelia). But as McClane waits for his wife`s office party to break up, terrorists take control of the building, While the terrorist leader, Hans Gruber (Alan Rickman) and his savage henchman (Alexander Godunov) round up hostages, McClane slips away unnoticed. Armed with only a service revolver and his cunning, McClane launches his own one-man war. A crackling thriller from beginning to end, Die Hard explodes with heart-stopping suspense.

Die Hard 2: Die Harder - Special Edition:
On a snowy Christmas Eve in the nation`s capital, a team of terrorists has seized a major international airport and now holds thousands of holiday travelers hostage. The terrorists, a renegade band of crack military commandos led by a murderous rogue officer (William Sadler), have come to rescue a drug lord from justice. They`ve prepared for every contingency except one: John McClane, an off-duty cop gripped with a feeling of deadly déjà vu.

Bruce Willis returns as the heroic cop who battles not only terrorists, but also an incompetent airport police chief (Dennis Franz), the hard-headed commander (John Amos) of the Army`s anti-terrorist squad and a deadly winter snowstorm. The runways are littered with death and destruction, and McClane is in a race against time. His wife (Bonnie Bedelia) is trapped on one of the planes circling overhead, which is desperately low on fuel.

This time, New York cop John McClane (Willis) is the personal target of the mysterious Simon (Jeremy Irons), a terrorist determined to blow up the entire city if he doesn`t get what he wants. Accompanied by an unwilling civilian partner (Samuel L. Jackson), McClane careens wildly from one end of New York City to the other as he struggles to keep up with Simon`s deadly game. It`s a battle of wits between a psychopathic genius and a heroic cop who once again finds himself having a really bad day.

About time a decent release of the Die Hard films worthy of our collections. Fox has treated all three movies with lavish two disc sets.
Die Hard was the surprise hit of 1988 and you can see why. Bruce Willis fits the role as gun-toting cop John McClane well.

Die Hard:-
The first film is highly enjoyable and is THX digitally remastered (Thanks George!) and to go with that a DTS source which thunders round your speakers.

Die Hard 2:-
not as enjoyable as the first, the weakest in the series but has been treated well on the DVD Format.

Die Hard With A Vengence:-
this highly enjoyable second sequal restored my faith in the die hard series after the rubbish Die Hard 2, Bruce Willis and Samuel L. Jackson`s on screen chemistry is really good fun to watch.

Extras:-
each film comes with an Audio Commentry all informative but directors John McTiernan and Renny Harlin are a little boring. Deleted Scenes are fun for DH and DH 2 and the Alternate ending for DH3 really good, the rest fillers, documentaries etc.
posted by verhoeven on 17/11/2001 12:51
10 / 10

Hundreds of films have tried to be a box office smash...
...and failed.

These three however were totaly deserving of their status of box office smashes.

Most people have heard of Die Hard. It reinvented the action genre and provided a template hero (not to mention villain) for hundreds of films to copy. It was a sensation and brought Bruce Willis into the public eye - before Die Hard his biggest claim to fame was his role in "Moonlighting".

Picture quality here is very good (and better than any other release out) but it doesn`t compete with newer action films. The sound is where the THX mastering comes into it`s own, with a well balanced track that will keep anyone happy.

Extras-wise the two discs are packed, there is too much to mention here but needless to say it`s all great. Particular highlights include the scene editing workshop and the text commentary.


Die Hard 2: Die Harder backed up the rule that, in sequels, bigger is better. It upped the action, the budget and the body count (the highest of it`s day). Some people will argue that it`s too clichéd, or that it lacks any depth, the fact is that these people "Think Hard" and in a film like this, you should just enjoy the ride.

Picture quality is about the same standard as Die Hard and makes a massive improvement on all previous releases. Sound is again excellent (though not quite as good as Die Hard) and will keep most people happy.

Extras here are not quite as comprehensive as Die Hard but still are better than a lot of two-disc sets. It is worth mentioning director Renny Harlin`s audio commentary which is very in-depth and provides some very interesting facts.


Die Hard: With A Vengeance tweaked the formula slightly and, with John McTiernan back on board as director, we get another roaler-coaster ride of thrills spills and kills with a brilliant performance from Samuel L. Jackson.

Other than some obvious edge enhancement picture quality is better than both of the previous films and looks great when compare to most current releases. Sound quality is brilliant, this time making good use of the surrounds and excellent use of the LFE channel while still being cinematic.

Extras are of the same standard as Die Hard 2. The highlight is the alternate ending which shows a far darker side to the procedings.

Overall this is an excellent package and worthy of a place in anyone`s collection - no matter how much a fan of the films you are.
posted by Flesh-Eating-Zombie-Killing-Rogue-Demon-Hunter on 20/2/2002 17:26
8 / 10

The following is a review of Die Hard: Five Star Collection

Released in `99 as a bare bones disc with a non-anamrphic
transfer,20th Century Fox has now re-released the movie as
part of their Five Star Collection.

"Die Hard" is presented in THX-certified,2.30:1 anamorphic
widescreen.Aside from some minor defects,including some film grain and some white specs,this is a very solid and
satisfying picture.Jan De Bont`s cinematography comes across very well with this new transfer.Although the picture is
THX-certified,there is no THX optimizer on this disc.

A terrific Dolby Digital 5.1 track accompanies the movie.This
track is top notch as the bullets and explosions will rattle your
living room.A DTS 5.1 track is also availible for those with a
DTS receiver.The packaging says a Dolby Surround track is
availible,but its no where to be found on the disc.

Disc 1 features no less than three commentaries:The first
features Director John McTiernan and Production Designer
Jackson DeGovia.The two were recorded separately and their
comments are of a very technical nature,but the track remains
pretty interesting.The Second commentary is scene-specific
and features F/X supervisor Richard Edlund who talks about
differents subjects including 65mm and anamorphic.The third
commentary is in subtitle form and features interviews with
members of the cast and crew.To be honest,I prefer to hear
commentary instead of reading it.

Disc 2 features 2 interactive magazine articles,the full screen-
play,a gag reel,deleted lines and scenes,an interactive still
gallery,and 3 trailers and 7 TV spots.The best feature is
called "The Cutting Room" and is divided into 5 sections:
The first is "The Scene Editing Workshop":this features lets
you re-edit three scenes from the movie,including McClane in
the air duct and Takagi in the boardroom.The second section
is "Multi-Camera Shooting" and features several examples of
different camera filming.The third section is "Audio Mixing"
and allows to you toggle between sound effects,music,and
dialogue,with the the glass shooting scene.The fourth is "Why Letterbox" and features commentary by Disc Producer David Prior and Larry Yor.This section shows you why It is best to watch movies in widescreen.The final section
is a glossary of filming definitions.Another extra is a 7-minute
promo piece made back in `88.There are also DVD-ROM links
and game demos.

DIE HARD. This is the best of the three films. The box-ofice smash hit is wildly entertaining. Bruce Willis is at his best as John McClane, our luckless hero and Alan Rickman gives a carear best as Hans Gruber, the mastermind terrorist.

DIE HARD 2. The weakest in the all action trilogy. Renny Harlin produces a film that has a few moments that are good but overall the film isn`t that brilliant. Bruce Willis and the rest of the cast try their best with the crappy script by Steven E. de Souza which tries to capture Die Hards magic formula.

DIE HARD 3. With original director John McTiernan returning to the helm to direct the best of the two sequels and casting Samuel L. Jackson as Willis`s unlikely partner is brilliant. The film is good and writer Jonathan Hensleigh (Making the film `The Punisher` at the moment) does capture that Die Hard magic and puts a twist on it. Jeremy Irons is good as the deranged Simon Gruber.

Top notch on all three films, the first benifiting the most with it`s THX and DTS. Though the other two films have amazing sound.

All three have commentaries by the two directors but both are boring. The two disc sets are packed to the rim with behind-the-scene footage. The deleted scenes are nothing special. The best extra is Die Hard 3`s alternate ending which HAS to be seen.
posted by the_film_king on 7/8/2003 18:09