Review of Die Hard With a Vengeance: Collector`s Edition (2 Discs)
added by
RWB
Places to Buy 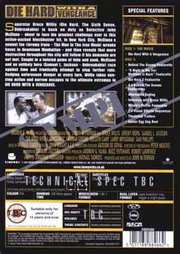 Back Cover of Die Hard With a Vengeance: Collector`s Edition (2 Discs) 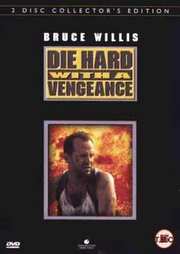 Synopsis:
Bruce Willis (`Die Hard`, `Pulp Fiction`) is back on duty as Detective John McClane - about to face his worst day yet in the action-packed blockbuster of the year!

In New York City, a crafty terrorist (Jeremy Irons - `Reversal of Fortune`) explodes a bomb in a crowded shopping mall - and then reveals that several more are hidden throughout the city!

Caught in a twisted game of hide and seek, McClane and an unlikely hero (Samuel L. Jackson - `Pulp Fiction`) frantically search for the remaining bombs before New York is blown to bits. Dodging death and destruction at every turn, Willis takes explosive action and narrow escapes to the ultimate extreme in `Die Hard With A Vengeance`!

Not the best DIE HARD ever made but still good.

THE EXTRAS ARE GOOD BUT COULD BE BETTER.

IT REPEATS SOME OF THE SAME STUFF.

BUT DIE HARD 1 DVD IS STILL THE BEST

"Die Hard" is quite possibly the quintessential American action movie. A huge hit both critically and commercially thanks to the likable character of John McClane, played by Bruce Willis and John McTiernan's first-rate direction. Its sequel "Die Hard 2: Die Harder", though a bigger hit was less well received. Particularly because new director Renny Harlin change the taunt, character-based thriller of "Die Hard" into an R-dated Bond film. So, many rejoiced as John McTiernan came back for "Die Hard With A Vengeance".

"Die Hard With A Vengeance" is different to the previous two outings- it is more of a cat and mouse thriller than a siege hostage films. Perhaps because the formula of Die Hard on a. boat (Under Siege), plane (Passenger 57) etc… was running a bit thin. So the "Die Hard" series needed to reinvent itself. Thankfully they didn't reinvent the McClane character and he's his usual sarcastic, laconic self.

Unlike Americans, us R2-ers only got a Die Hard 1&2 box set. This is because Buena Vista holds the international distribution rights. So here it is and thankfully it is identical to the Fox R1 release.

Video: Unlike previous releases, "Die Hard With A Vengeance" sports a 2.35:1 anamorphic transfer. McTiernan and DOP, Peter Menzies has filmed the film in a very documentary, "you are there" way. Cameras whip swiftly, making some aspects of the transfer very hard to judge. Still, the transfer is sharp without much edge enhancements. Colours and flesh tones are very actuate and aesthetically pleasing. There are a few defects on the print such as dropouts and grain but the transfer is very good looking nevertheless.

"Die Hard With A Vengeance" is an action film and so has many set pieces. Thankfully unlike so many of today's action films, these were done for real (with the exception of the fake looking truck-surfing film) and they look good, although I am disappointed with the lack of gunplay in the film.

Audio: "Die Hard With A Vengeance" boasts a powerful 5.1 to complement the onscreen action. Bass is strong and concise (the opening explosion is a good example of this) and surrounds are used for ambience, such as to expand the New York City environment, and directional effects, such as bullets. Dialogue is always clear.

Although the films lack a big score, due to McTiernan's documentary approach, it does contain a memorable scene in which a Bank robbery is set off to the music and is done very well.

Extras: "With A Vengeance" is probably the most features packed Die Hard DVD. Up first is a feature length commentary with director John McTiernan, writer Jonathan Hensleigh and executive producer Andrew g. Vajina. I found this to be the most interesting of the Die Hard commentaries because there is quite a story behind the film, such as the development of a script called "Simon Says" to a "Die Hard" script. The three talkers are recorded separately and edited together. Normally I don't like this procedure, but this time it works quite well. It is well balanced and there is never a dull moment.

Disc 2: There are three "making of featurettes" on Disc 2:

1)"A Night To Die For/McClane Is Back" (21 minutes). This is a program shown in conjunction with a Die Hard night on some American channel. As well as being promotional material for "Die Hard With A Vengeance", it also looks back on the previous installments and some celebrities share their favourite moments of the films. It is expertly presented by Sam Jackson.

2) "Behind The Scenes: HBO Special" (21 mintues) is better than average PR guff, hosted by Reggie Johnson (Al from the original). It offers some good behind the scenes footage as well as the obligatory interviews.

3) Die Hard Featurette (4 minutes) is quite redundant, as all the footage has already been covered in the previous two featurettes.

These EPK materials are a great deal better than most thanks to their light hearted nature, behind the scenes footage and presentation.

"Interviews and Profiles" offers a 6-minute interview with Bruce Willis and 4 minutes with the baddies of the film. The interviews are excised material from the featurettes.

There are seven "Visual Effects Sequences" of varying lengths. They offer split screen breakdowns of the visual effects scenes.

"Behind The Scenes and Storyboards" offer 3 Behind the scenes clips; "Terror in the Subway (9 minutes)", "Prepping the Park (10 minutes)" and "Blowing Up Bonwit (7 minutes". These are strictly behind the scenes B-roll footage and are a great deal better for it. They show a great deal of how such scenes are filmed. We also see McTiernan at work. Great stuff. There are 2 minutes of "Storyboards" also present.

Rounding of the disc are two trailers and an alternate ending with commentary. This ending is listed under "Commentary" on the main menu.

Overall: Significantly better than "Die Hard 2", "With A Vengeance" benefits from a cracking premise, great chemistry and banter between Willis and Jackson and McTiernan's tight, assured direction. I have seen the film many times and it is constantly enjoyable and thrilling. However I do agree with the sentiments on the commentary that the film loses its way once the games end and we go into standard action territory. The DVD is very good, with fine presentation and extras. One thing to note is that when I put the DVD into my computer, the DVD-ROM reads it as "Die Hard Censored". I sincerely hope not.
posted by directorscutIMDb on 22/4/2003 22:26