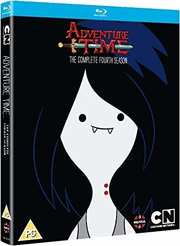 I’m facing the reverse problem with Adventure Time now that I’ve reached the midway point in review discs. Manga Entertainment have released the first five seasons of the show across six discs (Season 5 is double length), and for a show that I was initially lukewarm on, it took me three of those discs to click with the show, really start to get what it’s all about, and what its sense of humour is. By the end of season 3, I was loving the show. Now, I can only hope that love sustains, and doesn’t tail off, as I embark on season 4. 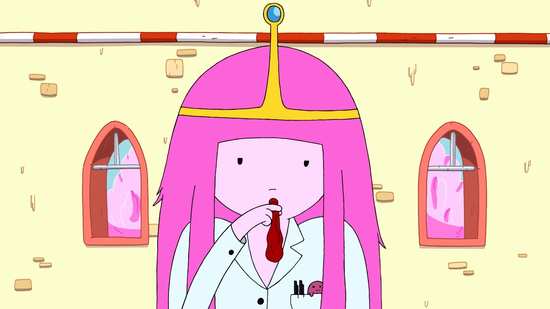 Finn is a human boy, and Jake is his best friend, a shape-shifting dog. Together they have lots of adventures in the magical post-apocalyptic land of Ooo, with friends like Princess Bubblegum of the Candy Kingdom, Lumpy Space Princess of Lumpy Space, The Flame Princess, Marceline the Vampire Teen, and Lady Rainicorn, all while dodging danger from the Ice King, the Lich, the Mega Frog, and Lemongrab.

There are 26 episodes on this Season 4 Blu-ray disc from Manga Entertainment. 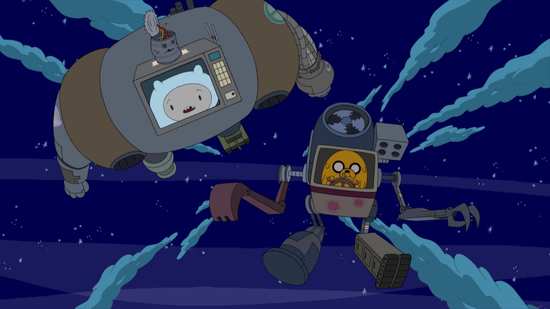 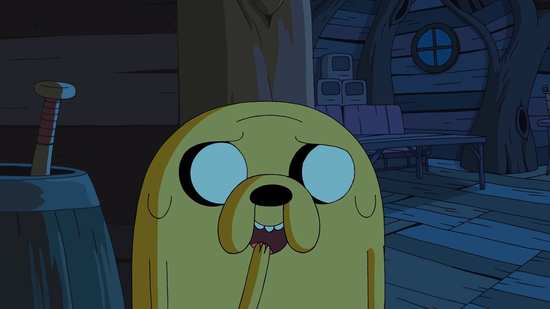 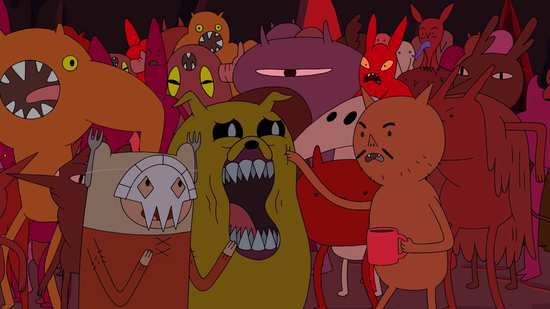 There are commentaries for all 26 episodes with the production staff.

Distant Bands: The Music of Adventure Time lasts 19:38, and the clue to the featurette’s content is in the title. 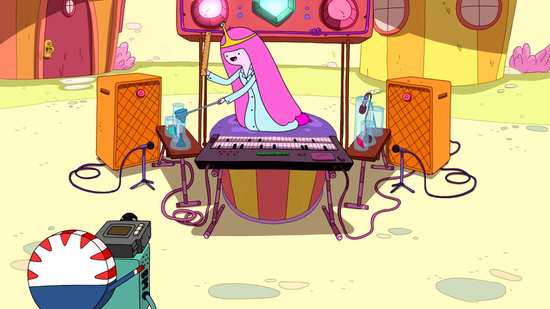 It turns out that too much of a good thing; even Adventure Time can begin to get tedious. Four seasons in close succession is my limit, and I think I’ll give it a little time before I try reviewing Season 5. That’s despite Season 4 ending on the kind of cliff-hanger that makes you want to dive straight in. For all its lack of routine and predictability, it turns out that the relatively stand-alone pure adventure episodes of Adventure Time have a formulaic pattern. This gives the show a familiarity that had my attention starting to drift. Jake and Finn go on an adventure, things will be quirky and offbeat, there may be a song, and the story will end in a way that would be opposed to the direction of narrative travel, eschewing the usual tropes and clichés. Do that with enough regularity, and it becomes predictable in and of itself. Another trivial thing that gets overdone by this fourth season is the fart gag. Farts can be funny, but when they become as constant as they do in this series, they just become background noise. 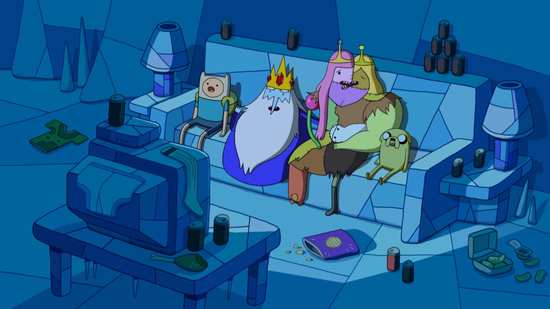 What redeems Adventure Time, and makes me want to stick with the show is the continuity. The episodes establish and build on a fantastic world, filled with interesting characters. The Land of Ooo has a fascinating, post apocalyptic back-story, and I always look forward to pieces being filled in, as well as established characters being revisited. Season 3 might have begun with the prospect of romance between Finn and Princess Bubblegum, but that didn’t pan out. At the end of that season, it looked as if Finn had another chance at love with Princess Flame of the Fire Kingdom. Courtship is hard with a girl who sets fire to everything merely by existing, and it turns out that there are real reasons why a relationship is ill advised. It also turns out that the Candy Kingdom isn’t a place for public displays of affection, when Tree Trunks falls in love with Mr Pig. 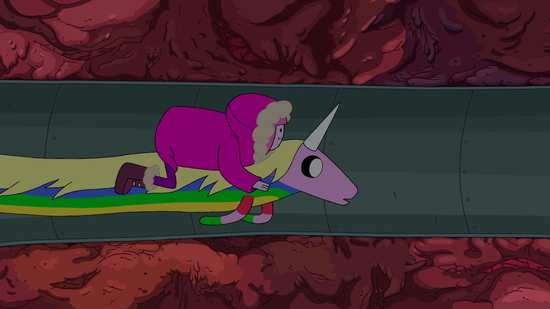 I think my favourite character is the teenage vampire Marceline, and she gets a two part story when Jake and Finn wind up back in the Nightosphere, having to deal with Marceline’s dad. Then we also learn of Marceline’s shared past with the Ice King, before he became the Ice King, following on from a Season 3 episode. Of course the season conclusion features the return of this world’s ultimate villain, the Lich, leading to that tantalising cliff-hanger I mentioned earlier. 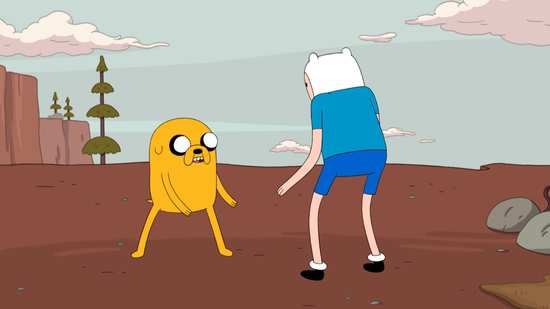 The shine fades a little from Adventure Time in Season 4, the new car smell isn’t there anymore, but the show has found its niche, and is happily doing its own thing. I think it would be advisable not to watch the episodes at a reviewer’s pace, and instead space them out a little, make them more of a treat, as that is really what this show is.