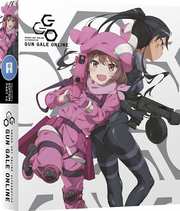 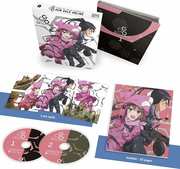 If you go through my reviews for the Sword Art Online franchise, it will quickly become clear that I’m not a fan. My initial dislike was spurred by my anathema to the ‘plugging into a virtual world’ genre, one that didn’t make much logical sense, and one that seemed redundant. Why make a show where kids in a future world have adventures in a virtual RPG? Why not just make a fantasy show? It was this that steered me clear of the .hack shows in the first place. But with repeated exposure I’ve come to appreciate the VR anime genre. Sword Art Online is one of the more colourful and imaginative of the choices out there, but its story got nasty and exploitative at times, and it did ill by its characters. I won’t forgive it for Asuna in Fairy Dance. It’s picked things up a little in Season 2 and the spin-off movie, and the one aspect of Season 2 that I did like was Gun Gale Online. I like Westerns, I prefer shoot-em-ups to sword play, and the game of Gun Gale Online looked the most fun of all of the online worlds presented in SAO. You can bet that I perked up when I heard that there would be a Gun Gale Online spin-off show. And now it’s here, or at least the first part of it, courtesy of All the Anime. And yes, Aniplex show, overpriced, high disc counts, low episode counts, etc, etc. 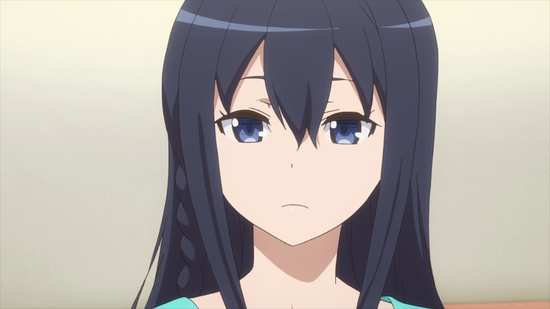 Karen Kohiruimaki has a complex about her height. She’s six foot tall in a country where the average height is a lot lower, so she’s introverted, shy, and self-conscious. Naturally she’s a loner, and moving to Tokyo to go to college in a big metropolitan city has made no difference. Returning home to Hokkaido for a visit, and talking to her friend Miyu, she learns about the virtual MMORPG craze, taking off again after the Sword Art Online tragedy, with the new safer Amusphere technology. She can be who she wants to be online; she can be normal. 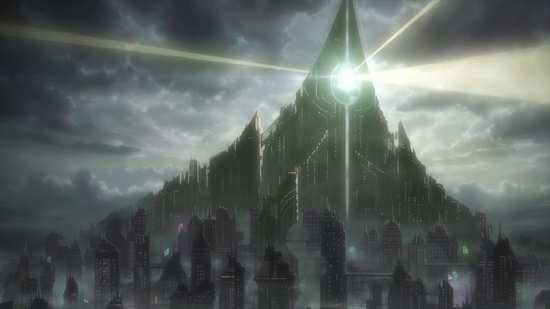 The first game she tries is Alfheim Online, and the random avatar generator makes her a tall, elegant elf... 37 games later, and she finally gets a cute, short avatar that she names Llenn. It’s only then that she stops to take a look at the game she’s playing. This pixie-like button of a character will have to be a hardnosed gunslinger in Gun Gale Online. It’s time to go to boot camp. 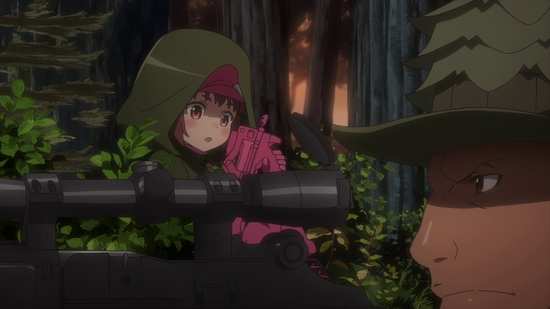 The first six episodes of Sword Art Online Alternative: Gun Gale Online are presented across two discs from All the Anime. 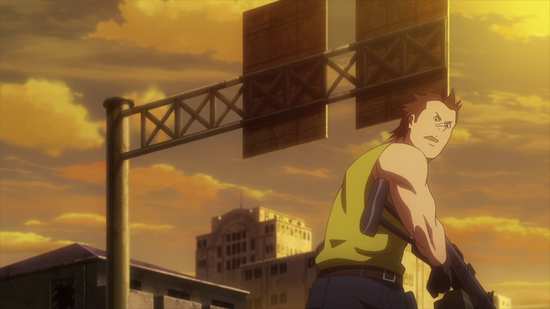 Gun Gale Online gets a 1.78:1 widescreen 1080p transfer, and it’s on a par with the mainstream SAO series. The character designs are appealing, the world design is intricate, and the animation is fluid and energetic. There is a smidge of banding in a couple of scenes, but nothing too overwhelming. Of course with just 3 episodes on a disc, you shouldn’t really expect issues with compression and the like. 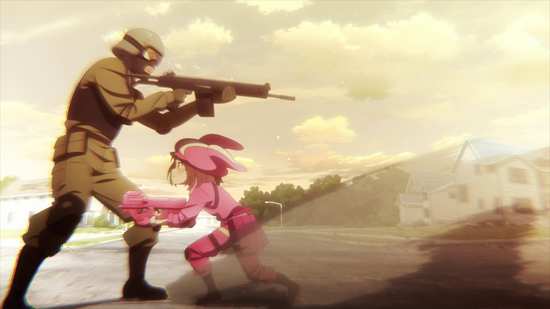 You have the choice between PCM 2.0 Stereo English and Japanese with subtitles and signs. I went with the Japanese and was very happy with it. The actors are suited to the characters, the action comes across with impact and the stereo gives it enough space to feel immersive. The music also suits the story well. The subtitles are accurately timed, although there are no translations for the theme songs. There is one translation at 50:54 into disc 1 that doesn’t quite make sense. The sentence would make sense if “has” would be changed to “hasn’t” but the sentence wouldn’t work in context with the scene. 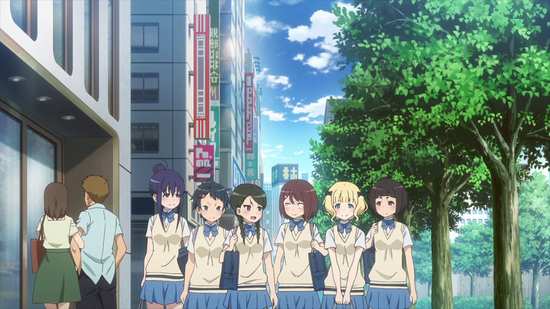 The discs present their content with animated menus, and it’s here that I came up against a problem. The menu options and text are corrupted when played back on both of my Panasonic Blu-ray players (the pop-up menu during playback is fine). Trying it on VLC on my laptop, the menu bar refused to load at all. This is probably one of those incompatibility things.

Disc 1 offers the textless credits, and there is a Japanese commentary on episode 1 with Tomori Kusunoki (Llenn), Kazuyuki Okitsu (M), and the author Keiichi Sigsawa. 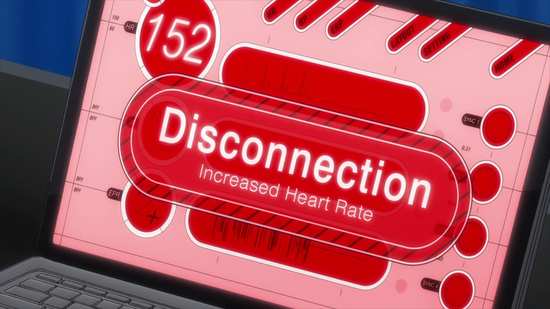 There is an audio commentary on episode 4 with Tomori Kusunoki, Kazuyuki Okitsu and Yoko Hikasa (Pitohui).

Then there is the commentary on episode 5 with Tomori Kusunoki, Kazuyuki Okitsu, and Ayaka Asai (Eva). 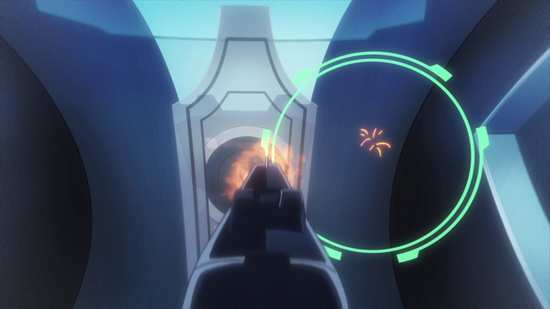 This is one title where the release format could have done the show harm in a pre-streaming age. Of the six episodes here, five are really prologue, introducing the characters and setting the scene, while the sixth episode really introduces the problem the characters have to face, sets into motion the real narrative of the story although doesn’t really pick up momentum in this collection of episodes. You’ll have to look forward to the second half of the series for that. Without episode 6, I would have categorised Gun Gale Online as a slice-of-life show with copious gunplay. 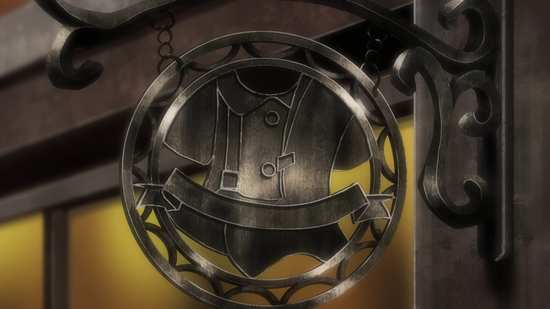 While this show does spin-off from Sword Art Online, it keeps its forebear at a distance, with none of the characters crossing over. At first the only point of congruence is the Gun Gale Online game itself, although the Squad Jam team battle royale tournament is described as a consequence of Kirito’s battle in Bullet of Bullets in the GGO arc, where he briefly teamed up with Sinon. People like the idea of a team tournament so much that Squad Jam was subsequently added to the game, and it’s here we pick up the story. Later on, towards the end of this collection, the original Sword Art Online incident is referenced, and becomes the motivation for one of the characters, no doubt leading to the second half of the series. But other than that, Sword Art Online Alternative: Gun Gale Online stands alone. 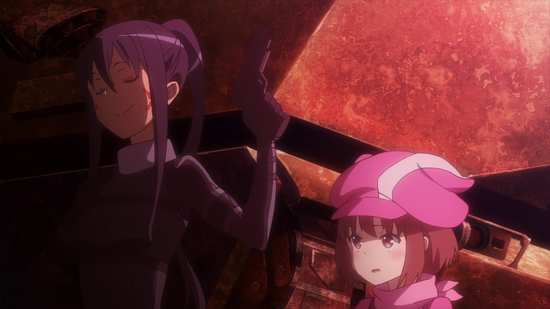 The story follows Karen Kohiruimaki, who has a complex about her height, and decides the way to handle it, is to get a short, virtual reality avatar. The first game that grants her wish is Gun Gale Online, and so Llenn is born. She’s an unlikely character for the shoot-em-up, and to enhance her cuteness, she picks a pink outfit and sprays her gun pink as well. Fortunately for her stats, there is one environment where pink is good camouflage, and while she starts off monster hunting, she manages to bag a few rival players as well. 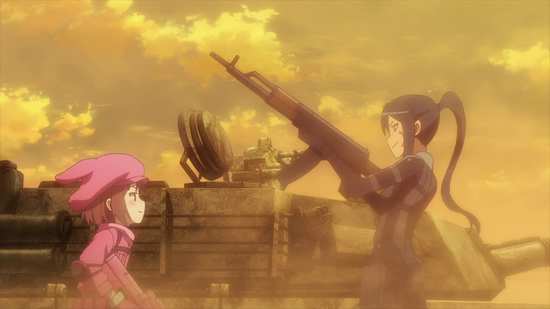 That gets the attention of Pitohui, a tough character who takes a shine to the cute little player. They become friends, and Pito helps her to understand the intricacies of the game. It’s her idea that Llenn take part in Squad Jam, although for some reason, she can’t team up with Llenn herself. Instead she gets ‘M’ to take part, and he turns out to be quite the survivalist, coming up with useful tactics and sneaky plans, although his communication skills aren’t too hot. 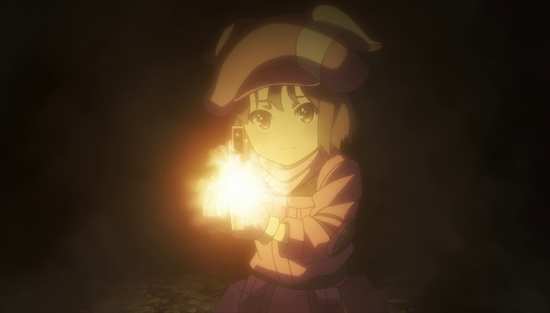 The first five episodes really cover the first Squad Jam tournament, seeing Llenn and M teamed up against around 30 teams in a gun fighting free for all. It’s a whole lot of fun to enjoy the characters and their development. As I previously mentioned, there’s not a lot of narrative at this point, and it really does feel more like a slice-of life show, as the duo face various teams who increase in terms of challenge. The last two teams standing come down to them and a group of Amazons, statuesque women in combat fatigues who fight like warriors; and circumstances boil down to these warriors versus this fast-moving, cute button, all in pink. 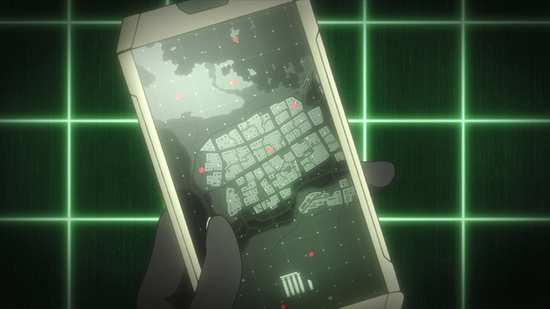 The sixth episode returns to the real world for an interlude before the next Squad Jam tournament. And we get to see the growth in Karen’s character, as she seems to be becoming more comfortable in her own skin. This is reinforced when she meets the Amazons in the real world, and they all turn out to be a universally short, middle school gymnastic team. It turns out that they had the reverse complex. But the second half of the show is presaged with M and his relationship with Pitohui. It’s played for laughs at first, this apparently skilled soldier petrified of the little girl with a bad attitude, but when that fear manifests in the real world, it becomes clear that there is a lot more going on with Pitohui than is visible on the surface; when M talks about fearing for their lives (M and Pitohui’s) it’s not just hyperbole, and that it all links back to the original Sword Art Online incident. 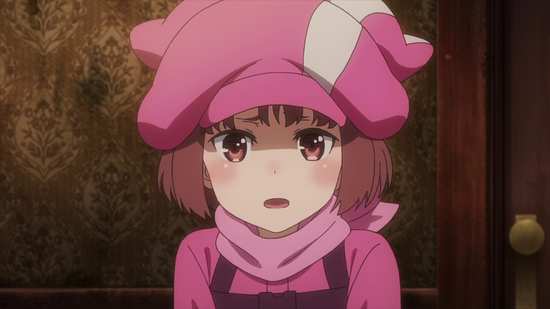 This sets up the second half of the series, which will no doubt take place online again, in the next Squad Jam tournament, where the stakes will be far higher than just a player’s reputation. I’m certainly looking forward to the second half of Gun Gale Online at this point. There is that small issue with the menus and player incompatibility with this release, but everything else on the discs works as it should.