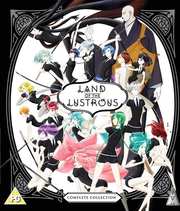 Review for Land Of The Lustrous Collection

If there is one thing that animation can do that live action can’t, it’s to really take flights of fancy with concepts and premises. With anime’s Japanese origin, offering perspectives separate from Hollywood and Western entertainment, you can get really far out ideas in anime. I’ve seen some pretty bizarre stories make for really successful anime. Just recently, I reviewed a show about anthropomorphised famous swords sent back in time to keep history on track. I’ve seen a show about goddesses shrunk down to minuscule size so they can spend their days goofing off with a rat, a show in a world where the dead turn into books chronicling their lives, a show where a boy died and got reincarnated as a dog to live with his favourite author, a show where another boy died, and got to timeshare in the body of an alien girl, a show with a cursed family that turn into the animals of the zodiac when hugged by someone of the opposite sex... You can see that anime can get pretty far out, and I’ve seen a lot. I don’t think I’ve seen any premise as far out as Land of the Lustrous. 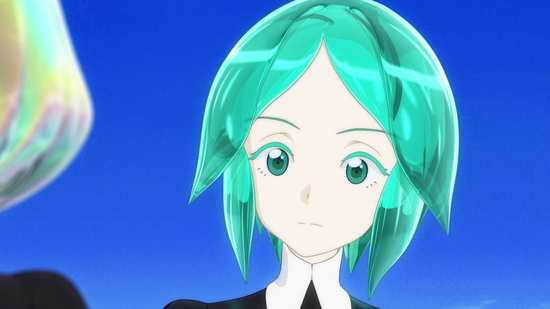 The world has just 28 people in it, the Gems and their sensei Kongo. Although they look like girls, the Gems are actually crystals, precious and semi-precious jewels in human form. The Gems are practically immortal, and should they suffer a fracture in their crystalline form, the fragments can simply be reformed. The problem they have comes in the form of the Lunarians, who seek to possess the Gems and turn them into jewellery. Life is then a constant fight for survival. That isn’t quite so for Phosphophyllite, who Kongo-sensei deems too fragile and far too clumsy to battle the Lunarians. Instead, he has a different mission for her, to compile an encyclopaedia of the world. Phos is reluctant at first, but what she learns might change their lives forever. 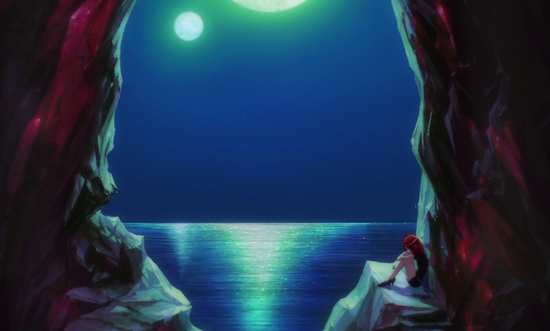 12 episodes of Land of the Lustrous are presented across 2 discs from MVM as follows. 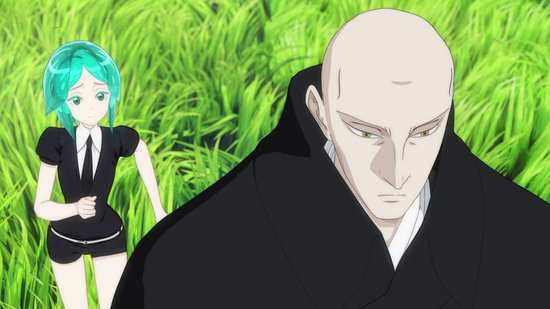 Land of the Lustrous gets a 1.78:1 widescreen 1080p transfer. It’s another fine transfer of an anime via Sentai Filmworks, clear and sharp with smooth animation and strong colours. Of course Land of the Lustrous isn’t exactly a traditional 2D animation, more of a 2½D one in the same vein as Knights of Sidonia and Ajin, where the characters are created as 3D models, and animated in the modern CG style while retaining something of a flat look. Given the fantastic storyline, the wondrous character designs, this is one show where the CG animated look works perfectly, and you’re never thrown out of the experience where something doesn’t look anime enough. 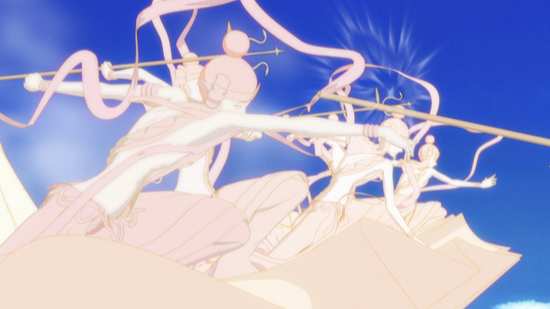 Just like Knights of Sidonia and Ajin when released by Sentai, Land of the Lustrous gets more than the usual audio options. You have the choice between DTS-HD MA 2.0 Stereo English (with English signs), Spanish (with Spanish signs), or Japanese (either with English subtitles or Spanish subtitles), all locked during playback. I went with and was happy with the Japanese audio. The dialogue is clear throughout, the action comes across with suitable impact, and the music drives the emotion of the story as required. The subtitles are accurately timed and free of typos. 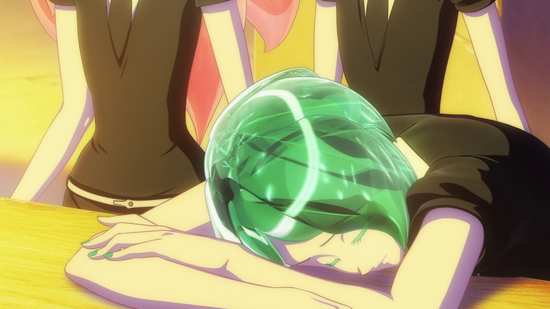 The discs present their contents with static menus, and each episode is followed by a translated English credit scroll.

On disc 2 you’ll find the textless credits and trailers for Girls Last Tour, Made in Abyss, Princess Tutu, and Princess Principal. 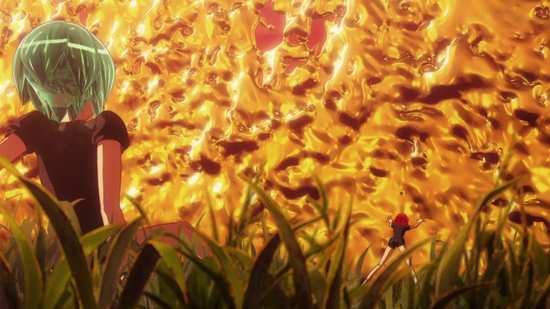 On the face of it, Land of the Lustrous seems remarkably familiar. Stop me if you’ve heard this before. Villains on the moon send a new monster to attack the Earth on an episodic basis, and the heroes of different colours have to work together to defeat them. That’s the plot of every sentai show that’s played on Saturday morning TV. But this is just a passing similarity, and Land of the Lustrous does things completely differently, not least of which there are no giant robots joining into even giant-er robots. 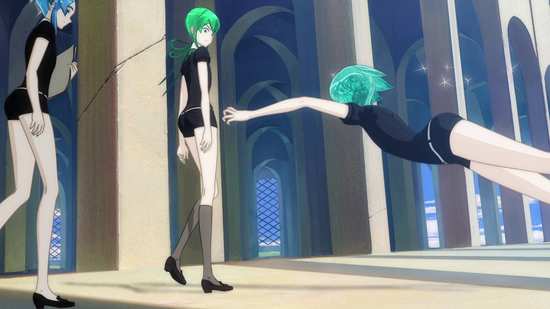 The big draw to this show is the world-building. It paints a picture of a fascinating world, where just a handful of people live, and an odd cycle of life now exists. The people are all Gems, literally crystalline structures given human form and personalities. They consist of a couple dozen girls and their sensei, a priest looking fellow who serves as their leader. They are literally named after their crystals, so we have characters like Diamond, Bort, Cinnabar, Amethyst and of course the protagonist, Phosphophyllite, a.k.a. Phos. 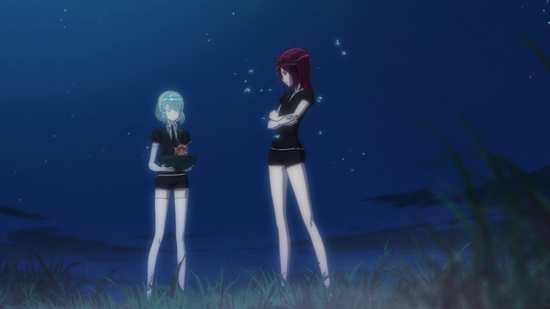 This state of affairs began aeons ago, when 6 new moons appeared in the sky, and all life on land fled to the oceans. Subsequently, it was only the Gems that returned to the surface where they still live. The problem for the Gems comes from the Lunarians, strange beings from the moon that appear through black rifts in the sky (they seem a lot like the villains in Noein) and they try and take the gems. The Gems are immortal, but once broken, they have to be reassembled before they are conscious again. So they fight against the Lunarians to protect themselves, and to retrieve the Gems that have previously been lost. 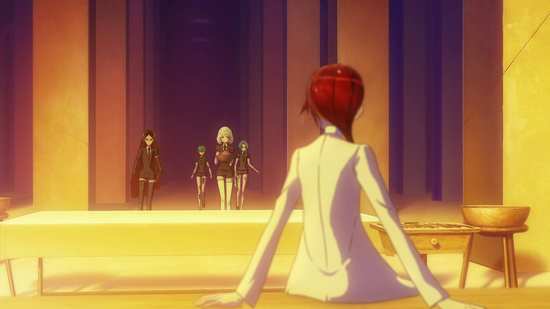 When we meet Phos, she’s the youngest of the Gems, barely 300 years old, constantly pestering Kongo-sensei to let her fight with the others, but hampered by her own flightiness and clumsiness; and the fact that she’s one of the softer and more brittle crystals among the group. Kongo instead assigns her the task of assembling a natural history encyclopaedia. This is ostensibly to get her out of everyone’s hair, but it has the added effect of putting her on a mission to learn about her world, which saves us as viewers from the pain of obvious exposition; we learn alongside her, reluctant student though she may be. 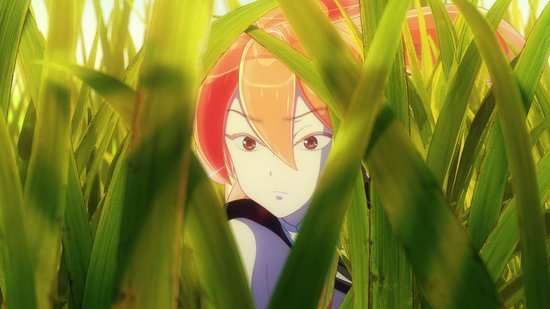 That changes when she meets Cinnabar. Cinnabar is a loner among the Gems, nocturnal unlike the others, when Lunarians never attack, and avoiding contact. The reason is obvious, as she exudes mercury, a contaminant that has to be chipped off the other Gems. If a Gem loses a part of their body, they lose memories, and that is to be avoided at all costs. Seeing the solitary figure of Cinnabar, Phos promises to find her a more fun job to do rather than the late night shifts. 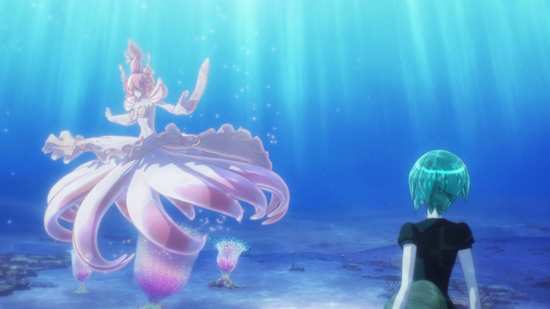 It’s in this endeavour that Phos gets into a whole lot of trouble, where she learns more about the world than she ever expected, and goes through some drastic changes. That is one of the strongest aspects of Land of the Lustrous, the development of the Phos character, who at the end of the series is practically unrecognisable from the flighty girl that we meet at the beginning. The change in her character is totally justified by her experiences though. 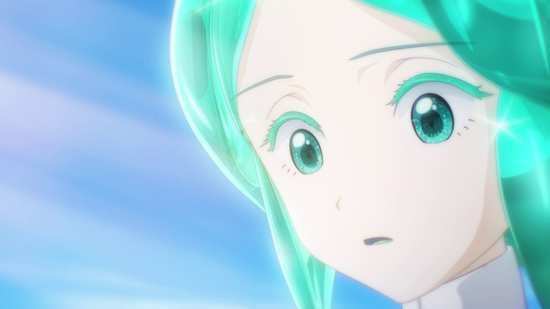 The other impressive thing is just how internally consistent the show is. The girls may have the usual female anime character tropes in their personalities, but the story follows the rules it sets out with charming accuracy. It’s as if it’s been written by geological scientists. The eye-catches to each episode will detail a particular crystal, its chemical formula and lattice structure, as well as its hardness. The characters all react as their crystals would in the real world, prone to the same chemical and mechanical processes, with the vulnerabilities and strengths that result. So Antarcticite only appears in the show in the winter when the temperature drops far enough. 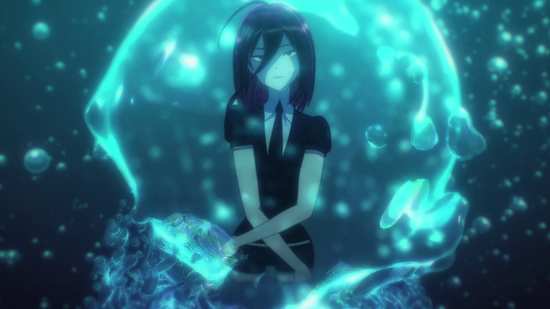 The problem with Land of the Lustrous is one common to many anime, but always the most disappointing in the best series. It’s open ended and it’s unsatisfying. This is a show with an elaborate and unique worldview, one that asks many questions regarding how it works and how it came about. There are also questions about where certain characters fit in. While the show fills in the gaps regarding how the world is structured, it’s less fulfilling when it comes to the history of this world. It constantly tantalises, but never delivers, and like so many others, promises to do so in Season 2 in the hope that Season 2 will be commissioned. That hasn’t happened as yet.