The clocks went back an hour this weekend, which is good given the number of geek culture fanatics that need that extra hour to get over their post MCM Comicon hangovers. It was that time of the year when the great and the good in the anime sphere gathered to talk shop, show-off, sell some stuff, and announce their new licenses. Only this year felt a little deflated compared to other years. Part of that has come down to the format changes that have happened in recent events, the all-industry panels have gone, Manga no longer announce new titles at the event, MVM just tweet, and only Anime Limited have a panel. Most of it comes down to a lack of Funimation this time. Anime for the English speaking world tends to originate in the US, where Sentai and Funimation have the lions’s share of titles split between them, and what’s left over going to everyone else like Aniplex US, Discotek, Pony Canyon, and Right Stuf. In recent years, Funimation have released titles in the UK through All the Anime, Universal, and on their own label. They’ve also teamed up with Crunchyroll for streaming and physical distribution. But in recent weeks, Funimation have been bought out by Sony, and you can bet that their attention is on signing contracts and figuring out how things will work going forward. So there was nothing new from Funimation, Universal, Sony, or Crunchyroll this weekend. And the bleakness didn’t stop there.

Anime Limited/All the Anime had two panels this weekend, and at the first they announced two cancellations. They no longer have the rights to release Sound Euphonium or Showa Genroku Rakugo Shinju. Some anime fans mislaid their happy faces at that news.

But, Anime Limited are diversifying. They’re bringing the Attack on Titan: The Last Stand board game to the UK (indeed they had a few at MCM). They are also getting into anime soundtracks, releasing the Your Name soundtrack on CD and Vinyl, and Trigun and Trigun Badlands Rumble soundtracks on Vinyl next year. Vinyl sounds an intriguing direction, especially as anecdotally, most modern Vinyl collectors don’t even have record players; they buy the things for the sleeve art, and listen to the digital copies that come with the record. It will be intriguing to see if Anime Limited get the digital rights to the soundtracks as well, something that Japanese companies are loath to do. Incidentally, one of the surprising developments around that Funimation Sony deal is that Sony will provide the infrastructure to allow Funimation to start bundling digital copies of anime with their discs, but I digress.

Anyway, let’s get to the point of this article, the list of new anime licences, and this year it was MVM with the biggest list of new stuff.

That’s just the raw data. You can get more detail on sites like Anime UK News, UK Anime Network and Anime News Network. 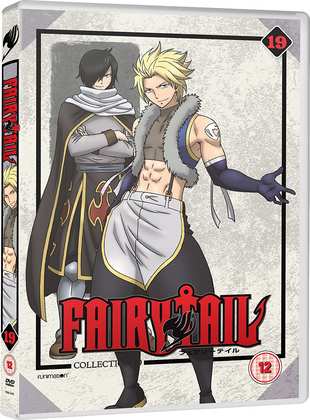 Three new anime reviews for you last week, beginning with Fairy Tail: Part 19. It gets kind of hard to come up with something new to say when we get Fairy Tail volumes on a monthly basis. This is the second collection of filler material in a row, although last time it looked that we were getting watchable filler for a change. That’s only true up to a point in Fairy Tail Part 19, after which normal filler resumes. Click on the review to read more of my blather. 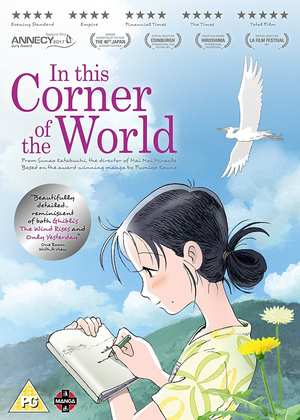 I can stop blathering when it comes to In This Corner of the World, a meaningful and engaging World War II drama from the point of view of a girl from Hiroshima. It’s set towards the end of the war, as she gets married, and movies to a navy town to be with her new husband and his family, and looks at the hardships they face, as well as the moments of joy that they find. The tragedies and triumphs that occur will be familiar to anyone who’s read about the Blitz, and an indication that regardless of nationality or allegiance, some experiences are truly common. 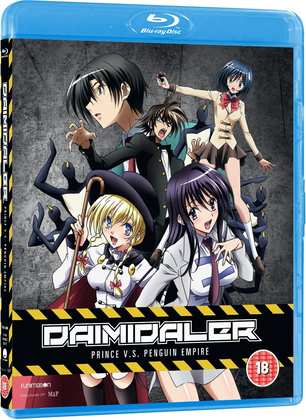 From the sublime to the ridiculous, as I rounded off the week with a look at Daimidaler: Prince vs. Penguin Empire. As you can read in the review, I picked the wrong week to watch this particular title. It’s a giant robot title, where the hero pilot of the good guys’ robot gets powered up by molesting his buxom female co-pilot. What in normal times would have been a disposable saucy anime comedy of the week, now seems crass and out of touch. For once I’m glad that I couldn’t screen shot it. 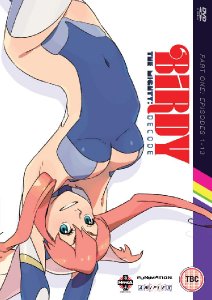 Birdy: The Mighty Decode. Stop what you’re doing, go to an e-tailer website, and place an order. Not that Birdy: The Mighty Decode is the best anime ever, although it is mighty fine; it’s just that it’s an Aniplex US show, and in the US they’ve taken the license back from Funimation and are sitting on it for the rest of eternity. Once any extant copies are sold, that’s it, it’s gone forever. Right now Manga Entertainment’s 2011 UK DVD releases are still affordable, so get it while it’s still there to get. Here’s the end theme for the show that you can’t see in full screen on the discs because of Funimation’s authoring.

Birdy The Mighty Decode is a great, quirky little sci-fi show, made all the quirkier as it’s directed by Kazuki Akane of Escaflowne and Noein fame. An alien investigator named Birdy comes to Earth to track down a fugitive criminal, and in the hunt accidentally kills an innocent bystander, a schoolboy named Tsutomu. Fortunately alien technology is far more advanced than ours, and her superiors allow Tsutomu’s body to be repaired. But while that happens, Birdy has to host Tsutomu’s consciousness, swapping bodies whenever one or the other is in control. And all the while she has to continue her investigation on Earth, which only gets more complicated as the conspiracies grow. Here’s my review of Part 1, and once again, buy it while you still can!

Funimation released Daimidaler: Prince vs. Penguin Empire on Blu-ray back at the end of July, while their Fairy Tail Part 19 DVD comes out today. Manga Entertainment released In This Corner of the World on DVD, on BD/DVD combo, and on Collector’s Edition BD (with added extras) last Monday.