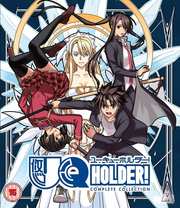 I’ve gotten to that point where I’ve watched enough anime to get nostalgic about it. I never thought that would happen, but after a couple of decades, I start looking back fondly of the anime from my twenties, pine for anime how it used to be, that looks fantastic through rose-tinted spectacles, and against which modern anime pales in comparison. When I placed the first disc of this collection into the player, and was regaled with the tuneful strains of ‘Happy Material’ playing over the menu screen, I decided then and there that I would like this show, without even having seen it. Happy Material was also the theme song for the first Negima series, which I watched and reviewed over ten years ago, back when I was still a fan of the harem comedy genre, and held Love Hina as its epitome. Hearing Happy Material again as the theme song for this show gave me a warm glowing feeling. 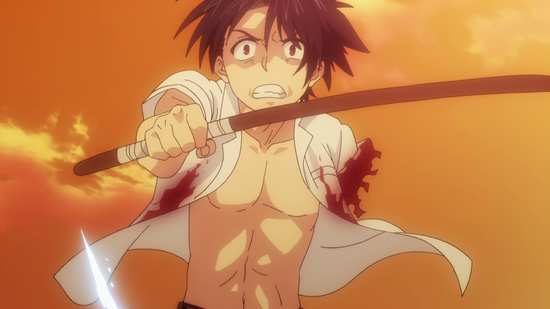 UQ Holder comes from the pen of Ken Akamatsu, the master of the harem, the man behind Love Hina. He also created the phenomenally successful Negima manga series, and this is his most recent offering, UQ Holder, ostensibly a sequel to Negima. I say ostensibly, as anime never treated the Negima adaptation well. The first series from Xebec stripped much of the narrative out of the show, and instead concentrated on the harem comedy possibilities of a ten year old school teacher (and wizard) and a class full of teenage girls; a Love Hina squared so to speak. Studio SHAFT then had a second chance to adapt the story, and they dumped it completely to instead deliver 26 episodes of Akiyuki Simbo (Monogatari) weirdness. Chupacabras for the win! So while UQ Holder might be the sequel to Negima the manga, subtitled Magister Negi Magi 2, it’s not going to have any continuity with the anime we’ve seen here thus far. On top of that, given the length of the manga (19 volumes), and the length of the anime (12 episodes), it’s a fair assumption that either the anime gives just a taste of the manga before stopping, or it too does its own thing. 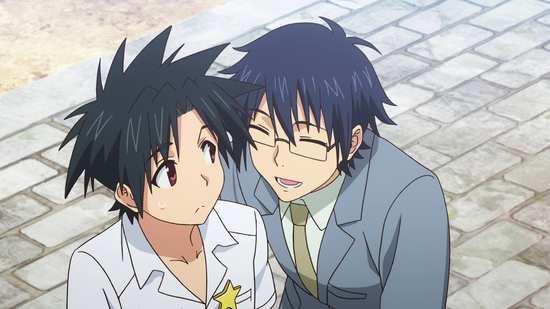 It’s been some eighty years since the events of Negima, and the world is a markedly different place. The knowledge of magic became widespread and commonplace some ten years previously, so much so that even the non-magically inclined can buy and use magical apps. Not that this matters much to our protagonist, Tota Konoe, who lives a quiet life in a village, dreaming of one day going to the capital city and climbing the orbital elevator. 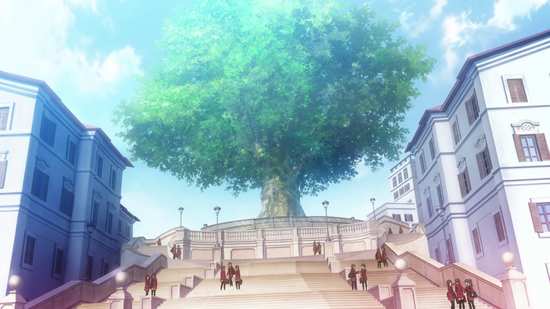 But Tota has a history. His parents were killed in a traffic accident, and since then he’s been raised by his school teacher Yukihime. And despite the fact that he has no magical talent, his grandfather was none other than Negi Springfield. His life changes when immortal hunters attack him and his friends; for Yukihime is none other than the immortal vampire Evangeline A.K. McDowell, and to save Tota’s life, she has no choice than to turn him into an immortal vampire as well. Together they head to the city, and along the way they pick up another immortal named Kuromaru, for Yukihime has invited them to join the immortal UQ Holder group. 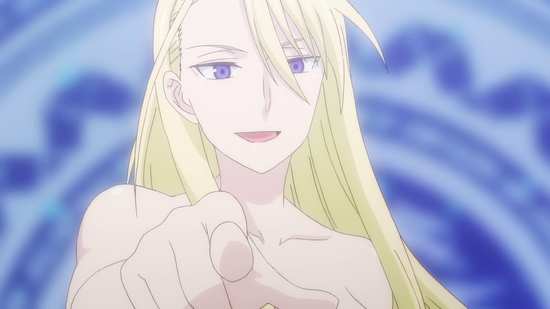 12 episodes of UQ Holder, plus three OVA episodes are presented on these Blu-ray discs from MVM.

Disc 1
1. Beauty and the Boy
2. You Can’t Hate Someone You Meet Naked
3. Palace of the Immortals
4. Invasion of the Assassins
5. Dark Magic (Magia Erebea)
6. The Troubles of Kuromaru
7. Reset and Restart
8. Operation: Capture Fate
9. Love, Baths, and Vigorous Exercise 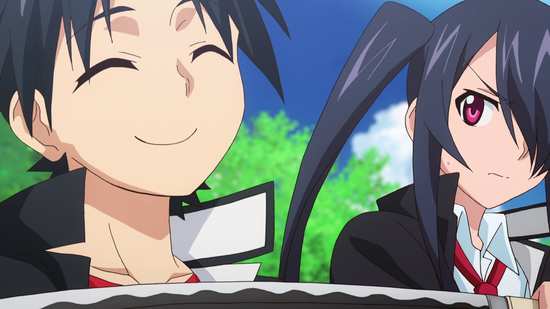 UQ Holder gets a 1.78:1 widescreen 1080p transfer on these Sentai sourced discs. The simple character designs, the bright and uncomplicated world design is never going to challenge the limits of the Blu-ray format, and neither is the animation that never does more than it needs to. In terms of animation quality, while the resolution, colour palette and consistency is equal to that of modern productions, the show itself hasn’t moved on all that much from its forebears Love Hina and Negima. You won’t be nitpicking compression or banding on this one. 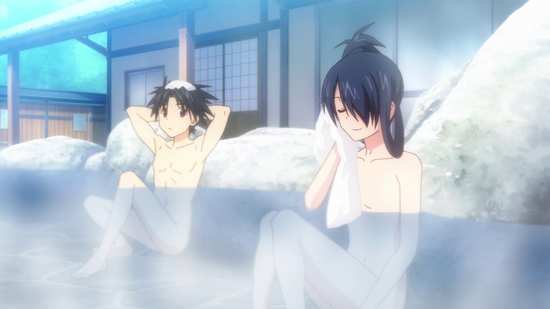 You have the choice between DTS-HD MA 2.0 Stereo English and Japanese with subtitles and signs locked during playback. About the most notable thing that I found with this series was the reuse of the Negima! theme tunes, both the Happy Material opening for the series, and some of the closing themes for the OVA episodes. Otherwise it’s a fair enough audio experience, the stereo bringing the action and effects across well enough, and the actors suited to their roles. I was happy with the Japanese, and the subtitles were accurately timed and free of typos. I didn’t try the dub for this review. 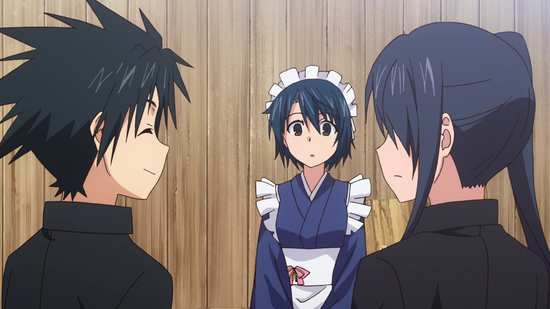 The discs present their content with static menus, and each episode is followed by a translated credit reel.

The extras on disc 2 comprise the textless credits, including the three textless endings for the OVA episodes. There also 1:55 of Japanese promos for the show. 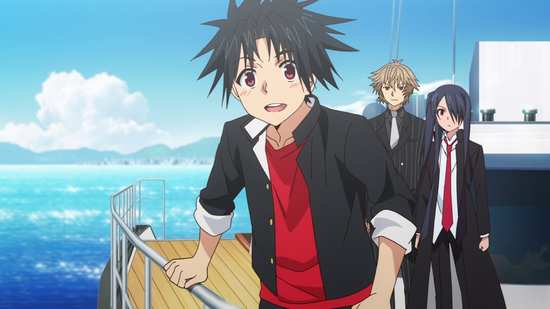 Nostalgia really can only take you so far. I love Love Hina; for me it’s the quintessential harem rom-com, most probably because it was the first of that over-subscribed genre that I watched, and while others justifiably think little of it today, for me it can do no wrong. I love the original Negima! series as it offered more of the same, back when I was looking for more of the same, although Akiyuki Simbo’s take on Negima left me cold. It was only when I saw the Negima manga, that I realised that all of the story had been left on the cutting room floor. But that is as far as nostalgia takes me. It was some time after that I saw Akamatsu’s Itsudatte my Santa, and it stank, not to put too fine a point on it. 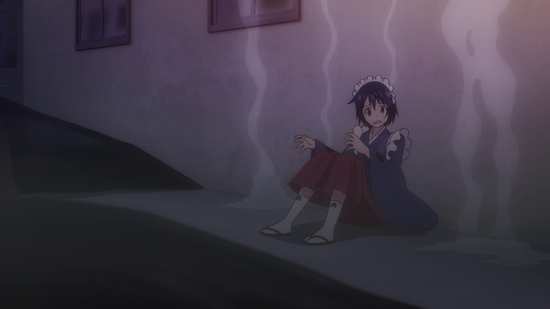 UQ Holder is one more bite at the harem comedy genre, and it’s done in exactly the same vein as Love Hina and Negima. That’s a comedy style that has passed us by. It’s funny when revisiting an old show, but in a new show, it’s just out of date. It’s as if someone did a Laurel and Hardy routine today, in 3D IMAX with Dolby Atmos. It only works in context, which means black and white, and crackly film. Akamatsu’s schtick is to have a milquetoast male protagonist accidentally fall over into a cute girl’s cleavage, in which case she’ll respond by upper-cutting him into orbit. Think Naru and Motoko in Love Hina, and Asuna in Negima. UQ Holder is about a group of immortals. Now when Tota inadvertently and extensively gropes someone, he can literally be killed, and then come back to life to do it all over again. This is as far as you can take that particular trope. 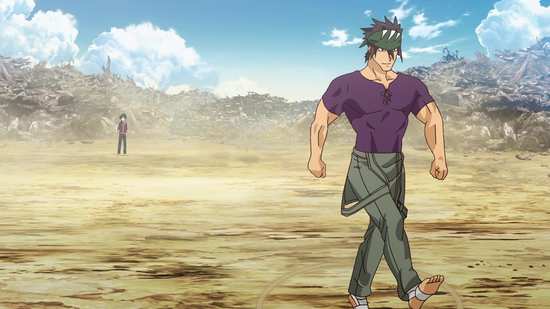 What’s different this time around is that we get story as well as the usual rom-com mayhem, and apparently none other than Ken Akamatsu himself has helped adapt the manga to the anime medium. The problem here is that there are just 12 episodes to the run, and he tries to get as much of the narrative in as possible. Adapting something like 10 manga volumes into that much space just isn’t possible without leaving a lot of stuff out, and not bothering with pesky things like character development, and narrative progression. It really does feel like a highlights package at times. 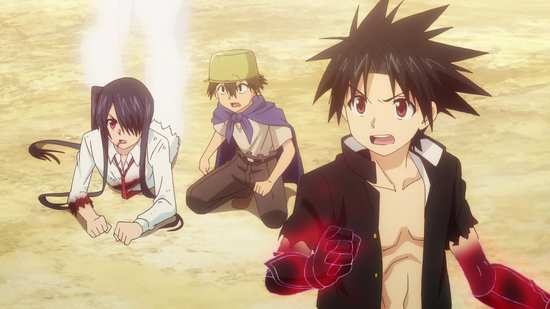 Another problem is the inability to let go of Negima. UQ Holder is a sequel set 80 years down the line, and with Yukihime the ‘adult’ form of eternal vampire Evangeline A.K. McDowell, that ought to be enough to be going on with. But there are plenty of flashbacks to those days with class 3-C and Negi Springfield, and then characters from Negima start showing up. Okay, Ayaka’s a great grandmother now, and she’s really there to introduce her descendant Mizore, the last recruit to Tota’s harem. But then you start seeing more and more of the characters from Negima, and the show’s climax revolves around Negi Springfield’s fate. It ends with a cake and eat it moment that sees the whole of class 3-C make cameos. It’s like the final episode of Enterprise, where Captain Archer and his crew wound as guest stars on an episode of Star Trek The Next Generation. It doesn’t leave a good taste in the mouth. 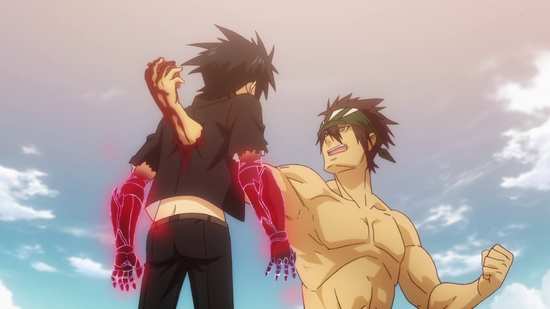 So in between the breakneck pace of the story and the constant references to Negima, UQ Holder follows Negi’s grandson Tota on his journey from school-kid to immortal warrior. He’s been raised for the past two years by Yukihime, following a car accident that erased his memory. When immortal hunters come looking for Yukihime, Tota gets caught in the middle, and the only way to save his life is to make him immortal too. So he becomes a member of UQ holder, immortals who strive to help humanity, and as the episodes unfold, he meets more and more of his new allies, adding the female ones to his harem. 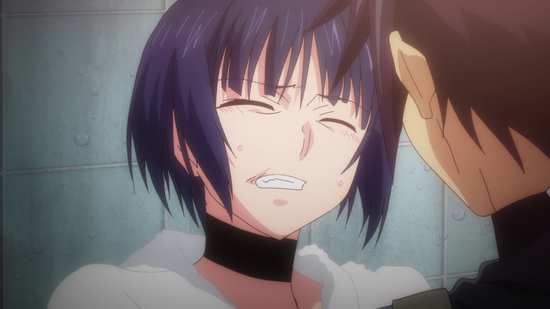 Kuromaru is the first, although Kuromaru is a future being yet to determine a gender. Meeting Tota tilts the balance from masculine to feminine though. Then there is Karin, devoted to Yukihime, an unrelenting warrior and instantly jealous of Tota. Shinobu is a normal human girl who works as a maid at the hot springs that double as an HQ for UQ Holder. kiriE is an immortal girl who can turn back time and repeat history, and Mizore has adopted her great-grandmother’s princess persona. There are male immortals as well, but I’ll give them about as much attention as the show does, which isn’t much. And all manner of harem comedy hijinks ensue as all the girls compete for Tota’s affection, when they aren’t beating him into the ground. 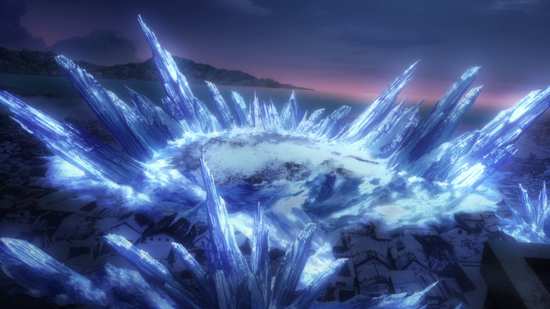 Now it could just be me. Nostalgia for this particular genre isn’t matched by a modern iteration of it, even from the master of the form Ken Akamatsu. Shows like Love Hina and Negima work best in the context of their eras, twenty or fifteen years ago. I just didn’t find it as funny, not even the OVA episodes towards the end of the collection, which are unmarred by references to Negima, or aspirations to a narrative for which there is patently no room. In fact I fell asleep. 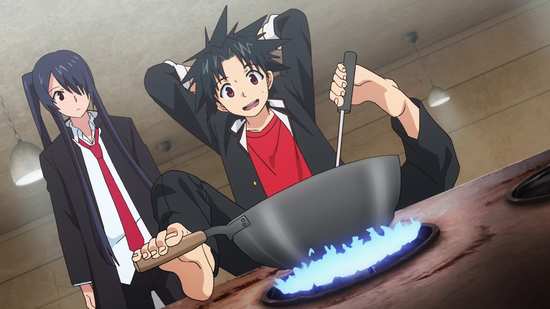 But those two problems do exist for the main series, and even if you aren’t burdened by the expectations of nostalgia, the poor, hyper-paced and poorly concocted narrative, the lack of character development, and constant referencing to a manga series which in reality was never really adapted to anime makes UQ Holder a disappointing series to watch. Even if you watched Negima! and Negima!?, you won’t know what UQ Holder is referencing. It just about gets its harem comedy right, in the same vein as the earlier Akamatsu shows but in this day and age, it just isn’t enough anymore.