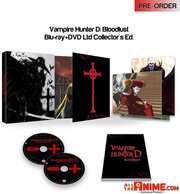 I finally get to watch Vampire Hunter D: Bloodlust, and get to see what all the fuss is about. It’s a little strange that I haven’t seen it before, as it was a big deal when I was getting into the whole anime on DVD thing back in the early 2000s. The DVD was on actual shop shelves in actual stores on practically every actual high street. It was in my local Woolworths! More importantly, it was a movie from Yoshiaki Kawajiri, director of films like Ninja Scroll and Wicked City, and my all-time favourite OVA, Cyber City. Then again, it is a movie about vampires, probably my least favourite anime genre. Bloodlust is itself a sequel to the original Vampire Hunter D anime from the mid-eighties. While Discotek in the US released both films on Blu-ray, All the Anime are only bringing the sequel to the UK at this time. Another thing worth noting is that Vampire Hunter D: Bloodlust’s original language is English; it was animated for that language. There is a Japanese dub, but it’s restricted by licensor to Japan only. 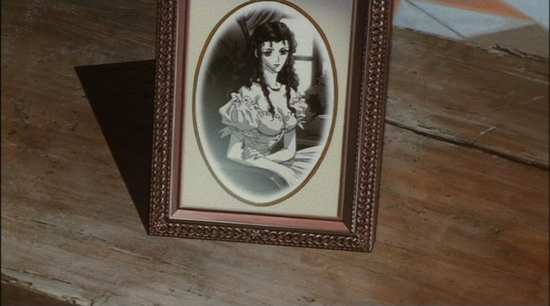 It’s the distant future, and vampires rule the world, but they are a dwindling race, helped to dwindle by the Vampire Hunters. D is a Dunpeal, half human and half vampire, and he is particularly skilled in bringing down vampires. When Charlotte Elbourne is snatched from her bed in the middle of the night by a vampire named Meier Link, her distraught father hires D to bring her back, one way or another. But D’s got competition, as the Markus brothers are also on Link’s trail. Yet as they pursue the vampire through this hostile future world, it seems that Charlotte may not have been abducted after all... 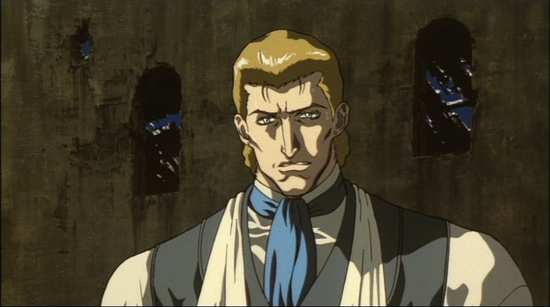 Vampire Hunter D: Bloodlust will be released on DVD and on Blu-ray, but the Collector’s Edition combo release with the physical extras is an All the Anime webshop exclusive at this time.

Vampire Hunter D: Bloodlust gets a 1.85:1 widescreen 1080p transfer on this disc. It’s a traditional anime, animated with paint on cels and captured on film, so the full Blu-ray resolution is put to work presenting the image. It’s clear and sharp certainly, but the issues come from the source material. While the print is clean and free of damage, it’s not in the best shape, with a distinct frame wobble throughout, and the print showing signs of age, with faded colours, blacks tending to grey, and lacking in dark detail. Given that the film has a lot of dark scenes; it doesn’t make it a great watch. When I compare it with the kind of restoration that Ninja Scroll received for its Blu-ray release, the difference is conspicuous.

The images in this review were sourced from the DVD, and aren’t representative of the Blu-ray. 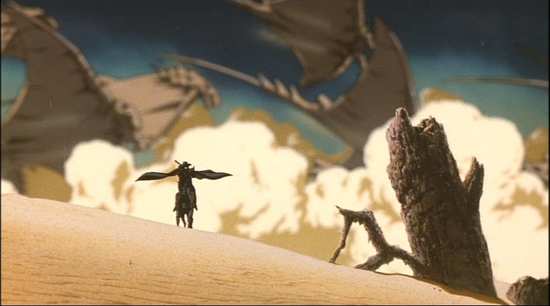 You have the choice between DTS-HD MA 5.1 Surround and Dolby Digital 2.0 Stereo English (the latter at 640kbps) with optional HOH subtitles. I managed about 15 minutes of the surround track. The surround is impressive, with action sent to all the speakers, really immersing you in the film. The problem is that the dialogue is low enough in the mix to be downright inaudible. If you turn the volume up to rectify that, the surrounds become loud enough to annoy the neighbours. I watched the majority of the film with the stereo track, and that was far more acceptable, even though the dialogue was still a little low. 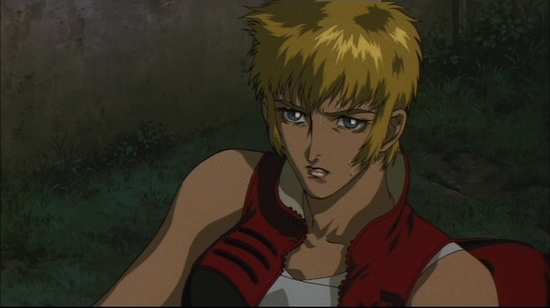 The Blu-ray presents its content with an animated menu.

You get US, Japanese and Korean trailers for the film (all with English dialogue) and in SD format.

The Behind the Scenes featurette runs to 22:51 SD and offers interviews with the creators, both Japanese and US, and behind the scenes footage of the voice actors at work. 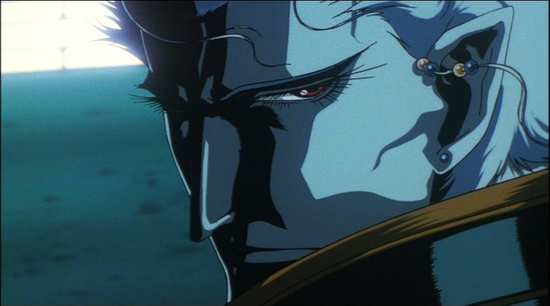 You get a Storyboard to Screen featurette lasting 6:56, and finally there is a 2:34 slideshow gallery, the latter in HD.

I haven’t seen the packaging or the physical extras to comment. 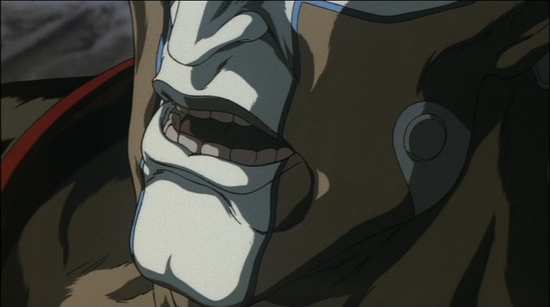 Well, that was tedious. I am not a fan of vampires in anime, and there have been few shows or movies to convince me otherwise. The weakest episode of Cyber City Oedo 808 was the Benten episode, the one with the vampire, and with Vampire Hunter D: Bloodlust, I once again felt my attention drifting, my eyelids beginning to droop, to the point that I had to watch the conclusion twice. It doesn’t help that the climax has one of those mind-bending hypnotic diversions as the protagonists have to fight their inner demons before the actual, physical confrontation. 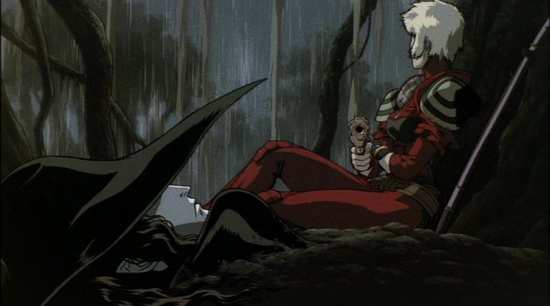 Vampire Hunter D seems to me to be an unimpressive halfway house between two other Kawajiri films, Ninja Scroll and Highlander: The Search for Vengeance. All three have their heroes and their villains, there’s a mission at stake in all of them where the antithetical male and female protagonists have to set aside their differences and team up to succeed, there’s a comedy sidekick for the male protagonist, and all three end in the same way, with only the male protagonist surviving to head off into the sunset, ready to fight another day. 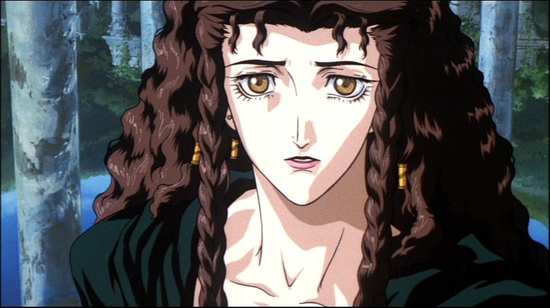 Vampire Hunter D takes the anime freak-show of villainy, the sort that made such an impact in Ninja Scroll and has another go here, interleaving the bloodsucking uniformity of the vampires with a diversion with the Barbarois group, fighters with all manner of supernatural powers and abilities, shape-shifting at the drop of a hat. Vampire Hunter D also introduces the battle of immortals through time, the long-lived vampires and the equally ageless D on opposite sides (but we only get a snapshot of time here covering the story), which is used to much better and appropriate effect in the Highlander anime. You can also see the evolution of the sidekick, with Dakuan a wizened old ninja helping/hindering Jubei in Ninja Scroll, and the sarcastic ghost Amergan taunting Colin McLeod in Highlander. In Vampire Hunter D, D has an intelligent parasite on his left hand to talk to. 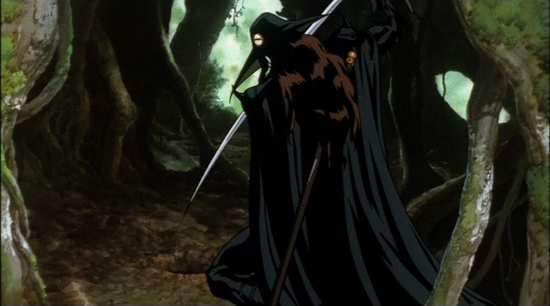 The story itself is interesting enough, an action adventure quest that sees two groups of Bounty Hunters chasing after the vampire Meier Link in order to rescue Charlotte, D and his parasitic hand, and the colourful Markus Brothers, five characters who look like they’ve escaped from a Trigun episode, including the female protagonist Leila. Their pursuit of Meier leads them into conflict with all manner of freaks and occasionally each other, especially given the prejudice that D faces as a Dunpeal, a half-vampire. There are plenty of freaky antagonists to marvel at, the same kind of provocative imagination with character design that Kawajiri is renowned for. There’s also a nice thought-provoking twist in the story. 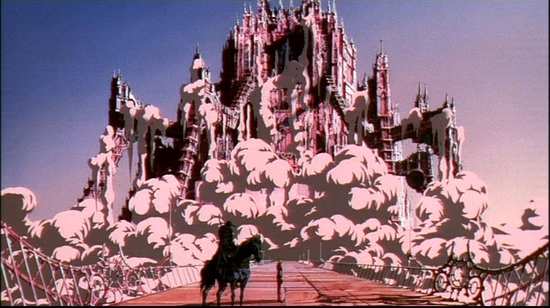 That all begs the question as to why Vampire Hunter D: Bloodlust didn’t appeal to me. I have to say that it boils down to the dub. That’s odd given that this was animated for the English, and you don’t get the awkward translations that have to fit extraneous words into a sentence to fill lip flaps (that’s what I was thinking right now, anyway). The dialogue is natural and flows normally. It’s just that the characters are so monotonous, even more so than the dull, dark visuals of the film. D himself barely has a pulse, Leila has less emotional response than a Vulcan, and these characters speak without cadence or liveliness. Even the most sharply written of dialogue sounds weak and insipid in this film, and it really is enough to put me to sleep. Once you get past the poor quality of the source material, Kawajiri’s animation is definitely worth watching, but the film itself will never be one of his strongest.