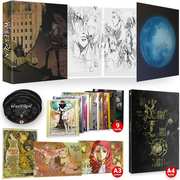 Synopsis:
Paradise - a legend, a myth, and a hopeless dream in a world that has become a wasteland. It is not meant for everyone, only the wolves, thought to be extinct yet still roam the lands. When the Flower Maiden awakens, the path to the end will open. Kiba, a lone wolf, wanders into a poverty-stricken city on a quest. The scent of Lunar Flowers and the will to find Paradise is all he has. Along the way, he runs into other outcast wolves - Tsume, High, and Toboe, each with their own story and troubles. Fate bringing them together, they seek out the Flower Maiden, Cheza, and their way to Paradise. But, doing so is no simple matter. Up against a world that fears them and a man with mysterious abilities, their journey is overrun with challenges and worse - sacrifices. With limited time, they must fight to protect Cheza against everyone who seeks her and discover the hidden path to their destiny.

This group of broken souls will form a pack and take their journey to the doors of Paradise. But is it worth the end of the world?