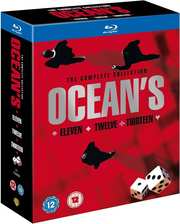 Danny Ocean has just completed a prison sentence for theft and as he walks out of prison, he has a plan. With the aid of his right hand man, Rusty Ryan he aims to put together a crew to pull off an audacious heist, the likes of which has never been accomplished. Danny Ocean aims to steal $150 million simultaneously from three Las Vegas casinos owned by Terry Benedict. He gathers a motley collection of criminal talent to help him pull off the heist including a Cockney explosives expert, a Chinese acrobat, a rookie pickpocket and a retired thief. No plan is perfect as they find when they get to Las Vegas, and it seems that Danny may have another agenda that could see the group betrayed. Terry Benedict currently is dating one Tess Ocean, Danny’s ex-wife and Danny could be fatally distracted.

Ocean’s Eleven gets a 2.40:1 widescreen transfer on this disc. It looks fantastic... at first. When you see Danny Ocean facing his parole hearing in that stark prison setting, all blue filters and strong contrast, you get the impression that this is going to be one sharp, cutting edge, high definition transfer. Only it’s not, although that filtered opening is an indication of what is to come. Ocean’s Eleven is a film that is religiously colour timed, and filtered to convey an atmosphere, and once you get to the casinos, to the Vegas setting, to the intricacies of the con (which let’s face it, is most of the film) then expect lots of rich, warm super-saturated colours, blown whites, crushed blacks, and a degree of softness that lies somewhere between DVD and BD. It’s watchable enough, although I don’t know how much more detail could be elicited from the film without compromising the original filmmaker’s intent. It does however look as if the BD is mastered from the same source as the DVD.

Alas, while the video does approach HD, the same can’t be said for the audio on this film, or indeed the others in the trilogy. You get the choice here between Dolby Digital 5.1 Surround English, French, Spanish, German, Italian, and Japanese, with subtitles in these languages plus Danish, Dutch, Finnish, Norwegian, Portuguese, and Swedish. The audio experience is passable enough, the surround design is effective, the dialogue is clear, except for when Brad Pitt is talking with his mouth full, but you would want a lossless track to make the most of this film’s action, and more importantly the excellent music soundtrack.

Warners released this disc early in the format lifecycle, which goes some way to explaining the A/V quality, and it also explains the bonus content on this disc, which is merely the DVD content repeated. There’s no main menu, the disc autoplays the film, and if you escape out of the film, you just get a listing of the extras, also accessible, along with the audio options from the pop-up menu.

So, you get the audio commentary from Matt Damon, Andy Garcia, and Brad Pitt again, the commentary from Steven Soderbergh and Ted Griffith, the 15:01 SD Making of, and the 9:40 SD Look of the Con featurette; all fun and interesting, but nothing new.

You also get the theatrical and two teaser trailers in SD.

From the moment that Danny Ocean enters his parole hearing, till the moment David Holmes’ 69 Police heralds the end credits, this movie is enthralling. I can’t recall having watched the original film, but this film stands alone as a carefully crafted and brilliantly scripted tour de force. Eschewing the copious violence and monosyllabic dialogue of many of Hollywood’s films, Ocean’s Eleven harks back to an earlier era in the best possible way. The script is tight and the dialogue is witty. The film has a rhythm that is fast and snappy, and the twists and turns of the story make this the rarest of animals, an intelligent Hollywood movie.

What surprises me is just how well the film stands up to being re-watched, after all, once you know the mechanisms of the con, the twists and turns, the surprises and shocks, you’d expect the film to lose its freshness, but it’s the quality of the characters, the strength of the writing that makes you want to revisit the film no matter how well you know it. The humour is natural and realistic, while the performances have a style to them that is very endearing.