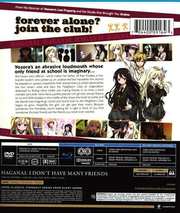 Haganai: I Don't Have Many Friends: The Complete First Season 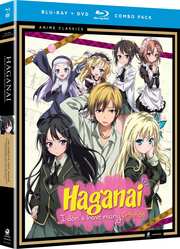 Synopsis:
Yozora's an abrasive loudmouth whose only friend at school is imaginary. She knows she's difficult - which makes her better off than Kodoka, a new transfer student who picked up an undeserved bad reputation the second he stepped on campus. Inspired by their shared status as social catastrophes, the two loners unite and start the Neighbors Club, an organization dedicated to finding other misfits and making friends.

In no time, a third member joins their ranks: Sena, a pretty, popular rich girl who annoys Yozora to no end. With Kodoka in the middle of the chaos, the brash brunette and the blonde boy-magnet go 'round and 'round, even as the Neighbors Club begins to grow. Hopefully, the girls can get past their rivalry, because sometimes the friendship you're looking for is right in front of you, and sometimes the best friends are the friends you never even wanted.