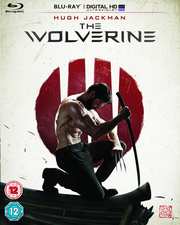 Review for The Wolverine

Would you believe that I still impulse buy discs? Of course in this day and age, that amounts to seeing something in a bargain bucket in a supermarket, but the fact remains that eschewing my usual route of extensive research in a film, doing the whole Blu-ray.com thing of finding the best international region free version, hitting the price comparison websites to get the best deal, I sometimes spy something interesting in a supermarket aisle and just take a punt. That’s how I got The Wolverine, a film I was vaguely interested in when it was released, but then soon forgot about it. I’ve found the X-Men movies and their spin-offs to be hit and miss; I certainly wasn’t going to get X Men Origins: Wolverine having watched it on TV and finding it wanting. But the fact of the matter is that my free time and TV broadcasts of movies rarely coincide, and I have more chance of watching the Blu-ray of The Wolverine for a fiver, than catching it on TV. Of course if I’d done the usual extensive research thing, I would have learned that for around 3 pounds more, I could have picked up the 3D version of The Wolverine, a 3-disc release which is the only way to watch the extended (2D) version of the film. It depends on the film whether I’ve dodged a slightly more expensive bullet, or if I’ll be kicking myself.

Following the events of The Last Stand, Logan has disassociated himself from the Wolverine moniker, indeed has disassociated himself from civilisation, preferring the solitude of the wilderness to better wallow in his guilt, following what he had to do to Jean Grey. But life has a way of calling people back, as happens when a Japanese girl named Yukio comes looking for him. A man from his past wants to see him. Logan first met Yashida during the bombing of Nagasaki, and saved his life. Now Yashida is dying, and wants to say his goodbyes. As Yukio reminds Logan, refusing a dying man would be dishonourable.

But the fact of the matter is that Yashida wants to see Logan for one last chance at immortality, offering him the gift of mortality in return. It isn’t to be, as Yashida dies soon after, while in his will he’s left his fortune and business empire to his granddaughter Mariko, shunning his son Shingen. Pretty soon, the Yakuza are after Mariko, even attacking at Yashida’s funeral. In the mayhem, Logan grabs Mariko and they go on the run. But keeping Mariko safe might just be impossible. Yashida failed to become immortal, but Logan somehow received his ‘gift’ anyway. Logan’s mortal now, and his wounds aren’t healing.

There’s not a lot I can really say here when a film gets a pixel perfect 2.40:1 widescreen transfer and an absolutely thumping DTS-HD MA 7.1 Surround English track. It’s a faithful representation of the film, with excellent detail, great contrast, and faithful colours, while the dialogue is clear even when the action threatens to overwhelm the speakers, and the unmemorable music drives the pace of the film. It’s all down to what you think of the source material, whether the fact it’s another teal and orange action movie will make your head sink in disbelief, whether you roll your eyes at some occasional unpolished CGI, or some poorly considered action sequences. There are flaws in The Wolverine, but not in its transfer to disc.

The disc plays an anti-piracy thank you before booting up its animated menu screen. This is one of those discs that holds its position in the player memory after being ejected, and it also pops up a progress bar should you pause the film or skip through it.

The big extra on the disc is The Path of a Ronin, a collection of featurettes which in total run to 53:54 courtesy of a play all option. They look at adapting this particular comic book story, filming in Japan and building sets, casting the film, and training up for the action sequences. It’s a nice, in depth documentary with input from all the key players behind the film.

The Wolverine certainly isn’t as disappointing as X Men Origins: Wolverine was, and in some respects is a really good comic book adaptation, offering a more layered and complex look at its title character than has been seen before. It could have been The Wolverine’s best celluloid outing to date, except for two scenes in the film that really let the side down (and given that one of the scenes is the climax of the movie, it really is to its detriment), and a couple of unsatisfying characterisations. The irony is that it’s the more comic book elements to the film that I find disappointing.

That becomes understandable when you watch the extra features, where they discuss the actual comic book that was adapted to the film, and the filmmaker’s desires to offer a more realistic look at the character, placing him in an alien situation outside his usual experience, and presenting that world in a more down to earth and rational manner than the other films in the franchise. So we have a Wolverine who’s suffering from a guilt trip at the start of the film, uprooted and transferred to Japan, where he’s supposed to say his final goodbyes to a man he saved from the Nagasaki bombing (an opening sequence that draws you right into the film), and then getting caught up in a family feud for power, with the yakuza thrown in to complicate matters. It’s samurai swords against adamantium claws and it’s a fantastic idea.

It’s made all the more fantastic when Wolverine loses his ultra-healing powers, becomes a mere mortal, albeit one with a bullet-proof skeleton. So he’s on the run with the heir to the Yashida empire, and he’s mortal, vulnerable, bleeding. It very much is in the vein of a comic book with a realistic veneer, and the film becomes a road movie thriller that’s very watchable. This, coupled with Logan going through the grieving process, dealing with the guilt over the fate of Jean Grey ought to make it a complex, engaging, and thoughtful comic book adaptation.

Except the thought and care that has gone into the characterisation of Wolverine in this film hasn’t been applied to the rest of the characters, most of who look like wafer thin statements of intent, rather than anything with depth. The weakest link has to be Viper, the femme fatale mutant who serves as villain in the film, who really just feels like a caricature, a genuine comic book character, lacking only a moustache to twirl.

Then there are those two set pieces that irk me so. One is the Bullet Train fight sequence, which in a movie that purports to a greater sense of realism, looks as goofy as the Channel Tunnel sequence in Mission Impossible. Then there is the final fight against the Silver Samurai, again suffering from a lack of intelligent characterisation, which contrasts even more given how well the rest of the film unfolds. It’s as if they thought they couldn’t have a comic book adaptation without a ‘big’ climax, when something smaller and more personal would have suited this film more. Then there’s my own personal nitpick of a lack of payoff for prognostication girl, Yukio, who made an interesting prediction at the start of the film, but which we never see unfold.

The Wolverine is something of a missed opportunity. There is so much in this film which is impressive, well thought-out and considered, especially the way it handles the title character, but there are a few too many weaknesses to let it really stand out, most detrimentally, the film’s ending. This is one title where I did in the end dodge a bullet by not shelling out more for the extended version.

Odd thing about this film is that it's actually a fairly close adaptation of the Claremont limited series, just with all of the quieter moments that really worked removed and substituted for the aforementioned 'action' sequences. Shingen should have been the primary antagonist as with the comic and Logan should have started the film in Japan, as teased at the end of the Origins film. It's still decent, but not as good as it could have been.
posted by Chris Gould on 28/8/2015 21:52