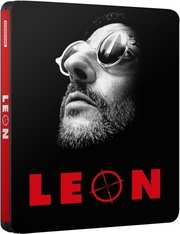 Leon is a cleaner, that is he is an assassin. He cleans up messes that other people make. He's very very good at it. In fact, he's the best. He lives in a aqualid apartment block, with just a plant for company. This is his life. That is until Mathilda rings his door bell.

Mathilda, a twelve year old girl who lives down the hall, has a squalid life with her abusive family and innocent younger brother. One day, a police officer pays her family and the corrupt cop slaughters her entire family. Taking refuge with Leon he takes her under his wing and decides to protect her. Slowly, the two bond. Mathilda tries to teach Leon about life, he then starts to teach her how to Clean. What then follows is a brutal array of violence and revenge.

When I did a bit of research on Leon I saw that it was currently Number 27 in the IMDB Top 250 Films of all time. Now, when I saw that I was shocked. Sure, I remember it being a great film and that it certainly deserved to be in the list, but in the Top 30? Above such films as Casablanca (28) Psycho (33) Apocalypse Now (43) or Alien (50)?

Then I watched it.

Yep. it deserved it wholeheartedly. Leon is one of the most brutal films I have ever seen... And also one of the best! I had forgotten just how great this film was and it is not hard to see the throughline between this film and Besson's Taken films and I can now see why people view those films as 'unoffical sequels' to Leon and a return to what Besson does best. And no his best is not having Chris Tucker as some mad DJ while Bruce Willis drives a hover cab.

The acting by the three main leads is fantastic and it has always surprised me that Jean Reno did not go onto bigger things (No Godzilla doesn't count!). Performance by Gary Oldman as the psychotic cop is amazing and if you didn't know, you would swear he was a New Yorker born and bred. The little things he did, the looks and mannerisms while he's taking his pill and the way he acts around other characters is so intensely creepy and wonderful to watch.

Of course the crown jewel of this film is the phenomenal performance by Natalie Portman and though it took her almost two decades and three awful Star Wars Prequels to nab an Oscar, you always felt like she would. Her performance is such a mix of innocence and coldness that it is surprising that Besson hasn't come back to her for a sequel about her character. However, I do feel at times that the character/actress are too young and the sexual tension between Leon and Mathilda can sometimes be a little creepy. I understand what Besson was trying to do and he does it wonderfully, but it does make a few of the scenes feel very uncomfortable, though I get the feeling that was the point.

The film itself is a strange mix, because it's not quite non-stop action, but there is so much going on, that you feel like this is the case. Leon training Mathilda is so powerful and her cold acceptance of the role with Leon explaining the rules of being a Cleaner is perfectly paced and performed. I would say that the opening and closing scenes could almost have come from Batman with Leon appearing and reappearing, taking people out with ease and you can't help but enjoy it, even if the violence can be a bit excessive and over the top. If I had to complain about anything I would say that there was simply not enough of Oldman's character and that maybe there should have been a bit more of a build up at the beginning to the family being killed as they are more or less blink and you missed them.

One thing that really lets this set down is the lack of extras. Now, I understand that having both the Theatrical Cut and the Director's Cut is supposed to be a nice bonus, but really most people consider the Theatrical Cut to be inferior anyway. Alhough there is twenty minutes of extra footage in the Director's Cut, I couldn't tell you where it is.

The lack of a commentary or even someone commenting in a featurette about the two versions is a shame as you may watch both and without going and reading up about what was cut and why you may wonder what the point was?

The two interviews with Actor Jean Reno and Composer Eric Serra are fine, but nothing special and that is all that's given. The lack of anything else makes you wonder why you should bother owning this set. Sure, if you are a huge fan of the film it does look great in a crisp print in high definition, but if you already own the DVD would you really need this for two new interviews?