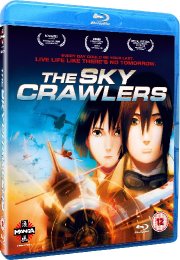 Blu-ray
Musashi: The Dream of the Last Samurai
Related Articles

Review for The Sky Crawlers

I first reviewed The Sky Crawlers for the site a couple of years ago just prior to its release, although the review disc that I received was a heavily compressed DVD-R, and I based my review more on the cinema viewing I had of the film a couple of months previously. My first instinct was to upgrade that DVD as soon as there was a convenient sale, but by the time that sale came around, I had caught up to the high definition bandwagon. Last year I picked up the The Sky Crawlers on Blu-ray instead, and it has languished ever since on my personal review pile. Thankfully, and gradually that pile is shrinking, and I now get to look at a film whose natural home is high definition. I’ve cut and pasted the meat of the review from before, while the technical stuff about the Blu-ray is new.

There’s a war in progress between Rostock and Lautern, and in the middle of the conflict, pilot Yuichi Kannami arrives at his new posting. But it’s a curious welcome. Getting out of his plane, he’s struck by an intense feeling of déjà vu. More curious is the fact that he is supposed to fly the plane of a previous pilot, Jinroh Kurita. The plane’s intact, meaning it wasn’t shot down, and the tradition is that the previous pilot meets the new pilot to get him up to speed on the machine’s particular idiosyncrasies. But Jinroh Kurita is nowhere to be found. It turns out that there is much more to this than meets the eye, most of it revolving around the base commander, Suito Kusanagi, and she isn’t at all that forthcoming about Jinroh’s whereabouts. Besides, there are bigger questions too. Rostock and Lautern aren’t countries, they are companies, and the ‘Kildren’ doing the fighting are employees. And what kind of war is fought solely with air forces, and why don’t the local residents feel any need to rush to an air raid shelter when enemy bombers fly overhead? As Yuichi investigates further into his predecessor’s disappearance, the war intensifies, and the dreaded ‘Teacher’ arrives in the battle arena, an ace pilot that no Kildren has been able to down. 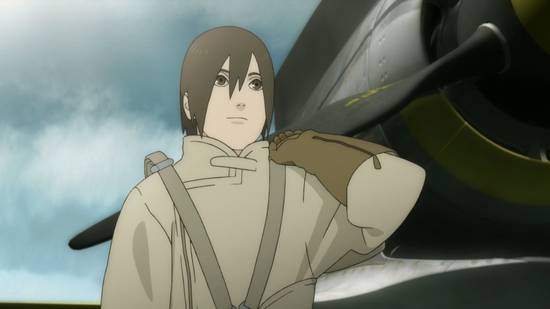 The Sky Crawlers gets a 1.78:1 widescreen transfer on this Blu-ray disc at 1080p resolution, and it’s a breathtaking image, clear, sharp and with exquisite detail. You get to see the intricate visuals, the stunning dogfight sequences and the engaging world and character design just the way they should be seen. The animation is smooth and flawless, you get the full effect of the pastel autumnal palette and the ethereal glow to the characters and it’s certainly far removed from that dire DVD-R I saw originally, and it’s up there with the cinema presentation for visual impact. The Blu-ray transfer isn’t quite perfect though, and digital banding is apparent at times, especially in the scenes of the sky during the flight sequences (although curiously not when the sky is viewed looking up from the ground), while there are rare moments of aliasing on fine line detail. It’s still a splendid visual presentation.

One thing that the enhanced visual quality of the Blu-ray does do is make much more obvious the disconnect between the 3D CGI planes and backgrounds, and the 2D characters in traditional anime style. There are moments where the seams show, and in recent features, animators have become a lot more adept in hiding those seams. 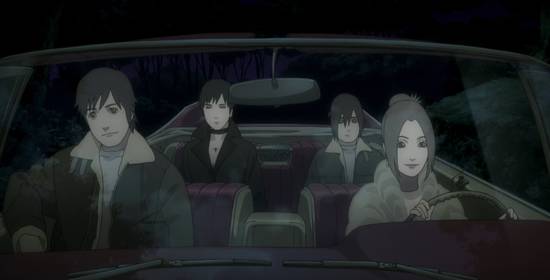 But that’s nothing compared to the audio, which is where The Sky Crawlers really excels. It gets DTS-HD MA 5.1 surround tracks in English and Japanese, along with PCM 2.0 stereo tracks in the same languages, with an optional translated subtitle track. The sound is awesome, the dogfight sequences shake the room, Kenji Kawai’s music comes across with rich clarity, and the complexity of the sound design really is apparent on the Blu-ray. Watching the film on a cold autumn night, I briefly forgot I had double glazing. In the scenes in the airbase, there is a subtle low howl of wind whistling through rickety windows, and it had me shivering in sympathy as I sat in front of the TV. You certainly don’t get it on the DVD, and I don’t recall it from the cinema either. I watched the Japanese version, and if I do have a nitpick, it’s that the English dialogue during the flight sequences isn’t subtitled, as some of the actors’ accents are pretty impenetrable. In that respect, the English dub is preferable during these scenes, and indeed the dub is pretty strong altogether, from what I sampled. 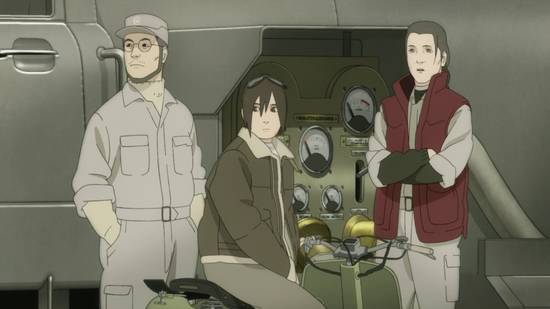 If there is one thing tacky about this release, it’s the animated and pop-up menus in the style of a fighter plane cockpit. But it does work.

The one extra this Blu-ray shares with the DVD is the Sky’s The Limit: Interview with Mamoru Oshii. It lasts 15 minutes, and intersperses a talking heads piece with clips from the film, behind the scenes footage, and production art.

The two other featurettes are unique to the Blu-ray and The Sound Design and the Animation of the Sky Crawlers is first, running to 32 minutes. It’s bookended with visits to Skywalker Ranch, where the sound design to the movie was constructed, but otherwise is a nice look at all aspects of the making of the film, from the animation to the music and ADR recording. 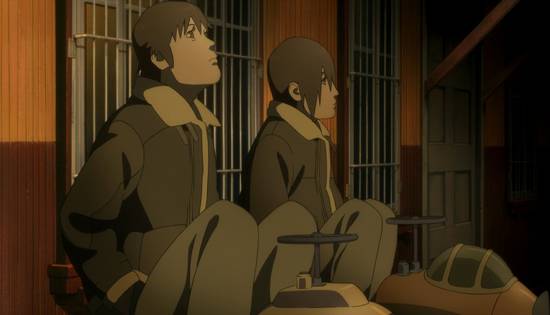 Animation Research for the Sky Crawlers takes the creators to Poland, where they do some location scouting for the movie, looking at some European architecture and aerodromes. They also try their hand at bowling. This lasts 31 minutes. These two featurettes could have used some text captions to indicate who the members of the production team were that were interviewed.

There are also three trailers for The Sky Crawlers.

All of the extra features are presented in 1080p resolution.

Question: How do you know when you’ve seen too many Mamoru Oshii movies?

Answer: When you’ve figured out the twist to The Sky Crawlers in the first half hour of the movie.

There I was coming out of the screening as the end credits rolled (missing the post credits coda along with everyone else), and most everyone was shocked, stunned, blown away, thrilled, excited, cheated, betrayed, and countless other reactions at what had just transpired. Myself, I couldn’t see what all the fuss was about, as I had figured it all out, less than a third of the way through the film, and it transpired mostly as I expected it to. Of course I’m not going to tell you what happens at this point, as quite frankly, The Sky Crawlers has just two things going for it, the twists and turns in the story, and the visuals. With just the visuals, it’s not likely to hold the interest for two hours. Incidentally, if you are thinking of getting this movie after reading the review for it in The Independent, don’t bother, as that review really does give it all away. 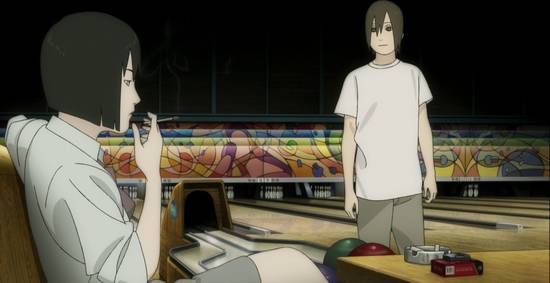 So what do you have to look forward to? The Sky Crawlers is the most aesthetically rewarding anime feature I can recall. Both in terms of visuals and audio, it is unparalleled. It’s a painfully beautiful film, with gorgeous animation, effortlessly blending 2D and 3D, with a carefully designed pastel autumnal palette that just glows. The character designs are simple and childlike, but the world design is lush and intricate. So much thought has gone into this animation, the designs on wallpaper and carpets, the patina on furniture, the reflection in a tabletop varnish, that you end up wanting the real world to look this detailed. The action sequences are astounding too. The film opens with an aerial dogfight between two propeller driven fighters, reminiscent of World War II movies, that leaves your mouth gaping wide open at the sheer scope and audacity of the animation, and the sound design is such that you feel the reverberations from the engines, experience every shell hitting fuselage. Then on top of that all is Kenji Kawai’s evocative and haunting soundtrack. It’s a film that draws you in and almost hypnotises you with its magnificence.

As for the story, that is typical Oshii, slow, measured, accomplishing more through implication and inference than any direct narrative, and working on several levels at once. The trademark basset hound is there as well. It’s a story that requires full attention from the viewer; it’s rich in philosophy and is deeply thought provoking, although nowhere near as blatant as Ghost in the Shell: Innocence. It’s the story of one man’s investigation of a mystery, trying to find out what happened to his predecessor, and in the process learning more about his own nature as well. But just like the Ghost in the Shell films, the central question comes down to the definition of the human soul, of what constitutes intelligence and free will, how much we are defined by our memories and how much is subject to our specific circumstances. There’s also time for a comment or two on the nature of warfare, especially warfare in the modern era, and how it relates to the twenty-four hour news-feed society, questioning whether humanity actually needs war as part of its psychological make-up. It’s could have been pretty dry and academic stuff, but it’s delivered in an engaging and dramatic way. However, I still find it a little distant and impersonal, and while there are moments of humanity and warmth, such as Yuichi’s developing relationship with Suito, and one scene where Yuichi and his wingman are bouncing on a couple of children’s playground rides, ridiculously outsized but intensely serious, these moments are few and far between. 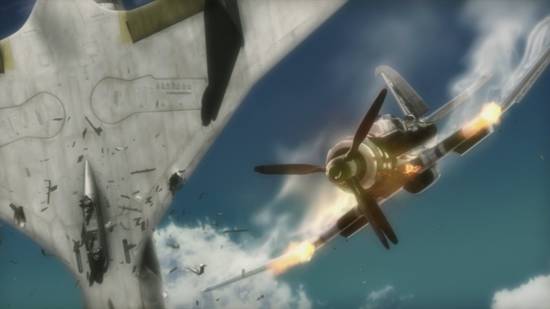 I found Sky Crawlers to be cold and not all that engaging, it’s also a little pretentious, and given that it covers ground that the director has already explored in earlier films, not a little redundant. It may have flying aces and dogfights, instead of cyberpunk and cyborgs, but the underlying themes are the same. I found it predictable, but your mileage may vary. But it’s a movie that is insanely beautiful and ethereal, visually evocative, the sort of anime that you just can’t tear your attention away from. It’s not a movie to enjoy; it’s a movie to appreciate. Mamoru Oshii has created an anime work of art. I can see this DVD and Blu-ray on countless collectors’ shelves, but I can also see it not getting that much repeat play.

That’s what I said two years ago, and my opinion hasn’t altered to this day. However, Sky Crawlers on this Blu-ray disc is breathtaking. It’s visually stunning, and the audio envelops you into its intricate fantasy world. If you have the film on that standards converted DVD, then it’s well worth the double dip, as the quality here is astounding. Still, Sky Crawlers isn’t the sort of film that you want to watch last thing at night before going to bed. It has a slow, meditative pace to it that is better appreciated after a cup of coffee or six.