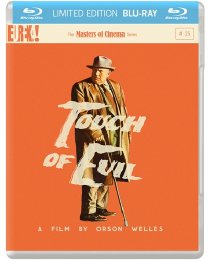 I'd forgotten what a fine film this is. I remember the first time I watched this, in a film studies class in 1980 on a very early VHS machine, and being utterly bowled over. I had enjoyed Welles 'Citizen Kane' though hadn't shared the 'best movie ever made' enthusiasm of my lecturer. For me, 'Touch of Evil' trumped it and seeing it again today (and several times in-between) I am of the same opinion.

Truthfully speaking that may well be because this was not a Welles driven film from the outset. It just became one. When Charlton Heston heard that they were considering Welles for one of the roles it was he who persuaded the studio to let him direct. The rest, as they say, is history and regardless of how the film came about, and who did what, it remains one of the finest films ever made. Technically it is breathtakingly brilliant, the cinematography absolute case book stuff, full of great invention. Casting and performances were universally great too, as was the soundtrack. And to top it all it's a damn fine dramatic story full of intrigue, pathos and emotion. A near perfect moving picture.

For me, the fact that it was shot in dramatic monochrome (when most other movies were beautifully colourful Technicolor) only adds to the films atmosphere and aesthetic.

So - before I get to this particular edition and why this is such good news too - that is why, I have awarded it 10 out of 10 on the 'like-O-meter'. Having turned in over 500 reviews for this site I have reserved that accolade for just one other release (you'll have to read all my reviews to find out which ) but I really do think this deserves all the praise that I can pour at it and more! No collection is complete without this.

'Touch of Evil' started out as a screenplay based on the novel 'Badge of Honor'which Welles had been punting for some time. Whether it's pure film noir I'll leave to film academics, but many of the key ingredients of the genre are correct and present though it's far more than just another in a long string of those.

The film features a youthful Charlton Heston (a real favourite of mine having appeared in a trio of my favourite 60' / 70's sci-fi's - Planet of the Apes, Soylent Green and The Omega Man) as a moustachioed Mexican Police Chief (Vargas) who, after his wife and himself nearly get blown away with a car bombing at the Mexican / US border at the start of the film, sets about investigating.

Soon his blonde American wife (Janet Leigh still fresh from her shower in 'Psycho') is kidnapped by a powerful Mexican hood who is trying to prevent Vargas prosecuting his brother. Every time he tries to make progress on the investigation he is thwarted by the cumudgeoness, ex-alcoholic American detective Hank Quinlan (Welles) who doesn't like Mexicans and thinks that justice needs a helping hand - even it that means breaking a few rules by planting evidence.

The film's focus switches from actual events to the battle between the two - and a question of how justice should be achieved.

It's full of the most incredible technical brilliance as well as signalling a first for the use of hand-held camera techniques, allowing the use of many non-eye level angles. The film opens with the most incredible single shot ever committed in one gulp to celluloid, pre-CGI. It's a tracking shot that starts with someone putting a bomb into a car which then gets driven down a street, the camera picks up Vargas and his wife walking in parallel and we hear their conversation as they move towards the border, along with the car. Every extra in the scene has to move through the scene at exactly the right time in the most complex piece of cinematic choreography I have ever seen. The shot culminates with a cut after a full two minutes plus of forward movement as the car explodes. (Apparently an extra ruined a first take when he messed up and turned to camera mouthing 'Sorry Mr. Welles'!), This amazing start, with Mancini's pulsing bongo-laden soundtrack really set up the film brilliantly.

Whilst Heston's performance is all lantern-jawed righteousness, Welles portrayal of Quinlan is anything but. A complex character ruined by drink and the evil he has fought, gone to seed and fighting to keep a foot-hold with the new gun in town. It's all played out like a Shakespearian tragedy, though always believable and never hammy.

This set comes with five versions of the film, original theatrical release with new linking scenes and the re-constructed version in two aspect ratios as well as the original preview version. The first is a re-construction based on a 58 page plea to the studio from Welles to reinstate his originally intended sequences, instead of the shortened edit they used for its theatrical release. This longer version plays brilliantly - though I don't recall being confused by the previous version which was the real thrust of Welles objection. But you can make up your own mind as both are included here.

The film looks good on Blu-Ray considering that the original camera negatives are no longer in existence, so is certainly the best you are going to see it, unless the original negs turn up. There is slight variance in the versions here but generally a pleasing, high contrast picture. The good news is that the film is so dramatically absorbing that you'll soon forget to even notice these minor differences.

The extras on this set are plentiful too. Four audio commentaries, featurettes, and a 56 page booklet too. Here's what you get in full.

Disc 2:
The set also comes with a  56-page illustrated booklet containing a 1958 review from Francois Truffaut, which appeared in French in Arts (June 4) and was collected in the 1975 anthology Les films de ma vie, translated into English in 1978 as The Films in My Life, an extract from renowned theorist and critic Bazin's Orson Welles [published posthumously in 1972, adding to writings originally published in 1950, which were in the process of being augmented at the time of Bazin's death in 1958], translated into English in 1978 as Orson Welles: A Critical View, text excerpted from Terry Comito's essay "Touch of Evil" in Film Comment, Vol. 7 (Summer), 1971, an interview with Orson Welles and an essay by Welles published in 1958 in the International Film Annual, No. 2. discussing the industry's transition from 1.37:1 to widescreen processes.

All in all, what every Blu-Ray special edition set of a classic movie should be. A great movie and a great presentation. You've just GOT to get it!!