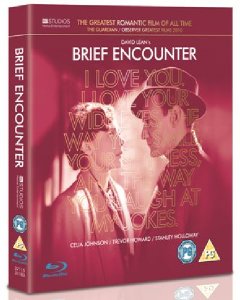 SPOIL THE ONE YOU LOVE THIS VALENTINE'S DAY WITH

'THE BEST ROMANTIC FILM OF ALL TIME'

AVAILABLE ON DVD AND BLU-RAY FROM 07 FEBRUARY 2011

Regularly appearing on lists of 'best films' and recently voted 'The Best Romanic Film of all Time' (The Guardian/Observer greatest films 2010), Brief Encounteris the perfect gift to give your loved one this Valentine's Day.

One of the finest romances ever produced in English cinematic history, the simple storyline of a married woman who meets a stranger and falls in love belies the intriguing complexities of matters of the heart.

Directed by the legendary David Lean and based on short story by Noel Coward, a master commentator on English manners, the film stars two of the cinema's most enduring screen icons, Celia Johnson and Trevor Howard.

So if you want a Valentine's Day that is filled with love, romance and a good few tears, then Brief Encounteris the one for you.

Synopsis
Brief Encounter tells the story of strangers Laura Jesson (Celia Johnson) and Dr. Alec Harvey (Trevor Howard) whose lives are changed forever when they meet in a railway café in 1940's England. Laura lives a content but predictable life with her husband Fred (Cyril Raymond) and their children, but her life is suddenly turned upside when a chance meeting with a mysterious Doctor leads her to question everything she knows.

This heartbreaking tale follows Laura and Alec as their unlikely friendship develops and they begin to fall in love. As their feelings grow they embark on a secret affair which sees them meeting up every Thursday at the café where they first met, and enjoying outings to the cinema together. Eventually the couple seal their fate with a kiss, and although Laura is initially elated at her new found love she is also wracked with guilt for betraying her husband. The couple's relationship is cut short when Alec accepts a job abroad and Laura decides she must honour her marriage and return to her marital life. Laura returns to her life with Fred and although she is devastated at losing Alec she realises that her view on the world has changed, and that her life is all the better for their brief encounter.