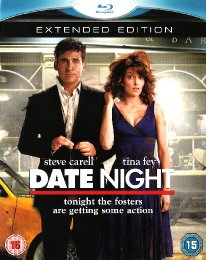 Bringing together two of American TV's best comedy talents (Steve Carell from The Office and Tina Fey from 30 Rock), Date Night is basically a film about a suburban couple, Phil and Claire Foster, who have been married for at least a decade and, with a full-time job each and extremely boisterous children, the spark has gone out of their relationship. They still enjoy each other's company and get on extremely well but, when it comes to their marital relations, they tend to find themselves too busy or tired to really put much time and effort into something that may well be interrupted by a demanding child.

One way they have trying to spice things up is by having a 'date night' every week where they go to a local steak house to have a date without children so they can relax, talk and try to recreate the feeling of what it was like when they were single and dating. During one of their book evenings at their best friends' house, they learn that this happily married couple are separating and will make things official when they have told the children. Concerned that, if it can happen to Brad and Haley, it could happen to them, Claire puts a great deal of effort into her appearance for date night and, feeling as if he must do something special to compensate, Phil announces that they won't go to the usual restaurant but drive from New Jersey into the city and eat at an exclusive new seafood restaurant. 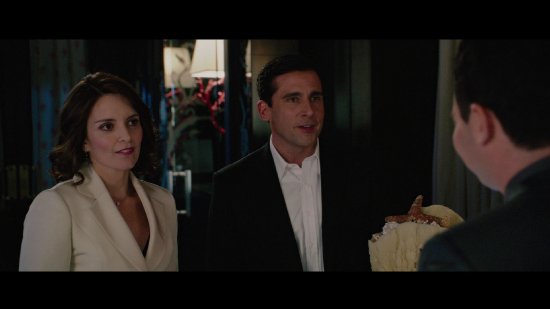 Although it is completely booked and, in order to get a table you need to phone ahead about a month in advance, Phil insists that they hang around by the bar on the off chance that the table becomes available rather than go somewhere else. When one of the waitresses has repeatedly asked for 'party of two, the Tripplehorns', Phil decides to take the initiative and announces that he and Claire are the Tripplehorns. With a very good table and enjoying the incredibly expensive food and wine, the evening is going extremely well until a couple of tough looking guys approach them and ask the Fosters to step outside. Assuming that they will be in line for a slight reprimand for stealing a reservation, they agree to follow the two men but, once in the alley, they pull out guns and demand that the Tripplehorns hand over a flash drive and stop blackmailing their employer. When the guys don't buy the story that it is all a case of mistaken identity and that the Fosters have no idea what they are talking about, one of them threatens to break both of Claire's arms and shoot her dead on the count of three. With this ultimatum, Phil suddenly blurts out that they do have the flash drive.

In all the panic, Phil tells them that the flash drive is in Central Park and, remembering a magazine article about the popularity of night boating, says that the drive is by the lake. The only problem is that the article was about night boating in Seattle so the Fosters have found themselves with a couple of armed gangsters in the most deserted place in Manhattan. It wouldn't be much a film if it all ended there so they find a way to escape, get back into the city and, using Claire's contacts, enlists the help of a Black Ops intelligence expert (played by an extremely muscular Mark Wahlberg, who seems extremely averse to wearing a shirt) to track down the real Tripplehorns, try and retrieve the flash drive, save their lives and get back to their kids. 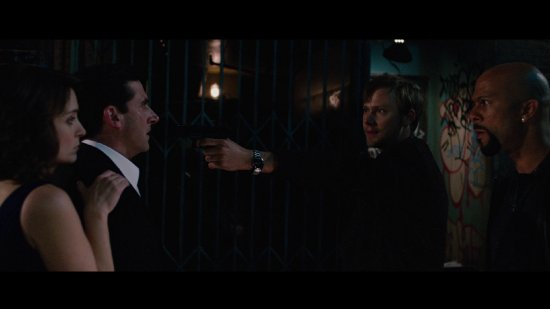 I always find Steve Carell to be a little bit hit and miss with the sort of humour that can work extremely well or just fall flat depending on how it is used, how much free reign he has and how it is worked into the plot. Tina Fey, on the other hand, appears to be much more consistent so it is fortunate that Date Night finds them both on good form. This is a strange mixture of a crime thriller based on mistaken identity and a household drama with fairly mundane situations but it manages to shift from one to the other quite well as the strange mix could end up being far more clunky.

I much more enjoyed the scenes with Claire and Phil in a restaurant than the ones where there is a car chase through Manhattan, they are dodging bullets or the entire NYPD becomes involved in proceedings and would quite happily have watched 90 minutes of the Fosters trying to work out their 'issues' without the aid of a plot device that is so far removed from plausibility that it really takes a great deal of goodwill on the viewer's part to buy into the whole concept. Nevertheless, Date Night is a fun, light-hearted and reasonably fast 102 minutes that never seems to drag or outstay its welcome. Aside from Carell and Fey, there are fine supporting performances by Mark Wahlberg, James Franco, Mila Kunis and Ray Liotta (who seems to be very fat recently!).

The Deleted Scenes (5:51, HD) can be watched individually or together using the 'play all' function and none of the four really demand reinsertion.

Alt City (1:50, HD) is just the series of outtakes that play alongside the end credits with the two leads improvising with various accents and different lines. Not exactly side spitting stuff, but something worth sitting through the credits to see.

Extended Scenes (10:30, HD) seems a bit of a strange edition given that this is The Extended Edition but there are a few seconds of footage in these that didn't make it into the longer cut of the movie but really, once you have seen the film, the extra footage is so short that it really doesn't seem worth watching this for. Like the deleted scenes, these can be watched individually or sequentially.

Directing 301 (21:50, HD) is a behind-the-scenes featurette with director Shawn Levy and featuring contributions from the first A.D., cinematographer, director's assistant and other members of the crew. It is a fairly revealing look into what actually goes on behind the camera and all the logistics of making a feature film when you have to deal with the elements as well as the extremely powerful Audi R8. 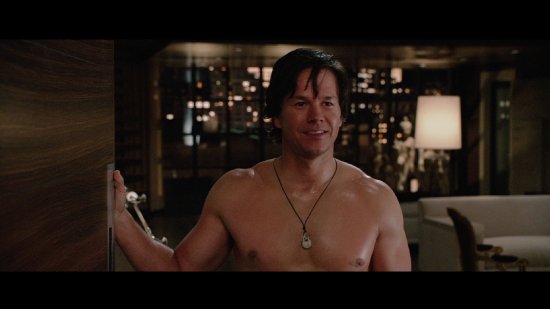 Disaster Dates (4:44, HD) is a series of interviews with members of the cast about bad dates they have been an or heard about -- Tina Fey's is probably the worst as she says that guy probably came out to her during a date! Even so, this is hardly the most awe-inspiring featurette you'll ever see.

Directing Off Camera (3:47, HD) is about 1:30 of Shawn Levy explaining what the featurette is going to be about and then just over two minutes of him giving direction to the actors while they are filming, particularly when the actors are in a static car against green screen reacting to non-existent bumps, cars and other dangerous events.

Steve and Tina Camera Tests (3:11, HD) is, as the name suggests, is a series of camera tests so Shawn Levy and other members of the crew could work out the right costumes, lighting, hairstyles and other aesthetic choices.

Gag Reel (5:50, HD) are even more bloopers that obviously didn't make it into the end credits and are only moderately amusing.

Lastly, and probably of least interest, is the theatrical trailer.

The set also comes with a Digital Copy so you can install it on the portable media player of your choice. 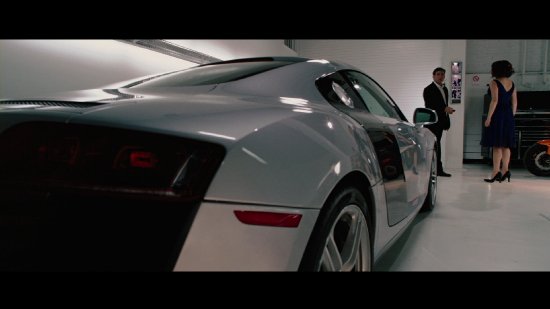 The Picture
Just as you would expect something only a few months out of the cinema, the 1080p widescreen picture is extremely clear and sharp with superb colours and contrast. The various locations and sets are all shot very well, much of it in Manhattan and even in Times Square which must have been a nightmare for a filming location. When it comes to action sequences, these are executed extremely well with a real sense of pace and comedy.

This shows how good digital films can look, shot on the Panavision Genesis camera, with none of the artefacts are problems with very light or very dark scenes that have afflicted some other films shot entirely digitally. 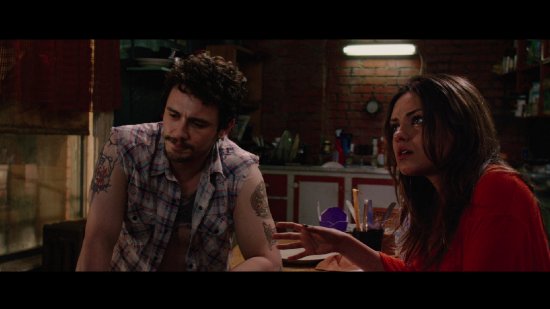 The Sound
The DTS-HD Master Audio 5.1 track is beautifully balanced creating a superb soundstage for the restaurant scenes where the dialogue is aided by quiet chatter and the sounds of people eating, drinking glasses and crockery in the background. When the film calls for it, the sounds of screaming tyres, revving engines and even a helicopter are reassuringly loud but take nothing away from the clarity of the dialogue.

There is a fairly good score and I was put in good move very early on when the film started with Blitzkrieg Bop by The Ramones (a completely opposite feeling to Closer, which began by featuring some awful dirge by James Blunt). 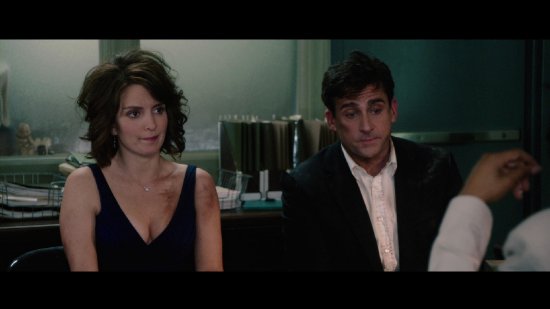 Final Thoughts
Date Night is an extremely watchable film with a snappy script and some fine ad-libbing by Steve Carell and Tina Fey which keeps things fresh and realistic as the response from the other actor can occasionally be one of genuine mirth. The plot may be ridiculously over complicated, but this is something that it seems the director/screenwriter realises and even plays on as Claire is no good at following films with complicated plots so, every so often, Phil has to explain what is going on to her and, vicariously, the audience.

My only quibble with this release is that it only contains the extended version and, because I didn't see this at the cinema, I have no idea what was added to the film to make it four minutes longer than the theatrical version. Ideally, the disc would contain both versions so you can choose which one you prefer; there are two versions of many films such as Alien, Dawn of the Dead and The Shining with the theatrical version better than the extended cut.

Anyway, I digress. Date Night is a very watchable film with terrific sound and picture quality and one worth watching on a dark evening for your own date night.