Retro Computers Ltd, the company behind the Sinclair ZX Spectrum Vega games console have today announced that they are giving away 12 Golden Vegas to customers for Christmas! The retro games console which, comes complete with 1000 licensed games built in, has been produced as a special limited edition of just 12 replica Vegas to be available to the public as part of this campaign. 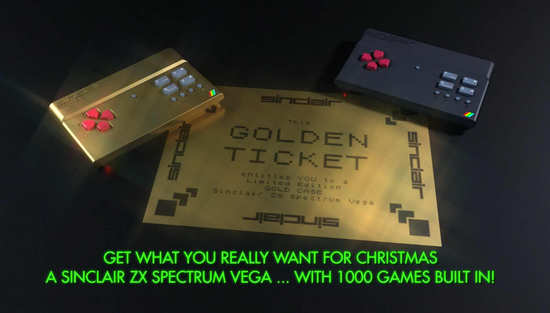 In each of the 12 weeks of “Clivemas”, leading up to the end of 2015, a “Golden Ticket” will be randomly given to one of the customers who have bought a Vega. Eleven of these tickets will be placed, one per week, in sealed Vega console boxes at randomly chosen online retailers carrying the product. A 12th Golden Ticket will be sent to one of the backers, also selected at random, of the Vega’s Indiegogo crowd-funding campaign. Everyone who has purchased a ZX Vega via the original campaign or by buying a retail Vega during the 11 week "Clivemas" period, will be in with a chance to win a Golden Vega.

The lucky winners will be invited to see the Vegas being made at the UK factory of SMS Electronics Ltd, where they will be presented with their ultra-rare, limited edition Golden Vega.

The Golden Vegas will never be on sale and are limited to this promotional give away only.

The campaign video can be found here