From the director of The Girl Who Leapt Through Time and Summer Wars, Wolf Children is coming to select UK cinemas around the UK from October 25th.

In March, Wolf Children scooped the prestigious Japan Academy Prize for Animation of the Year - an award that director Mamoru Hosoda also won with his previous film Summer Wars back in 2010.

Co-produced by Hosoda's own Studio Chizu and anime veterans Madhouse, Wolf Children earned over $50 million in Japanese cinemas, making it Japan's fifth highest grossing movie of 2012. Wolf Children has won multiple awards, not only in Japan but also in the US and Europe.

19-year-old Hana is studying at university when she falls in love with a mysterious classmate with a highly unusual secret - he is the last descendant of Japan's now-extinct grey wolves, and possesses the ability to transform into a wolf. Not daunted by this, Hana and her wolf man lover start a family, with energetic daughter Yuki ('Snow') soon followed by her more timid little brother Ame ('Rain').

But when tragedy strikes and her wolf man suddenly dies, Hana is left to cope with the two young children on her own - and both Yuki and Ame have inherited their dad's power to shift between human and wolf form. Moving to the countryside and the seclusion of an abandoned old house in the mountains, Hana hopes to raise her family away from prying eyes …but life's not that simple.

Manga Entertainment will release Wolf Children to DVD and Blu-ray on December 23rd. 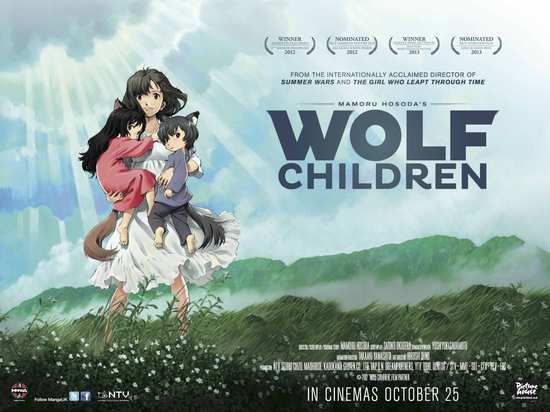