They began the year with the promise of four incoming licenses, one new, three classic, and just before the Telford MCM Expo, MVM revealed their fourth title as Iria: Zeiram the Animation, a sci-fi OVA series dating from 1994. MVM will release it later this year on just one disc, although a date has yet to be confirmed. It was previously released in the US by CPM.

When they unleashed a torrent of new licences a couple of weeks back, Manga Entertainment announced the license rescue of Last Exile, originally released here by ADV, along with K-On The Movie. They said that there wouldn’t be much point in releasing the latter without the second series, and that the reason they had the former might just be to do with the sequel. Then later, when they revealed their Q2 schedule, it turned out that K-On!! Season 2 had snuck on there. Last week, they also confirmed on Twitter that they will be releasing the sequel to Last Exile, currently being dubbed in the US. So we indeed will be getting Last Exile: Fam – The Silver Wing.

Distributor Developments Down Under

Australian anime news may not initially seem to relevant to us in the UK, until you remember that nearly all of the PAL converted anime that we get here is usually created by Australian companies for their larger anime market. It isn’t unusual to see Madman Entertainment and Siren Visual logos on anime that is released here by Manga Entertainment and MVM. Sometimes, UK and AU companies go halves on releases, as MVM did with Madman on their first Blu-ray release Broken Blade, and the forthcoming Kids on the Slope with Australia’s Hanabee.

Now there is a new distributor in the Australian realm, and it is a big one. When Geneon closed up shop in the US, its business was eventually bought out by Universal Japan, which is why recent Geneon releases through Funimation have had the Universal Globe logo on them. Previously, Madman Entertainment and Siren had expressed their difficulty in licensing and re-licensing Geneon properties, and this week it became clear just why. Universal will now release anime directly through their Australian distributor, Universal Sony, and that includes some new titles, and some former Madman titles. News at ANN.


The problem with a company the size of Universal is that it is a massive monolith, slow to move, and an order of magnitude harder for small independent anime companies to deal with. A case in point is that for Shana Season 2, MVM have opted to release Funimation’s NTSC discs, and it’s only now that news of an Australian, presumably PAL release, scheduled not long after has become apparent. If it had been a Madman title, we would have had it on PAL. Still, the prospect of Serial Experiments Lain on Region B Blu-ray does tantalise. 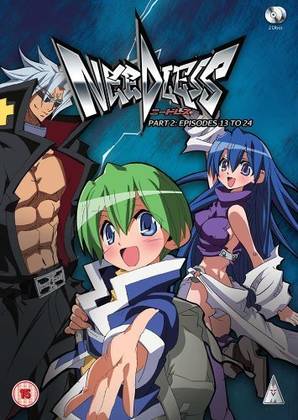 One anime review last week and it’s needless. No really, it is Needless Part 2. It’s not as annoying a title as Saw. Dumb name for a movie, but it does invite all sorts of wordplay when it comes to reviewing it. So let’s go with it... Do you need Needless? Not exactly, as this second half of the action series continues where the first half left of, with a long and potentially tedious fight sequence, set in one room. It could have been as bad as Bleach, but Needless has a couple of things going for it, a decent sense of humour, and some ridiculously daft characterisations. Click the review if you... need to...

Needless Part 2 comes out in general retail today, although MVM have been selling it through their Anime on Line store since February 4th.