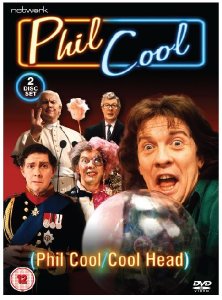 Our younger readers may not remember him, but just like with those bizarre orange sticky octopuses that walked down walls, we sure do. Yes rubber faced comedian Phil Cool is coming to DVD once more, in the form of his surreal series originally shown on Central Television in the late 80s.

Courtesy of Network Video, the double bill Phil Cool / Cool Head arrives as a 2 disk set on 20th August, with a recommended retail price of £19.99.

Obviously this is full frame, and the running time is about 300 minutes.

Both Cool Head and Phil Cool showcase his unique talents to the full, with a mix of stand-up comedy, sketches andastonishing rubber-faced metamorphoses; from Rolf Harris to Mick Jagger, Keith Joseph to the Pope, the Prince of Wales to ET, no-one and nothing is off-limits for Phil Cool! On-screen participants include the real Rolf Harris, Dillie Keane (Fascinating Aida), Jon Glover (Spitting Image) and Sophie Thompson (EastEnders).

Incidentally, this release is to coincide with the comedian's latest tour, dates of which are below: