DVD
The Two Ronnies: Series One

The New (In) Complete Complete and Utter History of Britain 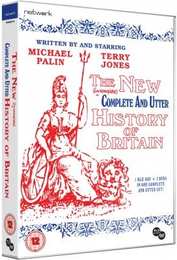 Synopsis:
Written by and starring Michael Palin and Terry Jones, The Complete and Utter History of Britain was a formative influence on television comedy and Monty Python's Flying Circus in particular.

Made in black and white in the same year that Python became part of the national consciousness, this rarely seen comedy takes a typically skewed look at British history – and reports historical events as if television had been around to cover them at the time! And so we find Richard the Lionheart relating his Crusading exploits in the manner of a laddish holidaymaker, medieval adverts and film trailers, and William the Conquerer engaging in post-match analysis (following an unspectacular scuffle in which King Harold is finally felled by a rogue baguette...).

In 2013, Palin and Jones revisited their series for this release. Taking the roles of joint narrators they comically, and seamlessly, link back to the best of the existing material shot by their younger selves in 1969 to create a brand-new feature: The Incomplete and Utter History of Britain 2013!